Rugby sevens team crashes out of group after three losses

Rugby sevens team crashes out of group after three losses 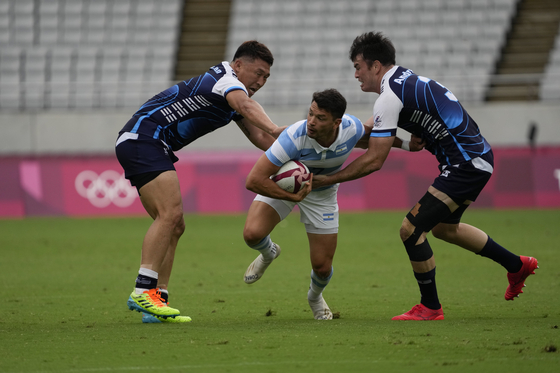 
The Korean men's rugby sevens team lost their final group game of the 2020 Tokyo Olympics 56-0 against Argentina on Tuesday, dropping out the of the tournament after taking on three of the best teams in the world.

Korea entered the Games as serious underdogs, a practically unrated team with a lineup with very little international experience, making their Olympic debut and their first appearance at a major international tournament.

Korea was drawn in Group A alongside rugby powerhouse New Zealand, reigning champions Australia and Argentina, a strong rugby sevens nation that blanked Korea twice in a pre-Olympics tournament.

Korea entered the Olympics facing three serious David-and-Goliath clashes, but in rugby, where size and strength matters so much, Goliath nearly always wins. As it was, Korea managed to score tries against both New Zealand and Australia, avoiding the shutout and proving that the team can get in a few blows of its own.

Against Argentina Korea could do little to avoid the shutout, with the closest attempt at a try petering out just meters in front of the try line in the second half.

Korea also had a rough time in a 9-12 placing game in the afternoon, losing 31-0 to Ireland. They will play one more game on Wednesday against Japan to decide who takes last place.