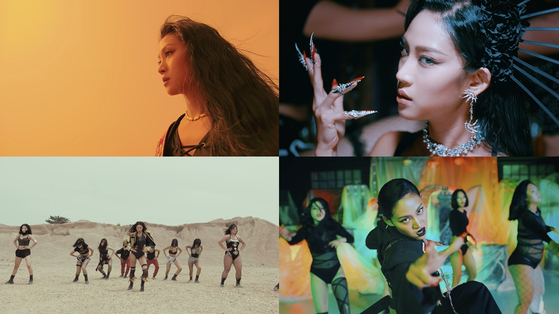 Scenes from Nada's ″Spicy″ music video teaser, which was released Wednesday. The full version is set to drop on July 31. [WORLD STAR ENTERTAINMENT]

Nada’s agency, World Star Entertainment, posted a 20-second-long clip on its official social media channels, which begins with Nada, carrying a bomb in her hand, walking across a vast desert like a female warrior. She then joins her backup dancers, who are also dressed as female warriors, and shows off some powerful moves.

“It’s her first release since Nada’s last digital single 'My Body,' which dropped last June,” stated the agency. “Therefore, she is working hard to prepare for the release of 'Spicy,' with hopes that the ‘spicy taste’ of the song will blow away the sweltering heat this summer.”

Nada made her debut as the rapper of girl group wa$$up in 2013, which unfortunately failed to grab the public’s attention, but rose to stardom through cable channel Mnet’s all-female hip-hop competition program “Unpretty Rapstar 3” in 2016 with her rap skills, witty remarks and easy-going manner.