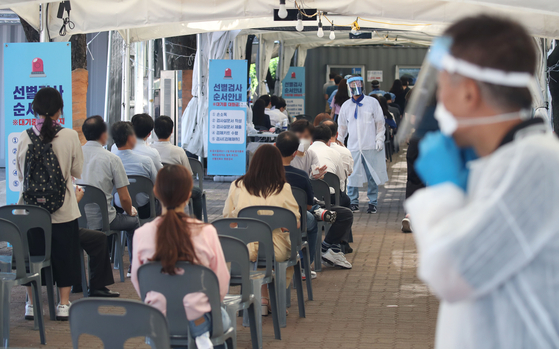 
Korea is advising university students from countries where virus variants are prevalent not to come back to classes until 70 percent of the population has received at least one dose of a Covid-19 vaccine — in September or possibly later.

The Ministry of Education announced Wednesday its policies to protect and manage foreign students in the second semester of 2021, which begins in the first week of September.

According to the Ministry, all international students must take three Covid-19 polymerase chain reaction (PCR) tests in total on arrival in Korea, the procedure for all arrivals these days.

Foreign students entering Korea must submit a negative Covid-19 PCR test result issued before departure from their home countries, and must use the self-quarantine phone application upon arrival.

A second PCR test is done at a health center near the quarantine location within 24 hours after arrival, and the last PCR test will be conducted before the end of the 14-day quarantine. Once tested negative, students will be released from self-isolation.

Students coming from countries where virus variants are prevalent are recommended not to enter Korea until 70 percent of the population has received at least one dose of a Covid-19 vaccine. That is supposed to happen by the end of September.

International students from those 26 countries entering the country before the 70 percent threshold is reached are advised to stay at a quarantine facility or dormitory not occupied by Korean students.

The previous record for daily new infections was last Thursday's 1,842, but that number included 270 infected crewmembers from the Navy’s Cheonghae unit destroyer.

The latest Wednesday record, however, reflects a surge in locally transmitted cases with 1,823, in addition to 73 imported cases.

It is the first time local infections topped 1,800.

Of the new cases, 568 came from Seoul, closely followed by 543 from Gyeonggi and 101 from Incheon, accounting for 66.5 percent of total local transmissions.

Patients reported outside greater Seoul rose to 611, or 33.5 percent of the total, surpassing 600 for the first time since the beginning of the fourth wave of pandemic.

Korea’s daily cases have hovered above 1,000 for 22 straight days as the fourth wave rages both in the capital and non-capital areas.

To stem the spread of the virus, Korea applied the highest distancing measures of Level 4 in the greater capital area since July 12, which will be applied through Aug. 8.

The country also enforced the second-highest Level 3 in non-capital areas, though some regions have adopted Level 4 measures.

Amid concerns that the strengthened distancing system isn’t curbing transmissions, health authorities said it has stalled transmissions in the Seoul Metropolitan area.

“Two weeks have passed since the measures were put in place in the Seoul metropolitan area, and we believe that the distancing measures blocked the rapid increase in transmissions in the Seoul metropolitan area and created a stagnation,” Sohn Young-rae, a senior epidemiological strategist at the government’s Central Disaster Management Headquarters, said during a briefing on Wednesday.

“It will be important to see over the next two weeks whether the distancing measures will turn the stagnation into a decline,” Sohn said.

Sohn warned that the government will consider even stronger measures.

While countries like Singapore, Israel and Britain are finding ways to coexist with the virus, it is "too early and not right" for Korea to adopt relaxed measures, he said.

In those countries, more than half the population has received at least one dose of a Covid-19 vaccine, while Korea is far behind.

As of Tuesday midnight, 34.9 percent of the country's population had received one vaccine dose, and only 13.6 percent has been fully vaccinated.

Meanwhile, amid concerns about supplies of the Moderna Covid-19 vaccine, Prime Minister Kim Boo-kyum said Wednesday that vaccine shipments will resume next week.

In an interagency meeting on the Covid-19 response, Kim said health officials discussed the matter with Moderna late Tuesday night in a video conference.

The government earlier said a shipment set to arrive in late July has been changed to August, after the company alerted the country of an unidentified “production issue” involving its Covid-19 vaccine.

“Moderna Inc. agreed with the government that it will supply much of its delayed amount for July next week, and will supply the pledged amount in August without any disruption,” Sohn said in Wednesday’s briefing.

Sohn stressed that there is no change to the inoculation plans for people in their 50s and people between the ages of 18 and 49.

Covid peak is over, says gov't, as rules to be relaxed