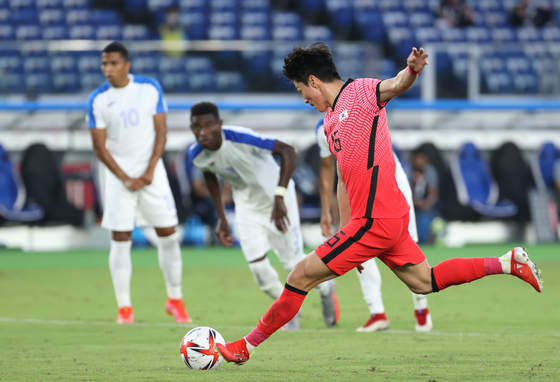 Hwang Ui-jo scores his third goal against Honduras at at International Stadium Yokohama in Yokohama, Japan on Wednesday. [YONHAP]


The Korean U-23 football team advanced to the knockout stage at the 2020 Tokyo Olympics on Wednesday, beating Honduras 6-0 in an incredibly physical game to end the group stage at International Stadium Yokohama in Yokohama, Japan.

Despite having been drawn in what was assumed to be an easy group, Korea entered the game level-pegging with all three teams in the group — all have a win and a loss for three points — but ahead on goal difference.

A win or a draw would have done it for Korea, as long as Romania and New Zealand didn’t pull off an exceptionally high-scoring draw in their game.

As it turned out, there was little reason to worry.

The two sides looked fairly evenly matched over the first 10 minutes, but that quickly changed in the 11th minute when an early penalty put Korea ahead. A foul on Lee Don-jun earned the penalty and Hwang Ui-jo sent the ball flying into the top left corner to put Korea up 1-0.

Five minutes later, Korea were back at the penalty spot after Jeong Tae-wook was tackled to the ground in the box while jumping for a corner. Won Du-jae stepped up this time, hammering in Korea’s second goal of the game.

Honduras continued to play a very physical game, matching each of Korea’s goals with a yellow card of their own. Kwon Chang-hoon was the next to fall foul of the aggressive approach, taking a hand to the face that left him bleeding on the ground after what should have been a fairly routine play.

The drama continued in the 38th minute, when Honduras’s Carlos Melendez received a second yellow card and was sent off, leaving the central American side with 10 men for the remainder of the game. Kwon took the free kick, sending it well over the bar.

Hwang added one more before the end of the half, picking up a deflection in the box four minutes into injury time and sending it into the back of the net, putting Korea up 3-0 with a one-man advantage after the first half.

Minutes into the first half VAR was brought into play with another penalty on the line, again with a Korean player brought down in the Honduran box. After reviewing the footage, the referee pointed to the spot, with Honduras taking another yellow card and Hwang scoring his third for an Olympic hat-trick.

Lee redeemed himself 20 minutes later with goal No. 6, slotting the ball under the goalkeeper into the bottom-right corner of the goal. Lee's was the final goal of the game and Korea walked away with a big 6-0 win.

Korea will now advance to the knockout stage where they will face the runner-up in Group A — either Japan, Mexico or France as of press time. That game will be on July 31 at 8 p.m.

New Zealand will also advance from Group B, taking on the winner of Group A.