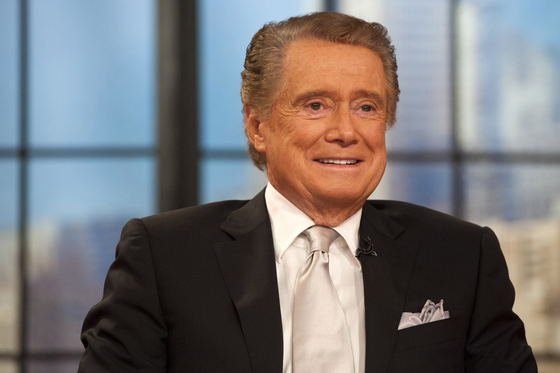 Regis Philbin, the genial host who shared his life with television viewers over morning coffee for decades and got rich along with some contestants with the game show ’Who Wants to Be a Millionaire,“ died on Friday, July 24, 2020. [AP]


Regis Philbin, the genial host who shared his life with television viewers over morning coffee for decades and helped himself and some fans strike it rich with the game show "Who Wants to Be a Millionaire," has died at 88.

Philbin died of natural causes Friday night, just over a month before his 89th birthday, according to a statement from his family provided by spokesman Lewis Kay.

"One of the greats in the history of television, Regis Philbin has passed on to even greater airwaves," President Donald Trump said in a tweet. "He was a fantastic person, and my friend."

After hustling into an entertainment career by parking cars at a Los Angeles TV station, Philbin logged more than 15,000 hours on the air, earning him recognition in the Guinness Book of World Records for the most broadcast hours logged by a TV personality, a record previously held by Hugh Downs.

He was host of the prime-time game show, "Who Wants to Be a Millionaire," briefly television's most popular show at the turn of the century. ABC aired the family-friendly program as often as five times a week. It generated around $1 billion in revenue in its first two years — ABC had said it was the more profitable show in TV history — and helped make Philbin himself a millionaire many times over.

Philbin enjoyed a side career as a singer that began when he sang "Pennies from Heaven" (1936) to Bing Crosby on Bishop's show. He said a record company called him the next day, and he made an album.

Even though the series "Regis Philbin's Health Styles," on Lifetime in the 1980s, was part of his lengthy resume, Philbin had health issues. Doctors performed an angioplasty to relieve a blocked artery in 1993. He underwent bypass surgery in 2007 at age 75.

He's survived by his wife, Joy, and their daughters J.J. and Joanna Philbin, as well as his daughter Amy Philbin with his first wife, Catherine Faylen, according to People.

Regis Philbin Who Wants to Be a Millionaire died 88