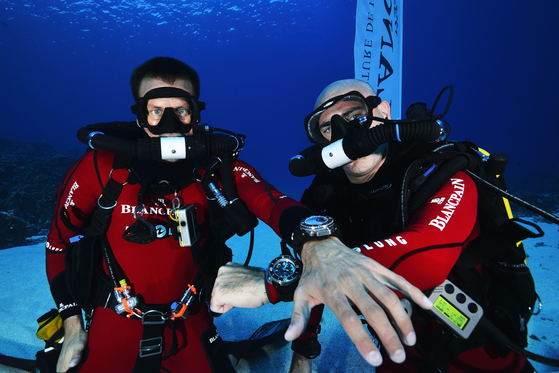 Marc A. Hayek, right, president and CEO of Switzerland-based luxury watch brand Blancpain, poses for a photo with the Fifty Fathoms watch during an ocean expedition. [BLANCPAIN]

Marc A. Hayek, president and CEO of Vaud, Switzerland’s Blancpain, is an experienced diver. His keen interest in scuba led the company to actively participate in campaigns that aim to protect the marine ecosystem.

According to Hayek, he briefly made eye contact with a big great hammerhead shark, also known as Sphyrna mokarran, in 2014 when he was taking the last test dive to become a certified technical diver. With that intense moment, Hayek became fascinated with marine life.

After learning that the shark is listed on the International Union for Conservation of Nature’s Red List as endangered, Hayek determined to take some action. The first step was to support the creation of a local association — the Mokarran Protection Society — to focus on the study of the situation in French Polynesia.

Hayek then decided to support the Tamataroa Project, which conducts studies about the ecology of the endangered species with the aim of initiating protection protocols in French Polynesia and along the shark’s migratory routes. Tamataroa is the local name of the great hammerhead shark in French Polynesia. 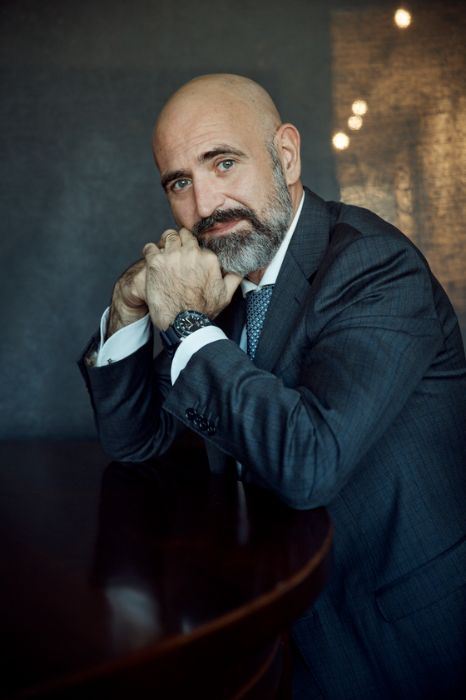 Marc A. Hayek, president and CEO of Blancpain. [BLANCPAIN]


The project includes a series of ocean expeditions led by French photographer and biologist Laurent Ballesta and his team, known as Gombessa. Blancpain supports them financially.

A documentary film the members recorded during an expedition — 700 Sharks into the Dark — has received more than 70 international awards, as well as the nomination for an Emmy Award. Two major additional expeditions have been scheduled so far, which will take place in 2022 and 2023.

Blancpain's close connection with the underwater world started in 1953 with the release of Fifty Fathoms, a diver’s watch. The watch helped professional and amateur divers track time underwater and contributed to expedition safety, according to Blancpain. The militaries of many countries including France, Germany, the United States and the Czech Republic, have used the watch. 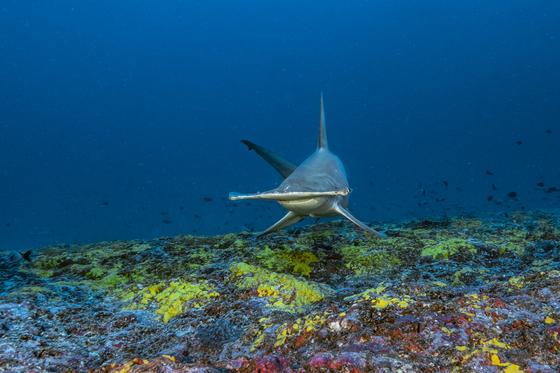 The great hammerhead shark is on the International Union for Conservation of Nature’s Red List as endangered. [BLANCPAIN]

“A decisive aspect for Blancpain is to contribute to improved knowledge of the underwater life by increasing interest,” said Hayek during a recent interview with JoongAng Ilbo. “Learning about marine ecosystems, their complexity and fragility is a key lever for action.”


Q. You are known as an experienced diver. How long have you been a scuba diver and how did you start scuba diving?

A. For as long as I can remember, I have spent my springs and summers on the coast of the Mediterranean when I was young. As a child, I was a big fan of Jacques-Yves Cousteau and spent lots of time freediving and snorkeling. I was particularly interested in fish life. I enjoyed being on boats or on shore, but it was the underwater world that fascinated me the most.

During my teenage years, my friends didn't enjoy scuba diving like I did. They just didn't share that fascination with the underwater world, so we spent our time doing other things. Then during my twenties, I met some people who shared the same ocean interests, and so I started diving more. Since then, the ocean has been ever-present. For over twenty years now, I have been devoting 90 percent of my vacations to scuba diving. In 2014, I acquired the certificate and became a technical diver.


What makes the Fifty Fathoms watch so special?

Blancpain's contribution to the ocean started as early as 1953 with the release of the Fifty Fathoms, which was a diving instrument created purely to fulfill the needs of divers. Having a reliable time measuring instrument was an absolute necessity for diving. By making diving safer, the Fifty Fathoms contributed to the opening of the underwater world. It helped oceanographers, marine scientists, photographers and the public discover the ocean, learn about it and appreciate it, and motivated them to contribute to its protection. 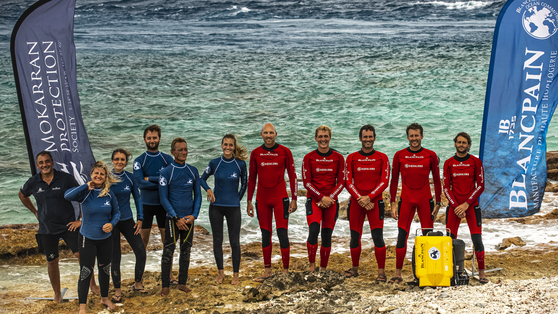 Supported by Blancpain, the Tamataroa project studies the ecology of endangered species in order to initiate protection protocols in French Polynesia and along the shark’s migratory routes. [BLANCPAIN]


What was the first marine protection project Blancpain supported and why did you choose that project?


Since the early 1950s, Blancpain has always been involved with diving. The Fifty Fathoms was the catalyst of our ocean initiatives. Working with and supporting divers, rather than projects involving submarines or robots, has a deep meaning for Blancpain.

In 2003, I decided to go a step further with ocean protection with the launch of the new Fifty Fathoms model. I felt keenly the necessity of studying the marine ecosystem for diver safety. In collaboration with non-profit organization Project Aware and charitable organization Shark Trust, we started a new program called the Whale Shark Project that aimed to protect whale shark. We were able to bring together the diving community, encouraging divers all over the world to contribute to the identification of whale sharks in order to develop a comprehensive set of data, which would help identify the needs for protection.


It seems like Blancpain emphasizes the need for ocean protection with a positive and beautiful image, instead of a provocative or negative image. What is the rationale for such an approach?

Personally, I react much more to ‘this is something to save’ than ‘this is something you are not allowed to do’ – as, I think, most people do. At Blancpain, we also believe that people can only respect and protect what they love, and can only love what they know. This is the reason why beauty represents one of the three axes that form the scope of the Blancpain Ocean Commitment. In terms of presenting positive messages about ocean, photography is key. Connecting through beautiful imagery is impactful and effective.


Are there any internal criteria for determining new project to support?

We offer support to what we feel is meaningful according to the three axes mentioned above. A decisive aspect for Blancpain is to contribute to an improved knowledge of underwater life by increasing interest. Learning about marine ecosystems, their complexity and fragility is a key lever for action.

Projects are also evaluated based on their overall relevance and credibility, as well as according to their potential to yield concrete and measurable results. We value a long-term vision, rather than immediate and short-lived impacts. This philosophy implies that we share a strong mutual sense of trust and engagement with our partners, which is especially necessary because we take an active role in the ocean initiatives we support. In the case of Gombessa expeditions, for example, the project expanded over the years and we clearly saw the benefits that it brought in advancing the public's comprehension of inaccessible and dimly understood underwater ecosystems. 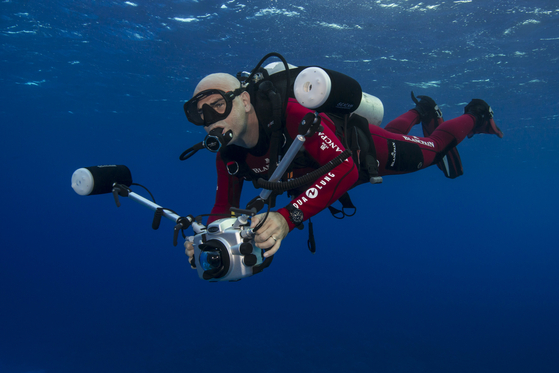 I wouldn't say that there is a direct correlation between ocean conservation campaigns and sales. Our ocean initiatives are part of authentic and global involvement, as well as a rich legacy in the field of diving and exploration that began nearly 70 years ago, which are, I feel, what people are receptive to. Customers, who look for meaning, appreciate Blancpain's honesty and implication. It’s not just about financial support and spending money. It is about acting, and offering a platform to spread the importance that the ocean plays in our lives. By making purchases, clients can contribute to that effort, and it's something they value.


I want to know more about Blancpain’s future plans and directions.

We have many projects in the pipeline, including long-term initiatives and new collaborations focusing on the implication of the local populations.

Of course, we will continue supporting our main partners, such as Laurent Ballesta. In a couple of weeks, the Arrecife Alacranes expedition, which we support as part of our three-year collaboration with Oceana, will start in Mexico. We have also recently announced our partnership with the Ocean Photography Awards, and launched the Female Fifty Fathoms Award, which will be unveiled in September. These are a few examples of the various initiatives that currently constitute the Blancpain Ocean Commitment.

As long as I am here, I will continue making it a point of honor to give back to the oceans, try to educate people, try to help, try to motivate people to protect them and preserve their beauty.

Oceans ministry to monitor radiation in the sea