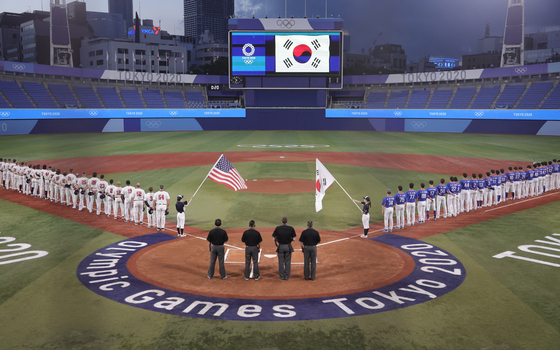 The Korean and American squads line up ahead of a Group B baseball game at the 2020 Tokyo Olympics at Yokohama Stadium in Yokohama, Japan. [YONHAP]


The Korean national baseball team dropped its second game of the 2020 Tokyo Olympics 4-2 to the United States on Saturday, finishing in second place in Group B.

Korea struck early at Yokohama Baseball Stadium in Yokohama, Japan on Saturday, hitting back-to-back singles to put runners on first and third with no outs.

Kim Hyun-soo was batting third, hitting a ground ball to second base, but reaching first before the throw to avoid the double play and drive Park Hae-min home from third.

But Korea couldn't capitalize on that 1-0 lead. Despite the early excitement, the second and third passed quickly with both teams looking fairly level.

It wasn't until the bottom of the fourth that the United States broke the silence, when Triston Casas blasted a two-run homer over the right field wall to take a 2-1 lead.

The U.S. was back again in the fifth with another home run — this one from Nick Allen to left field — before a string of singles brought home one more runner to take the score to 4-1.

Neither team was able to string together a couple of hits until the top of the ninth, when things started to get interesting again. Kang Baek-ho was walked to start the inning, with a Yang Eui-ji double putting runners on second and third.

Oh Jae-il — perhaps the biggest power hitter on the team — was up next, and had he been able to sink a big fly it would have tied the game. Instead, Oh had to settle for a sacrifice fly, bringing Kang home from third to take the score to 4-2. Yang at second meant Korea still had a chance, but a strike out and a groundout quickly ended that hope.

Finishing second in Group B means Korea still advances — in fact, every team advances in the Olympics' extended knockout format — it just leads the team down a slightly more difficult path.

While the United States advance straight to the second round of the knockout stage, where they are set to face Japan, who finished first in Group A, on Aug. 2, Korea has to first play through the first round.

Korea will take on the Dominican Republic, who finished second in Group A, at 7 p.m. on Sunday. The winner of the game will then face the winner of a game between third-place teams Mexico and Israel — scheduled for Sunday at midday — in the second round.

No team will be eliminated in the first round of the knockout stage. The two losing sides tomorrow will have a chance to compete in a series of repechage games to earn their way back into the competition.