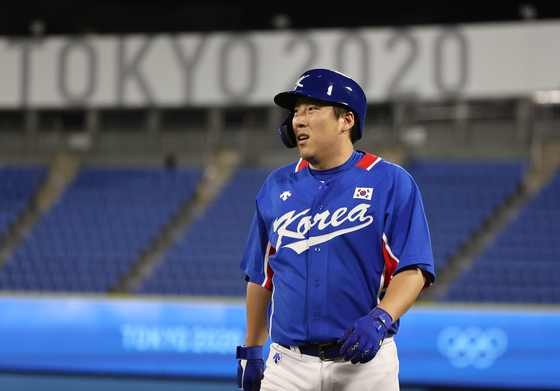 Kim Hyun-soo, who has led the Korean baseball team throughout the Tokyo Olympics, reacts in the eighth inning of a semifinal against the United States at Yokohama Baseball Stadium in Yokohama, Japan on Thursday. [YONHAP]


After 13 years as Olympic baseball champion, Korea’s reign has come to an end.

Instead, it will be either Japan or the United States that gets to claim that title in the gold medal game on Saturday. Having lost both semifinals, Korea’s only shot at a medal is the bronze medal game against the Dominican Republic.

The semifinal against the United States on Thursday, Korea’s last chance to earn a spot in the gold medal game, turned into the team’s biggest loss of the tournament so far.

Not for the first time, sloppy bullpen pitching was a big part of the problem, with an almost complete lack of run support compounding the issue.

What should have been a close game turned into a rout in the sixth inning, when Korea was forced to rotate through five pitchers as the United States continued to pile on runs.

After giving up a run in the second and fourth innings, Korea were down 2-0 but the lead was not insurmountable. A run at the top of the fifth took the score to 2-1, with Korea just a couple of knocks away from getting back in the game.

Everything fell apart in the sixth, when the United States drove in five runs — one for every bullpen pitcher Korea used in the inning — to take a huge 7-1 lead.

Korea attempted to rally quickly, scoring one at the top of seventh to take the score to 7-2, but the damage was already done. The United States heads to the final and a heartbroken Korean squad are left to try and pick up the pieces and bounce back for the bronze medal game.

Korea arrived at the Olympics as the reigning champion, having taken gold at the 2008 Beijing Olympics, the last time baseball was contested at the Games. The team headed to Tokyo hoping to defend that title, but it wasn’t to be.

Korea lost three games throughout the tournament, twice to the United States and once to Japan. In all three games they were out pitched and outgunned, unable to build enough momentum in the later innings to overcome the tough opposition.

Korea will now face the Dominican Republic in the bronze medal game at midday on Saturday. The two sides have faced off already in the competition — Korea won their first game 4-3.