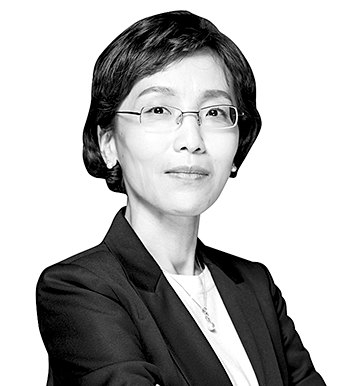 Ha Hyun-ok
The author is head of the financial news team at the JoongAng Ilbo.


There are only numbers. No matter how reassuring the figures the government presents are, the substance is not palpable, as if it were a mirage in the desert.

The government had to do something after soaring real estate prices did not show any sign of decline. In a joint press conference on Wednesday, Land Minister Noh Hyeong-ouk expressed a determination to “speedily proceed with a government plan to build 2.05 million units of apartments nationwide, including 1.8 million units in the greater Seoul area.” The figure of 2.05 million units is gigantic, the largest since the Roh Tae-woo administration’s ambitious plan in 1990 to build 2 million apartments.

When supplies are sufficient, prices fall. That’s what economy textbooks say. But the market is adamant about the government’s promise to supply the whopping 2.05 million units. Instead, apartment prices rise. Why? That’s because customers cannot trust the number the government announces.

The government’s scheme to build 836,000 units — the biggest share of the 2.05 million units announced on Feb. 4 — shows why it is so distant. In the press conference last week, Noh reassured the people that the government found in the Seoul metropolitan area candidate sites for starting to build 126,000 units within five months. However, less than 12 percent of the inner-city towns have received approval for redevelopment from their residents.

The third New Town Project could take a doomed path. Though authorities began receiving preliminary subscriptions for apartments, cash compensation for land owners has not been resolved yet. Unless the authorities finish the compensation timely, the round of main subscriptions scheduled for 2023 could be delayed further. In that case, no one knows when they enter a new apartment. If they win a preliminary apartment subscription, they must keep their status as “the one without home” until the time of main subscriptions. The more the groundbreaking day gets delayed, the longer their life as “rent refugees” gets.

That’s not all. The government pledged to use all available plots of land, including the Taeneung Golf Course and a driving test course in western Seoul, to build 48,000 apartments. But that project cannot even take off due to strong resistance from local residents.

The government’s dubious number game was extended to its Covid-19 vaccine procurement. The Moon Jae-in administration says there’s no problem with vaccine supplies, but we are dumbfounded at a widening gap between its words and actions.

The result is sheer chaos. Starting with suspended vaccinations stemming from a lack of supplies, the unprecedented “cross vaccination” and the stopgap measure of extending the interval between two jabs also followed. A man in his 50s was even informed by a clinic of its plan to replace Moderna vaccine with the Pfizer vaccine due to a problem with Moderna’s local production line. Facing a public outrage, the government hurriedly started consulting with Moderna to discuss ways to break the bottleneck. But it remains to be seen if the government can work it out.

In the face of a critical dearth of vaccines, the government says there’s no problem with supplies on a “monthly and quarterly basis.” The government stresses that it can give first shots to 70 percent of the people by September to help form herd immunity by November as it promised. As of July 29, however, only 13.7 percent of the people received two shots. And merely 35.8 percent have received their first jabs.

Assuaging the pain of the people by promising numbers on housing and vaccine is not only cowardice but also a dereliction of duty. The problem can be solved when people without a home find a place to live in and people without vaccines receive the shots. The world is full of numbers. But where are all the apartments and Covid-19 vaccines the government promised to deliver?