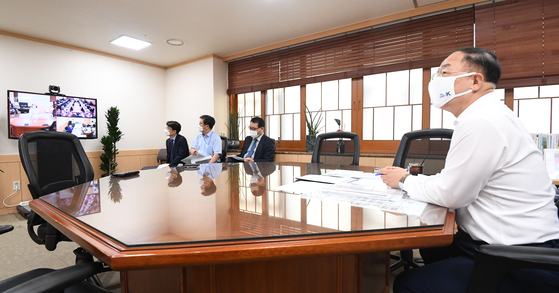 Finance minister Hong Nam-ki speaks at a meeting at the central government complex in central Seoul on Monday. [YONHAP]


Finance Minister Hong Nam-ki said Monday the government plans to pay more than 90 percent of pandemic grants under the latest extra budget to recipients by the end of September.

The goal is to disburse the emergency relief funds ahead of the Chuseok holidays, which start Sept. 20.

The National Assembly endorsed the extra budget of 34.9 trillion won ($30.3 billion) last month in a bid to finance another round of relief packages to small merchants and all Koreans except the top 12 percent by income.

When first created, the relief grants were paid to boost consumption to help the domestic economy. However, there have been growing concerns about the ongoing pandemic, with the number of daily cases exceeding 1,000 for nearly a month.
Finance Minister Hong has raised concerns about the fourth wave, especially as Delta variant becomes dominant.

“We have detected some changes in the economic recovery,” Hong said. “We will work on keeping the recovery on its current course while focusing on quarantine.”

Hong stressed the need to stabilize consumer prices especially as the prices of agricultural products are rising faster now with the hot weather.

The country's consumer prices increased more than 2 percent for the third consecutive month in June on higher prices of farm and oil products, according to the statistics agency.


In particular, eggs remain expensive even as the country has reported no cases of the highly pathogenic bird flu since April.

Hong said the government will make efforts to import more eggs and monitor distribution channels in a bid to increase the supply of eggs.