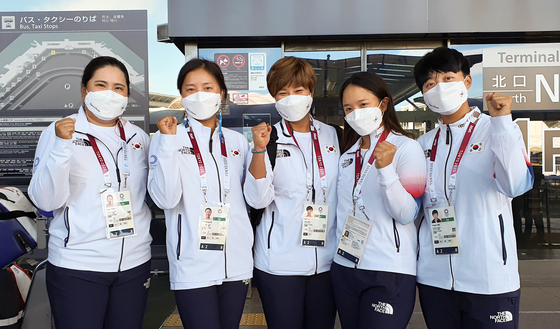 
With the women's Olympic golf tournament starting Wednesday, reigning champion Park In-bee and world No. 2 Ko Jin-young sat down with press to discuss the competition at Kasumigaseki Country Club in Saitama.

Korea's Olympic team — world No. 2 Ko, No. 3 Park, No. 4 Kim Sei-young and No. 5 Kim Hyo-joo — all came to Tokyo after competing at the 2021 Amundi Evian Championship in Evian-les-Bains, France last week.

Korea is one of only two countries with the maximum four competitors eligible to compete in the women's event in Tokyo, alongside the United States.

Both Park and Kim Sei-young were part of the Korean contingent in Rio, with Park ultimately walking away with the gold medal, making her the only women's golf Olympic gold medalist in history.

The LPGA Hall-of-Famer is looking to repeat that Olympic glory, once again alongside Olympic coach Pak Se-ri, who coached Korea at the Rio Games. Park In-bee's grandfather congratulates her after she won gold at the 2016 Rio Olympics, welcoming her at Incheon International Airport on Aug. 23, 2016. [ILGAN SPORTS]


Despite having finished 16-under-par, 268, in Rio, a big five shots ahead of runner-up Lydia Ko, Park was actually in the middle of a tough season and struggling with injuries.

“2016 was far most pressure-filled I've ever felt in my life,” said Park. “It is definitely much better and much more relaxing this year because of my condition, my conditions are not as bad as in 2016 when I had to deal with the injury.”

Tokyo marks the first Olympics for Ko Jin-young. She qualified for the big stage the same week she lost the world No. 1 spot after 100 weeks on the top.

“This week is like my dream,” said Ko Jin-young. “I'm really proud of being on the same team with In-bee and such good players, I’m proud of [the] Korea team.” 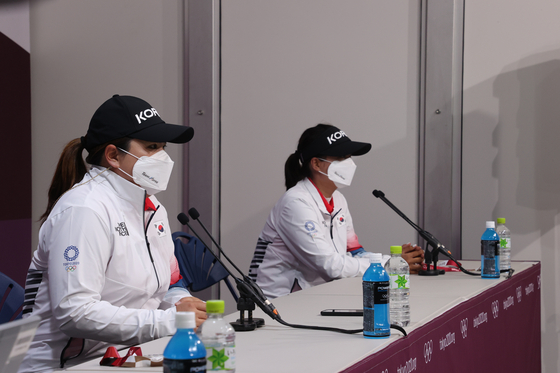 Park In-bee, left, and Ko Jin-young speak to reporters at a press conference at Kasumigaseki Country Club in Saitama, Japan on Monday. [YONHAP]


The two Korean golfers finished the men’s tournament on Sunday, with Im Sung-jae tying for 22nd and Kim Si-woo tying for 32nd.

“I did watch the men's golf last week and also I watched a little bit of Sunday as well when I got here,” said Park. “Everything was just stopping really quick and the men were hitting a lot of short irons into the greens, so I thought the course was probably playing short and probably very soft.”

Park has been on the golf course during the practice round, experiencing the course conditions for herself. 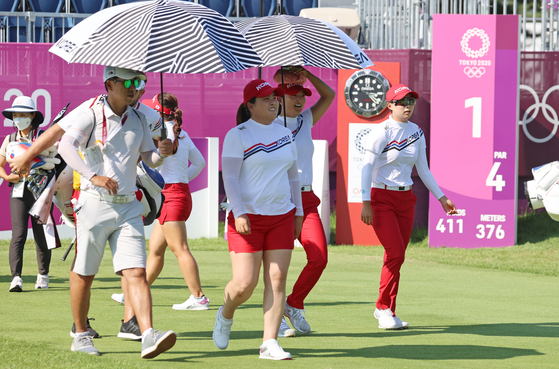 From left, Park In-bee, Ko Jin-young and Kim Hyo-joo practice on the golf course at the Kasumigaseki Country Club in Saitama, Japan on Sunday. [YONHAP]


“I went out there yesterday and the course was actually a little bit firmer than I thought and a lot longer than I thought,” Park said. “Compared with Rio Olympics, it's longer in the front and the green is a little firm.

“The greens are going to get firm with this weather and I don't know if we're going to get rain or not, but I think it's going to play pretty tough with the rough as well.”