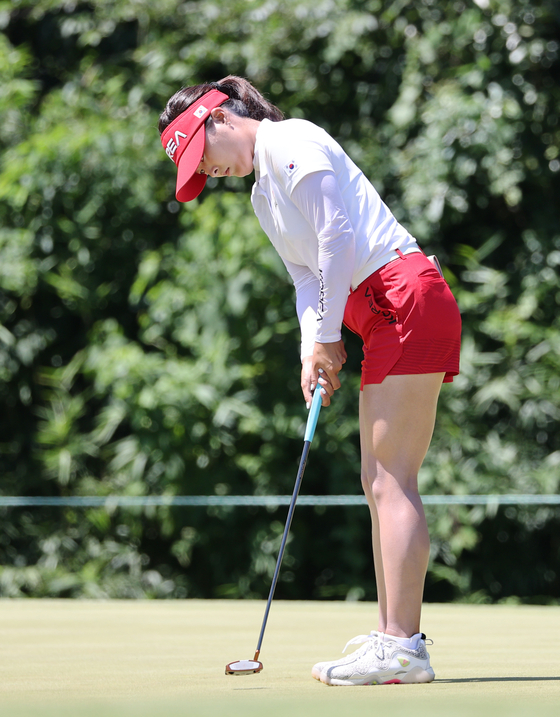 Ko Jin-young putts on the third hole during the second round of the Olympic golf tournament at Kasumigaseki Country Club in Saitama, Japan on Thursday. [YONHAP]


Ko Jin-young was the only of the four Korean competitors to remain in the top 10 after the second round of the women's golf tournament at the 2020 Tokyo Olympics on Thursday, finishing the round tied for sixth.

Ko had started the day tied for fourth at three-under par, 68, but slipped back in ranking despite actually having a better day on the course at Kasumigaseki Country Club in Saitama, Japan. Ko ended the second round at four-under-par, 67, for a total of seven-under, 135.

That puts her at sixth alongside Mone Inami of Japan, but still a huge distance behind Nelly Korda of the United States, who played an incredible nine-under round on Thursday to pull out ahead with a total of 13-under, 129.

While Ko slipped down the ranking, Kim Hyo-joo was the only of the Korean contingent to move up, jumping up five places to tie for 11th with a total of four-under-par, 138. Kim Sei-young is also tied for 11th, having slipped down from a seventh-place finish yesterday.

Reigning Olympic champion Park In-bee had a very disappointing round on Thursday at one-under-par, 70. As a result, Park slipped down to tie for 24th with a total score of 139, a full 10 shots behind Korda.

That ranking could prove more important than originally expected. With storms forecast in Saitama over the weekend and all Olympic events having to be finished by Sunday, officials are reportedly considering cutting short the golf tournament to end in three rounds on Friday.

If that contingency plan does end up happening — as of press time the decision had not been announced — then it may spell the end of Korea's hopes to take gold in the tournament. For Ko, overcoming a six shot deficit in two rounds could be possible to catch up with Korda, but doing so in one round is a lot less likely.

Reaching silver or bronze is a different story, however. Going into the third round, Ko is only two shots off second place, with Kim Hyo-joo and Kim Sei-young three shots behind.

Park would need to pull of something incredible to get back in the tournament, but Ko, Kim Hyo-joo and Kim Sei-young are still serious contenders.