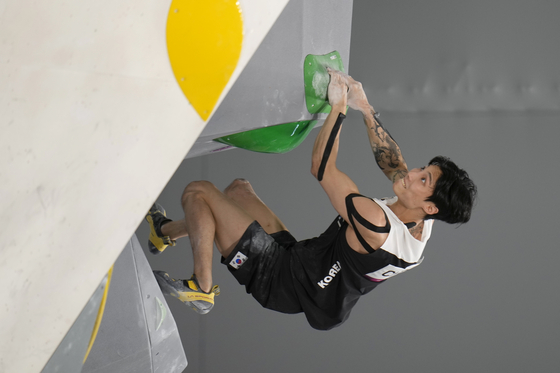 Chon Jong-won participates during the bouldering qualification portion of the men's sport climbing competition at the 2020 Summer Olympics on Tuesday in Tokyo. [AP/YONHAP]


Chon Jong-won finished 10th in the sport climbing combined qualifications on Tuesday evening, failing to advance to the final at the Tokyo Olympics.

At a brightly lit outdoor sport climbing wall, Chon competed as Korea’s first sport climbing Olympian at the 2020 Tokyo Games, where the sport made its debut.

Chon finished fifth in speed, where athletes compete to climb an identical 15-meter (50-foot) wall set at an angle of 95 degrees faster than their opponents. Chon’s hands slipped on his first try and he fell, but he climbed the wall on his second try in 6.21 seconds to finish fifth.

In the second discipline bouldering, where athletes climb different routes that vary in difficulty and are not revealed before the match without ropes within 4 minutes, Chon finished 10th.

In the last discipline, lead, athletes attempt to climb as high as they can on a 15-meter wall within 6 minutes. Chon held on for 2 minutes and 34 seconds, reaching more than 26 holds, but with world-class climbers like Jacob Schubert of Austria and Colin Duffy of the United States reaching more than 42 holds in over four minutes, Chon dropped down to 16th in the discipline.

With only the top eight climbers advancing to the finals, Chon dropped out of the Games finishing in 10th place.

Korea's climbing hopes aren't over yet — Seo Chae-hyun will compete in the women's preliminaries this evening.