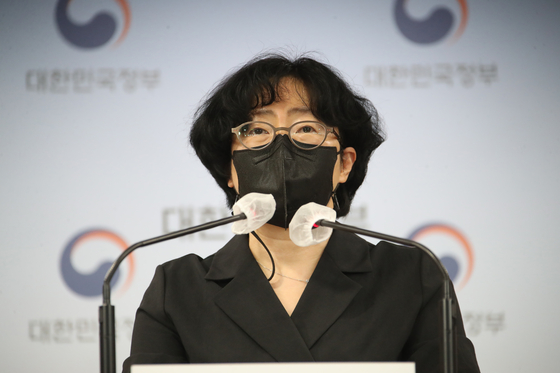 Yun Sun-jin, co-chair of the Presidential Committee on Carbon Neutrality, announces three proposals to achieve net zero carbon emissons by 2050 at the government complex in Seoul on Thursday. [YONHAP]

If Korea is to achieve carbon neutrality by 2050, renewable energy will have to account for 56.6 percent to 70.8 percent of total energy use — from roughly 6 percent today.

Nuclear energy's contribution could shrink to 6 or 7 percent from last year's 29 percent.

These are proposals in three scenarios sketched out Thursday by the Presidential Committee on Carbon Neutrality. It presented three ways Korea can get to carbon neutrality by 2050.

The first proposal suggests reducing carbon emission through technological development while keeping the current industrial structure, including power generation, manufacturing processes — and the use of fossil fuels.

According to the committee, seven coal-powered plants whose life expectancies run until 2050 will continue to be operated.
.
The second proposal cuts back on fossil fuels and substitutes liquefied natural gas. Many of its reductions in greenhouse gas emissions come through changes in lifestyles.

The third and most radical shuts down all fossil fuel generation — plants run on coal and LNG generators — while changing all hydrogen energy production to clean-energy green hydrogen.

Hydrogen fuels are currently produced by carbon-intense industries including refineries and steelmaking. Green hydrogen refers to hydrogen produced in cleaner ways, such as renewable energy generators and nuclear power plants.

The presidential committee projected that Korea’s carbon emissions will be reduced to 25.4 million tons a year under the first proposal; to 18.7 million tons in the second; and zero in the case of the third.

Changing the sources of power to be more environmentally friendly and using smart grids as well as decentralized supplies would help reduce annual carbon emissions in the energy sector from 83 percent to 100 percent, which would represent net zero emissions, compared to 2018's 269.6 million tons.

In transportation, the scenarios call for reducing carbon emissions from 98.1 million tons in 2018 by 88 percent to 97 percent by increasing the number of eco-friendly vehicles from 3.4 percent in 2020 to between 76 and 97 percent by 2050.

“While the first and second proposals — unlike the third — do not target net zero emissions, carbon neutrality could still be achieved through other means such as afforestation overseas, which is recognized by the Paris Agreement and the international carbon exchange market,” said Yun Sun-jin, the committee’s co-chair and a professor at Seoul National University’s Graduate School of Environmental Studies.

Yun said the proposals are not final.

The government plans to pick a final plan by the end of October after canvassing opinions of interest groups, energy scholars as well as the public.

The government has been working on the net zero carbon emission plans since January after President Moon Jae-in pledged the carbon neutrality goal in October.

The committee, which officially launched on May 29, has been reviewing plans in the last two months and narrowed them down to three.

The proposals were criticized by both environmental groups as well as businesses.

The environmental groups Korea Beyond Coal, Energy Justice Actions and the Korea Federation for Environmental Movement all criticized the first two proposals, especially the use of coal-powered generators, emphasizing that such an idea goes against the very idea of carbon neutrality.

The third proposal was attacked for a lack of specifics including the time frame for phasing out the use of fossil fuels.

The Federation of Korean Industries (FKI) said while it agrees with efforts to fight climate changes, goals can't be too ambitious considering Korea’s economy is still centered on manufacturing.

The FKI also criticized the plan to reduce nuclear energy, saying it is clean and reliable.