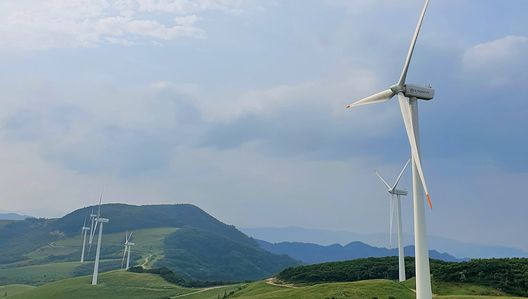 
The global race has begun to save the world from climate change and Korea, the planet’s 11th largest emitter of carbon, is bracing for big changes in what people buy and eat, how businesses operate and where the country gets its energy.

Korea officially joined the race after President Moon Jae-in declared last October that Korea will achieve carbon neutrality, or net zero carbon emissions, by 2050. In May, the government formed a 2050 Carbon Neutrality Commission and put it in charge of overseeing and reviewing carbon neutrality policies, and it was obvious there was no time to waste.

At the end of August, the commission introduced three proposals to make carbon neutrality a reality by 2050. The suggested pathways, though vague, vividly showed the gap between where Korea is now and where it needs to go. All of the proposals made evident that big efforts were going to be required from all parts of society including the government, businesses and the public.

According to the three scenarios, the biggest emissions cut should come from the power sector, which is responsible for over 80 percent of Korea’s greenhouse gas emissions.

This means the country needs to make a dramatic transition in its energy mix.


The most radical of the three scenarios calls for Korea to get over 70 percent of its electricity from renewable sources. And yet renewables accounted for a mere 6.6 percent of the country’s total energy generation in 2020, according to data from the Korea Electric Power Corporation.


Fossil fuels such as coal and natural gas accounted for over 60 percent of power generation. That portion needs to come down ideally to zero, or at least under 10 percent by 2050 under all three scenarios.


A more detailed path to 2050 will be introduced in the presidential commission's final proposal, which will be released later this month. This administration has already made some progress to reduce coal dependence and expand renewable power generation.

The government said it will retire six coal-fired power plants and convert 24 coal-fired plants to less polluting liquefied natural gas by 2034, according to the basic energy supply plan released by the Ministry of Trade, Industry and Energy last December.


“Some seem to think this dramatic increase on dependence on renewable energy is not realistic, but I have a very different understanding of what is realistic,” said Yun Sun-jin, co-chair of the 2050 Carbon Neutrality Commission in an interview with the Korea JoongAng Daily last month. “The climate crisis is ‘the reality’ and it’s only natural that we pursue a drastic transition in the energy mix to prevent the worst crisis from happening.” 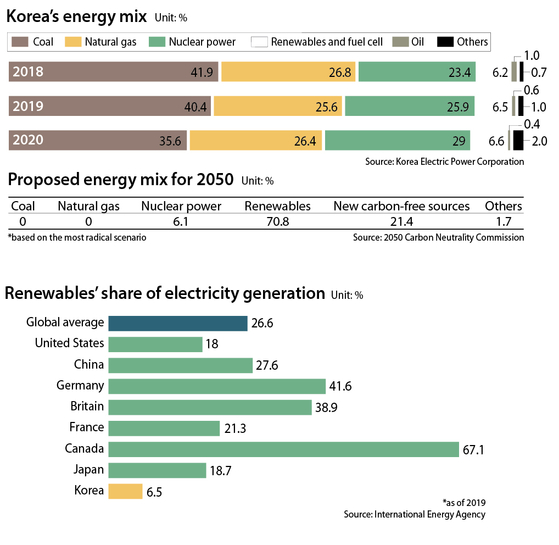 
The next step toward carbon neutrality after cleaner electricity supplies is making industries run on clean electricity and hydrogen fuel rather than fossil fuels like oil or gas.


Hydrogen is not an original source of energy. It has to be produced, and that is possible from a wide variety of sources — including clean renewables or dirty fossil fuels. Once produced, it becomes a carbon-free fuel that can replace dirty fuels.


The Korean government and local conglomerates are investing heavily in creating a hydrogen ecosystem encompassing all aspects, from hydrogen’s production to storing, transporting and utilizing.


Hyundai Motor, SK, Posco, Hanwha and Hyosung have vowed to invest nearly 43 trillion won ($36.3 billion) by 2030 into production, distribution, storage and utilization of hydrogen. Last month, they banded together to form a council to promote a transition to a hydrogen-based economy with other companies.


Steelmakers are working on hydrogen-based steelmaking technology that would enable them to replace bituminous coal in the steelmaking process with hydrogen. Another idea is to convert their blast furnaces to electric arc furnaces, which use electricity as the main source of energy for heating instead of coke.

Early this month, Posco, the country’s largest steelmaker, hosted the Hydrogen Iron & Steel Making Forum 2021 and invited global steelmakers to cooperate in developing hydrogen technology. It is also making efforts to supply itself with 5 million metric tons of green hydrogen — hydrogen sourced from carbon-free sources — by 2050 to ensure enough hydrogen is supplied when it adopts hydrogen-based steelmaking.

Posco has pledged to achieve carbon neutrality by 2050.

An even greater transition is taking place in the auto industry, where automakers are vowing to stop making internal combustion cars in the near future and replace them with electric or hydrogen fuel cell-powered vehicles.


Last month, Hyundai Motor promised to achieve net zero carbon emissions by 2045, earlier than the national deadline. The automaker said it aims for 80 percent of its global sales to come from hydrogen fuel cell and electric battery-powered cars by 2040. All new Hyundai Motor vehicles will be purely electric in Europe starting in 2035 and in other major countries by 2040.

Despite these seemingly tall ambitions by the Korean government and local businesses, skepticism remains whether Korea will be able to fulfill its ambitions in time.


On Oct. 8, the presidential body proposed a plan to raise Korea's emissions reductions target by 2030 to 40 percent of the country's peak in 2018, beyond the current target of 26.3 percent. This plan, though still subject to approval by the cabinet, means all the stakeholders including businesses and the public need to pick up the pace of whatever changes they were planning.


“To achieve carbon neutrality by 2050 we need futuristic technologies like hydrogen-based steelmaking and carbon capture, utilization and storage technology, however, these technologies are considered difficult to be commercialized by 2030,” said Woo Tae-hee, executive vice chairman of Korea Chamber of Commerce and Industry (KCCI), a major business lobbying group, in a written statement to reporters early this month. “This means it is hard to expect companies to cut emissions in the short term.”


Businesses are also uncomfortable making hefty investments in developing carbon neutrality-related technologies and changing their overall business processes when it's unclear whether the country will be able to ensure a stable supply of clean electricity by 2050.


“Even if businesses put efforts into changing their overall process of business, there would be no good in that if clean energy cannot be supplied sufficiently,” said Jung Eun-mi, senior research fellow and executive director at the Korea Institute for Industrial Economics & Trade on phone. “Uncertainties on green energy are a great risk for businesses. There needs to be a technological breakthrough that ensures a stable supply of clean energy for businesses to actively align with the government’s carbon neutrality drive.”


Concerns about the stability of the power supply have grown as this administration has been trying to phase out nuclear energy, which in 2020 accounted for 29 percent of the country's energy production, citing the dangers that rattled the public after the Fukushima nuclear disaster in 2011.

Nuclear energy supporters, of course, argue that nuclear energy is carbon-free, making it far cleaner than oil, gas and coal.


"If nuclear energy can be used alongside renewable energy, a more stable supply of electricity is possible while reducing the carbon footprint," said Jerng Dong-wook, president of the Korea Nuclear Society in a phone interview. "It is also a very economical way of producing energy in Korea."


Environmental groups mostly agree with the stance by the government to rapidly shift the energy mix so that renewable energy takes a greater portion and fossil fuels and nuclear energy are phased out, but they are asking the government to set even higher targets and make faster progress.


“The ideal portion of renewable energy in the energy mix is no longer a topic of debate globally as much as it is in Korea,” said Lim Jae-min, secretary general of local environmental group Energy Transition Forum Korea in a phone interview. “Other international organizations have set higher goals, and even the most radical target of around 70 percent is the minimum target set by the international community.”


According to a roadmap to 2050 published by the International Energy Agency in May, renewables should account for almost 90 percent of total electricity generation by 2050 for the global energy sector to achieve net zero carbon emissions by that time. A 2018 report by the United Nation’s Intergovernmental Panel on Climate Change also suggests that renewables should make up 70 to 85 percent of electricity by 2050 to limit climate change.


“There are excuses like the small plot of land Korea has to set up many renewable facilities or the fact that Korea’s electric power system is geopolitically isolated, making it hard to be flexible with the energy distribution necessary in managing renewable energy,” Lim said. “But looking at the resources potential of Korea, there is still room to dramatically increase renewable energy production and the government needs to be more supportive.”


According to Lim, the government needs to step in and help power generators settle disputes with local residents when setting up renewable facilities, especially wind power facilities, so more rapid growth is possible.


“A big difficulty for power generators is to settle disputes with residents because no Koreans are against tackling climate change but a lot of them are against having renewable power plants in their backyards,” he said.


Yun called for support from all members of the society to effectively cut down on emissions.


“What is important is the willingness to pay by the people because while many people agree to the need of change, a lot of them are not yet willing to pay for change,” Yun said.

“People need to invest in companies that are actually dealing well with environmental issues so companies that are not doing well realize they are going down the wrong path. People need to vote for candidates with pledges to tackle climate change so politicians start to change their [priorities.] They also need to become producers of energy by saving energy."


"The public needs to know that they hold the keys to change," Yun added. 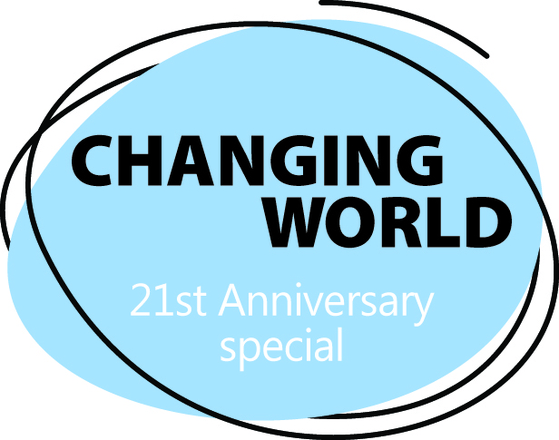 Korea can see a light at the end of the pandemic tunnel and has turned its attention to a “With Corona” future, similar to the “living with Covid-19” strategies being discussed in other countries.
But here and elsewhere, it’s a changed world, with a body politic newly concerned with the health of themselves and their loved ones, the vitality of the world’s intertwined economies, and the long-term prospects for the planet itself. Beyond the human losses, one thing Covid-19 reminded us is that there’s but one world, we’re all a part of it, and our world needs some changes — fast.
In this series of articles celebrating the 21st anniversary of the Korea JoongAng Daily, we focus on changes in two major areas: the energy we use and how to alter our daily lives to help the planet.
The energy sector is responsible for some three quarters of the carbon emissions that are changing our climate and threatening the human race’s viability.
We will look into how the government, power generators, businesses and the public are coming together to change the energy that drives our lives.
And as it’s obvious that all members of society need to take part in this global movement by contemplating changing to their lifestyles — from what they eat to what they buy — we will look at how a waste-free, environmentally conscious mindset is going mainstream in Korea. We will explore government regulations showing us how to reduce plastic waste; artists’ usage of recycled materials; people opting to go vegetarian; the growing popularity of the minimalist lifestyle; and the rise of that other, rapidly changing world, the metaverse.
- Ed.