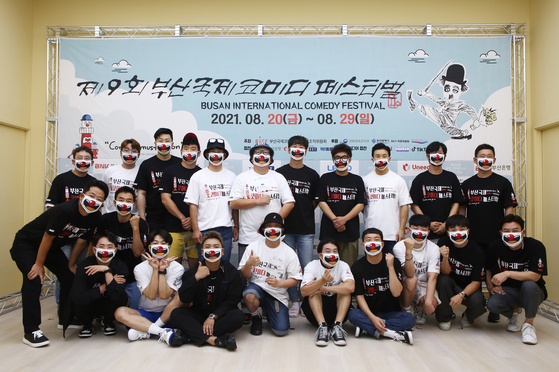 Comedians performing at this year's Busan International Comedy Festival pose for the cameras at a press event. [ILGAN SPORTS]


The 9th Busan International Comedy Festival (BICF 2021) is back to offer some cheer amid the ‘corona blues,’ from Aug. 20 until the 29.

On Thursday, comedian Kim Jun-ho, the executive chairman of BICF said during an online press conference that “The comedians’ passion for comedy is the driving force behind the festival, even though comedy shows have decreased significantly.”

Following last year’s BICF, the festival will be held offline in the Busan KNN Theater, Busan Cinema Center and the Shinsegae Department Store in Busan, as well as online platforms like Twitch and TikTok.

“BICF will continue to do its best to promote K-comedy to the world,” comedian and board member of BICF Kim Dae-hee said.