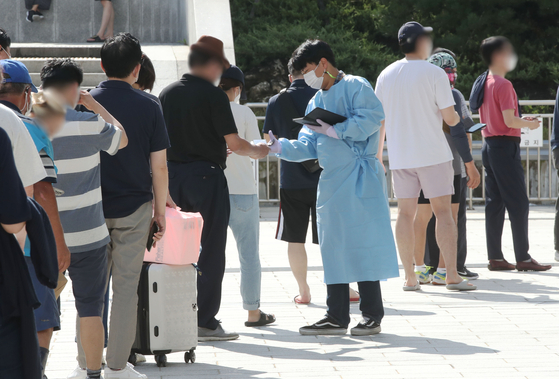 People stand in line to get Covid-19 tests at a screening station at Suseo Station in southern Seoul on Wednesday, the last day of the Chuseok holiday. [YONHAP]


President Moon Jae-in redoubled his efforts to make Korea a global hub for Covid-19 vaccine production with an intense round of vaccine diplomacy during his trip to the United States for the UN General Assembly.

Cytiva, a Marlborough, Massachusetts-based vaccine materials producer, will invest in Korea and signed a Korea-U.S. global vaccine partnership in New York on Tuesday with the president in attendance.

The company submitted a report to Korea’s Ministry of Trade, Industry and Energy for its plan to invest $52.5 million in Korea over two years from 2022.

It is the first case in which a global vaccine material producer has committed to investing in a new manufacturing facility in Korea since the outbreak of Covid-19.

“Cytiva’s decision for the investment in Korea seems to have been attributed to Korea having the second-largest biopharmaceutical production capacity in the world,” the Blue House said.

The MOUs with drug firms, which are small- and medium-sized or venture start-ups, included cooperation in vaccine materials, components and equipment, joint development and consignment production. 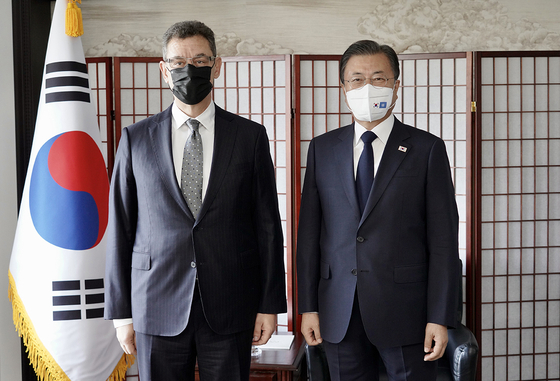 In addition, the Korea Research Institute of Bioscience and Biotechnology (Kribb) and the University of Pennsylvania will cooperate in research on mRNA vaccine carriers.

“It is a significant achievement attained in four months after agreeing to establish a global vaccine partnership between Korea and the U.S. at the White House summit in May,” President Moon said during the ceremony.

Earlier in the day, Moon met with Albert Bourla, the chairman of Pfizer, and requested smooth additional shipments and early supply of vaccines.

President Moon expressed hopes for purchasing more vaccines in addition to the first vaccine contract for next year, and stressed the need to receive the contracted amount as early as possible due to the use of booster shots and expansion of the vaccine eligibility age, Blue House spokesperson Park Kyung-mee said in a press briefing.

Korea inked a deal with New York’s Pfizer in August to purchase 30 million doses of its vaccine for next year.

There were also discussions on the issues of giving booster shots to people of all ages and the vaccination of children.

Regarding booster shots to the general public, Burla said they are necessary, citing the cases of Israel, France, Germany and Britain.

Burla also mentioned a recent study showing that only one-third of the Pfizer dose given to adults was enough for children aged 5 to 11.

As a result, Korea is expected to receive one million doses of Pfizer from Britain in stages starting this Saturday.

The doses arriving from Britain will be used for inoculating people who haven’t been vaccinated yet, and as second shots for those aged 18 to 49, health authorities said Tuesday.

Health authorities announced Wednesday that Korea will ship the jabs in batches and return the total amount by the end of the year.

Moon also sat down for talks with Vietnamese President Nguyen Xuan Phuc on Tuesday and agreed to provide the country with more than 1 million vaccine doses by the end of next month.

It is the first direct provision of vaccines from Korea to a foreign nation, except for financial support through the COVAX Facility, the World Health Organization (WHO)'s vaccine-sharing mechanism, to which Korea has pledged to donate a total of $200 million to supply vaccines for lower-income countries.

The Blue House did not specify the vaccine type. 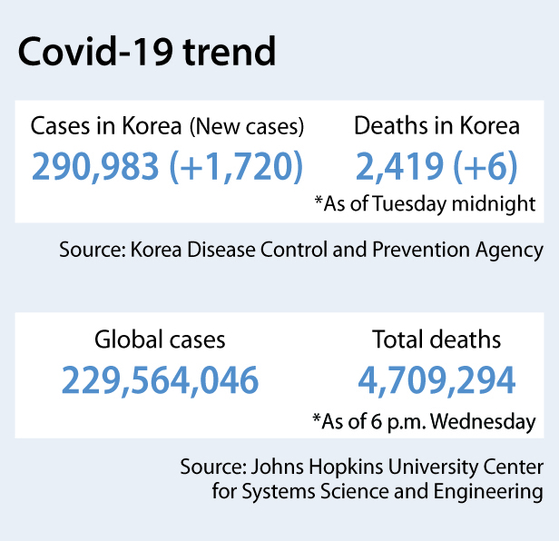 While mentioning the establishment of a Korea-Vietnam health and vaccine partnership, President Moon also requested Vietnam’s support and cooperation in phase 3 clinical trials of vaccines that Korean companies are preparing in Vietnam.