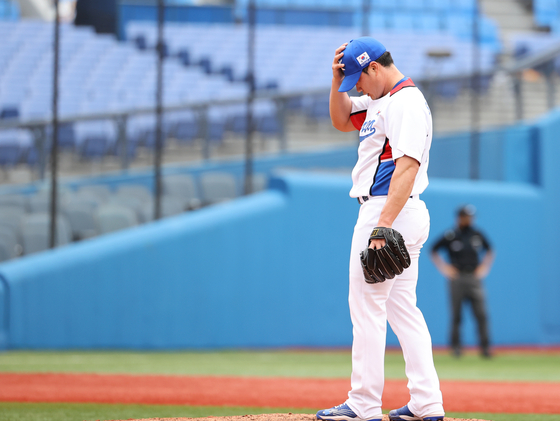 Korea's Oh Seung-hwan reacts as the Dominican Republic pull ahead in the eighth inning of the bronze medal match of the baseball tournament at the 2020 Tokyo Olympics. [YONHAP]


The Korean national baseball team leaves the 2020 Tokyo Olympics empty-handed, losing the bronze medal game to the Dominican Republic on Saturday after throwing away a late lead in the eighth inning.

Korea earlier lost the semifinal to the United States, losing the chance to defend its title as the reigning Olympic champion.

Korea gave up four runs in a terrible first inning that saw starting pitcher Kim Min-woo pulled after only one out.

The national team slowly fought their way back into the game, scoring one in the second and one in the fourth to take the score to 4-2.

The Dominican Republic added one more at the top of the fifth to take a 5-2 lead, but Korea bounced back at the bottom of the fifth, driving in four runs to pull ahead for the first time in the game, up 6-5.

That score held for the sixth and seventh innings, before the bronze medal attempt fell to pieces in the eighth.

Unexpectedly, it was veteran pitcher Oh Seung-hwan that was on the mound when everything went wrong.

Oh, statistically the best closer the KBO has ever produced and one of the three returnees from the 2008 Beijing Olympics team, came on at the top of the eighth, giving up a huge five runs before manager Kim Kyung-moon finally pulled him from the mound.

Nineteen-year-old Kim Jin-uk replaced Oh to shut down the inning, but the damage was already done. The Dominican Republic held a 10-6 lead and Korea had just two innings left to try and level the playing field.

Despite a few attempts at a rally, Korea was unable to get anything across and the Dominican Republic emerged victorious, claiming the bronze medal.

Korea arrived at the Olympics as the reigning champion, having taken gold at the 2008 Beijing Games, where the event was last contested. Despite hopes that Korea would be able to repeat that success in Tokyo, the national team appeared shaky from the start.

After a difficult first few games, Korea started to look more comfortable, progressing to the semifinals. The squad played in both semifinals, losing to Japan and the United States to shut the door on any hope of defending that gold.

The bronze medal game was the team's last chance at silverware, but unreliable pitching, so often the bane of the Korean squad, left the players with nothing to celebrate after nine innings.