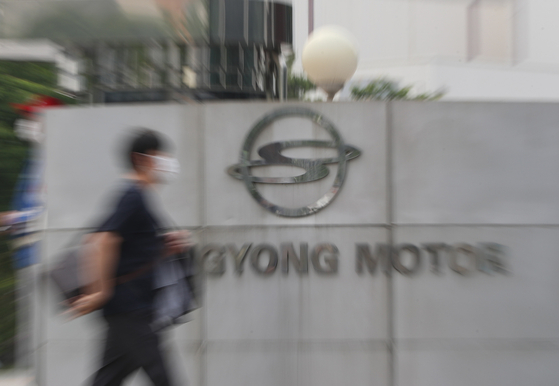 "Edison Motors is also planning to expand its EV business from trucks and buses to passenger cars as well," he said.

KCGI is an activist private equity fund based in Seoul that made a failed attempt last year to take control of Hanjin KAL, holding company of Korean Air Lines.

The two private equity funds will participate in the consortium as investors but won't help manage SsangYong Motor.

Edison was, in fact, one of the first companies to show an interest in SsangYong after it was placed under court receivership in April.

But whether Edison had enough money was a major question. It was estimated that about 1 trillion won was needed to buy SsangYong Motor.

SsangYong has been posting net losses every quarter since the fourth quarter of 2016. Its liabilities stood at 1.9 trillion won as of the end of last year.

"With the participation of Keystone Private Equity and KCGI as financial investors, a lot of the questions regarding how we are going to raise the money to buy SsangYong will be resolved," said Edison Motors CEO Kang on Monday.

"By establishing a special purpose company, we are going to raise 800 billion won to 1 trillion won to acquire SsangYong and we are planning to turn the company around in the next three to four years."

The consortium promised there will be no layoffs in the acquisition process.

"I don't plan on making profit by laying off workers," said Kang from Edison Motors.

SsangYong Motor's workers are sensitive to layoffs after some 2,600 of the company's employees were fired in 2009 in the aftermath of the Asian financial crisis.

A preferred bidder will be named in September and the acquisition process could be completed in November at the earliest.