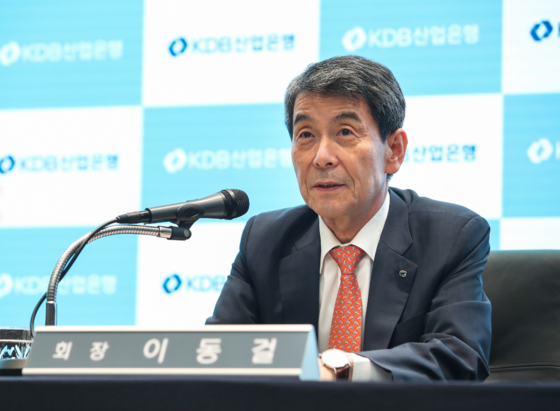 The Korea Development Bank (KDB), the main creditor of beleaguered SsangYong Motor, questioned whether its latest turnaround plan is good enough to attract a buyer.

The KDB admitted that buyers with any genuine intention to invest in the carmaker are “very rare" at the moment.

“It is true that the latest turnaround plan proposed by SsangYong Motor has progressed compared to before, but a turnaround plan without a detailed business plan is not sufficient for the KDB to decide whether we can provide financial support,” said Lee Dong-gull, chairman of the KDB, at an online press conference on Monday.

SsangYong Motor and its unionized workers agreed last week on a turnaround plan that included putting half its workers on unpaid leaves for up to two years starting next month.

Some 52 percent of the unionized workers agreed to the plan proposed by management.

SsangYong hoped to attract a new investor through the plan, but the KDB said it didn't think that will work.

“SsangYong has to see this issue from an investor's point of view,” Lee said. “Is it enough to persuade the investor to buy the company?”

Lee said the two-year unpaid leaves, which are the core of the plan, are not as appealing as the company thinks to a potential buyer.

“The investor would have to ask, 'Is it possible for SsangYong Motor to normalize its business within two years?' If the two-year unpaid leave period terminates, the labor costs will again go up, which will lead to insolvency again.”

SsangYong Motor was put under court receivership in April after failing to find a new buyer. It was the second time the company has undergone such a process since 2009.

SsangYong Motor has been posting net losses every quarter since the fourth quarter of 2016. Last year, it recorded 504.3 billion won in net losses. Its total liabilities stood at 1.9 trillion won as of the end of last year.

"It is regretful that SsangYong has to go through such hardship after a massive layoff back in 2009," Lee said.

"But what we need to think about is that the company's business has never normalized since."

SsangYong recently was approved of a consortium led by Ernst & Young to oversee the automaker's sale.