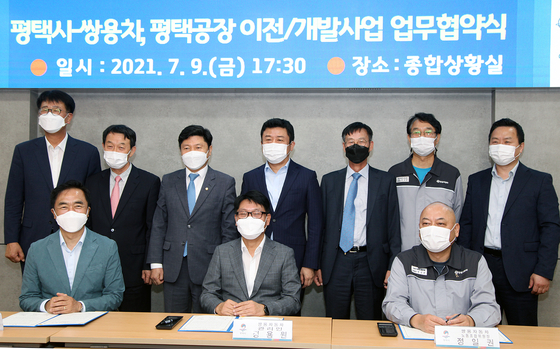 From left in the front row, Jung Jang-seon, mayor of Pyeongtaek, Chung Yong-won, court-appointed manager and Jung Il-kwon, chief of SsangYong Motor's labor union, pose for a photo at the memorandum of understanding signing at Pyeongtaek City Hall on July 9. [SSANGYONG MOTOR]

SsangYong Motor, the debt-laden automaker in court receivership, is selling its Pyeongtaek factory, its only facility for auto assembly.

The company has been making cars there for 42 years.

Both the land and the factory are being unloaded, according to an announcement Sunday by the troubled automaker and the city of Pyeongtaek, Gyeonggi.

SsangYong has an operation in Changwon, South Gyeongsang, but that facility is only used for the making of engines, powertrains and other components.

The company said that it will be building a new facility for the manufacturing of electric and self-driving cars at a new site in Pyeongtaek.

"Relocation of SsangYong Motor's Pyeongtaek plant and building a dedicated factory for eco-friendly vehicles is part of the carmaker's mid and long-term plan to boost competitiveness," Chung Yong-won, the court-appointed manager for SsangYong Motor, said in a release Sunday.

"Through cooperation with the city of Pyeongtaek, the carmaker will do its best to relocate the factory and proceed with a new business plan as soon as possible."

SsangYong Motor and its unionized workers signed a memorandum of understanding (MOU) with the city of Pyeongtaek on July 9 to sell off the existing plant and build a new one in the same city.

Pyeongtaek City will provide administrative support to sell and relocate the factory, including granting approval for the new site in a timely manner so the carmaker can continue making cars without interruption.

“The city will offer active support to SsangYong Motor so that it can grow into a global company that can contribute to local economy,” said Jung Jang-seon, mayor of Pyeongtaek.

SsangYong Motor's 850,000-square-meter Pyeongtaek factory was recently valued at 900 billion won ($786 million), and its sale is expected to provide funds for the carmaker in building the new factory.

With the automaker looking for a new owner, the move could enhance its attractiveness in the market. Lack of eco-friendly models and facilities to build them was a potential deal killer for potential buyers amid the global auto industry's fast transition to EVs.

With the new factory, SsangYong Motor is planning to have six eco-friendly models by 2026, including the electric version of the Korando SUV, which is scheduled to go on sale in Europe in October.