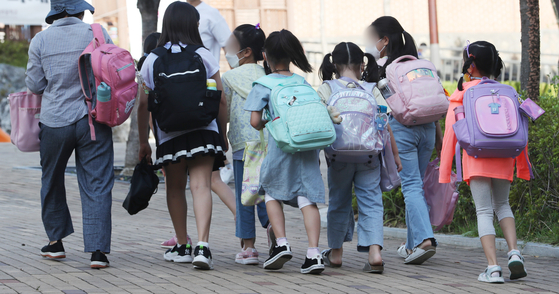 Students arrive at an elementary school in Seodaemun District, western Seoul on Monday, as more students were allowed to return to their classrooms. [NEWS1]


All kids went back to their classrooms in areas under Level 3 social distancing regulations — most parts of Korea outside the greater Seoul area — as Covid-19 restrictions in schools were eased Monday.

The Education Ministry said it was easing the restrictions in steps, after opening schools partially during the first two to three weeks of the second semester, which began in late August.

Despite Korea being in its worst wave of infections, the ministry has been stressing the need to get all students back into the classroom, saying the pandemic has widened inequities in learning. It also says schools are a relatively safe place for children to be, with statistics showing that schools were the least likely places for contracting of Covid-19.

Under the new guidelines, all students will attend classes in person in areas up to Level 3, or the second-highest level of the country’s four-tier distancing scheme, which is currently in force in most non-capital regions.

Greater Seoul — the city, Incheon and Gyeonggi — is under the highest Level 4 restrictions. Schools are allowed to offer in-person teaching with an attendance cap of one-half for third to sixth graders; two-thirds for middle schoolers; and 50 to 100 percent for 10th and 11th graders.

Kindergartens, first and second grades and special education classes will continue to be exempt from attendance limits, as well as high school seniors who have been fully vaccinated ahead of the College Scholastic Ability Test, or CSAT.

Despite the ministry’s attempts to get kids back to classrooms, all schools in Gwnagyang in South Jeolla — excluding high school seniors — were switched back to online classes on Monday as a cluster of infections broke out in a middle school in the city.

According to local health officials, a total of 21 students were infected with the coronavirus at the middle school as of Monday.

After one student tested positive on the previous day, the school conducted Covid-19 testing on all 581 of its faculty and students, and found 20 students to be newly infected.

The infection route of the first infected student is still unknown.

To prevent further virus spread within the community, all kindergarten to high school classes in Gwangyang had to switch to remote classes on Monday, except for high school seniors.

In addition, the local government ordered people in close contact with the Covid-19 patients, including family members, to be quarantined, and conducted emergency testing of their families, their siblings’ schools and local residents. 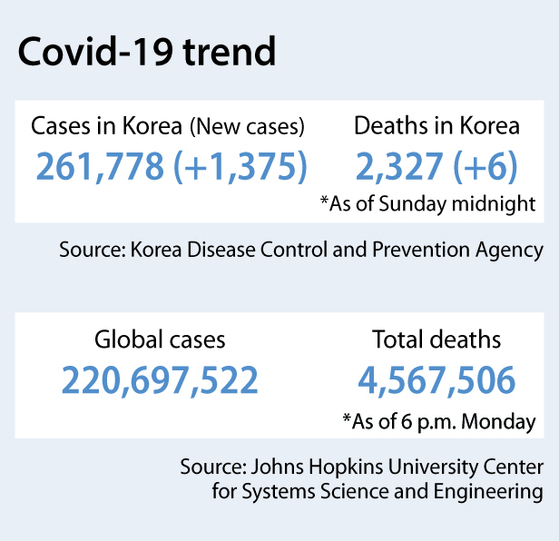 Korea saw 1,375 new Covid-19 cases over the past 24 hours, including including 1,351 local infections, the Korea Disease Control and Prevention Agency (KDCA) said Monday. The total caseload now stands at 261,778. 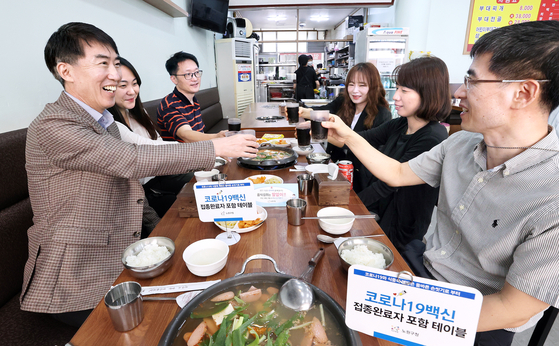 Six people have lunch together at a restaurant in Nowon District, northern Seoul, on Monday, when the country eased social distancing rules and allowed private gatherings of up to six people, including at least two fully vaccinated people before 6 p.m. and four after 6, in areas under Level 4. [YONHAP]


While the government earlier announced that it would gradually ease Covid-19 restrictions as early as October, they expressed concerns about excessive expectations for a “living with Covid” strategy.

Health authorities said they prefer not to use the term "with Covid" when referring to such plan, as it could be misconstrued to mean that social distancing would be ended and the number of Covid-19 cases were no longer important. Instead, they want to use the term “Step-by-step Recovery Plan to Normal Life.”

Such a cautious approach comes after the government announced a lighter social distancing plan, along with new vaccine incentives — such as exemption from mask mandates and participating in larger private gathering — in July, which eased Covid-19 health measures among some in Korea and led to the fourth wave of infections.

Starting Monday, Level 4 social distancing measures in the greater Seoul area and Level 3 in other parts will remain in force through Oct. 3.