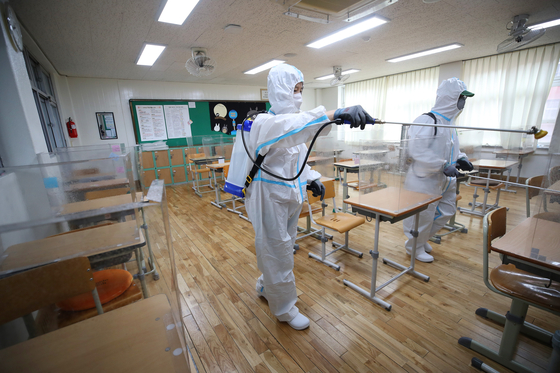 Sanitization workers disinfect a high school classroom in Daegu on Sunday afternoon ahead of the school reopening. [YONHAP]


Korea's new coronavirus infections hit a record high for a Monday amid concerns over some schools reopening on Tuesday. 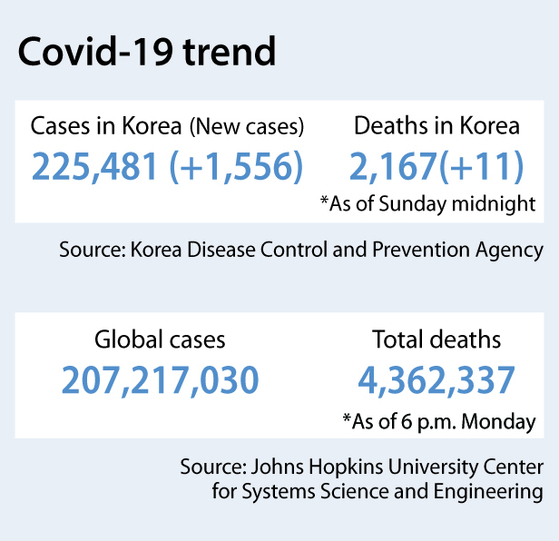 The country registered 1,556 new Covid-19 cases over the past 24 hours, including 1,493 local infections, raising the total caseload to 225,481, according to the Korea Disease Control and Prevention Agency (KDCA).

Of the new cases, 1,493 were locally transmitted and 63 came from overseas.

By region, the greater Seoul area accounted for 57.4 percent of the domestic total including 392 in Gyeonggi, 355 in Seoul and 110 in Incheon.

In Seoul, sporadic infections continued in the Noryangjin Fisheries Wholesale Market in Dongjak District and a church in Seocho District.

After one fish merchant first turned out to be coronavirus-positive on Aug. 3, infections spread to other merchants and their relatives, bringing the cluster's total to 62 as of Sunday.

Health authorities installed a Covid-19 screening center at the fish market on Monday, which will operate until Sunday to test workers.

A total of 64 infections were traced to a church in Seocho District that violated social distancing measures and held services.

There were also 24 confirmed cases at a logistics center in Songpa District, eastern Seoul.

Infections outside the capital region rose to 42.6 percent of the total, with 125 in Busan, 84 in South Gyeongsang, 75 in North Gyeongsang and 64 in Jeju.

Health authorities are striving to prevent spikes in coming weeks as people return to their workplace after the three-day Liberation Day holiday.

The government set up temporary testing centers at four major highway service areas in Gyeonggi — in Yongin, Icheon, Hwaseong and Anseong — so people coming back from vacations can stop by to get tested.

As of Sunday, a total of 5,097 people visited to take a test over the past three days and 11 of them turned out to be positive, the KDCA said.

The testing centers will operate until the end of this month.

Cumulative deaths are also going up along with the rapidly increasing Covid-19 patients.

Patients in critical condition — those who require high flow oxygen treatment, mechanical ventilation or being put on a respirator, extracorporeal membrane oxygenation (ECMO), or continuous renal replacement therapy (CRRT) — stood at 353 on Monday, staying in the 300s for 16 days in a row.

Korea kicked off its vaccination campaign in February hoping to minimize severe disease and deaths, but the latest figures show that the situation can get worse.

“We have confirmed that severely ill patients and deaths could rise following an overall increase in infections before the vaccination rate reaches a certain level of curbing the spread or attaining herd immunity,” Kwon Jun-wook, the deputy commissioner of the KDCA, said during a briefing on Monday.

“Nearly 90 percent of the people who are found to be in critical condition or dead are unvaccinated, [and the rest] haven’t formed antibodies or are breakthrough infections,” Kwon added, urging people to follow social distancing rules as well as getting the vaccines.

Amid concerns over the surge in infections, some schools are set to start opening in-person classes this week, starting Tuesday.

The number of students allowed back to school will be limited until Sept. 3.

Elementary schools in areas that are under Level 4 restrictions will allow all first and second graders back. Third to sixth graders will learn remotely. Middle schoolers will have an attendance cap of one-third, which means one grade will be in the classroom one week and two grades will learn remotely.

For schools in other regions under Level 3 through Sept. 3, all first and second graders will go to school, while three-fourths of third to sixth graders will be allowed.

Two-thirds of middle school students will go to school, and either one-half or all 10th and 11th graders will return.

After Sept. 3, all students will attend classes in person in Level 1, 2 and 3 areas.

In Level 4 areas, schools are allowed to offer in-person teaching, with an attendance cap set at one-half for third to sixth graders in elementary school, two-thirds for middle schoolers and one-half for high schoolers.