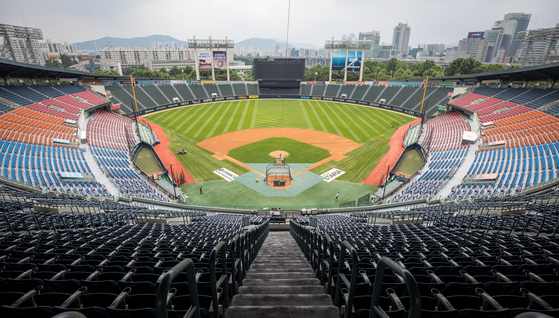 
The KBO returns Tuesday after a month-long break for the 2020 Tokyo Olympics.

The league ended on bad terms. The league was forced to start the Olympic break a week early after an outbreak that started with three NC Dinos fans began to spread to other teams.

The three infected NC players — Park Sok-min, Kwon Hui-dong and Lee Myung-ki — along with teammate Park Min-woo have since been suspended for the rest of the season after it was revealed that the Covid-19 cluster was triggered by a gathering they attended that broke social distancing rules.

Infections continued to spread around the league and other players were found to have broken, or at least ignored, social distancing rules.

The public image of Korean baseball wasn't helped much at the 2020 Tokyo Olympics either, where Korea not only failed to defend its title as reigning champion, but failed to medal at all, losing two semifinals and the bronze medal match. The perceived attitude of some players — already under fire for the Covid-19 outbreak — further angered fans.

Under that cloud, the KBO will attempt to pick up the pieces and resume the regular season on Tuesday.

The KT Wiz hold onto the top spot going into the second half of the season, holding a two-game lead over the LG Twins and Samsung Lions, in second and third place respectively. The SSG Landers and Dinos round off the top five, while the Kiwoom Heroes are in sixth with the Doosan Bears in unusual territory down in seventh. 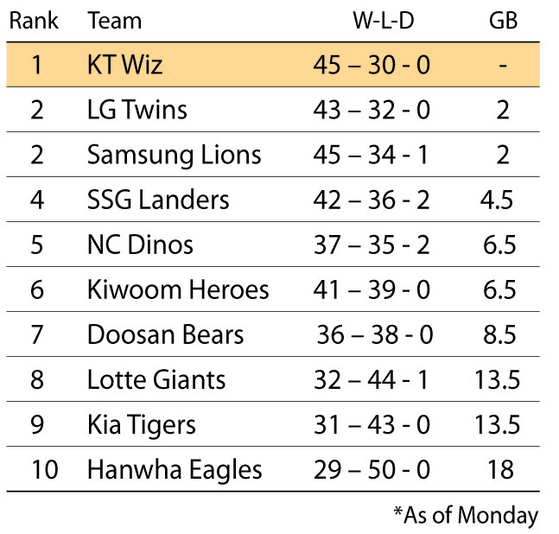 The Lotte Giants, Kia Tigers and Hanwha Eagles round off the table, with the Eagles trailing by four and a half games.

The Wiz's two-game lead is notable as it marks one of the first times this season that a team has really started to pull ahead. The league stayed unusually tight for the first two months, with the Dinos and Bears finally falling away from the other top teams in late June.

The Bears have continued to fall back while the Landers also dropped down to join the Dinos, leaving the Wiz, Twins and Lions at the top of the table by a reasonable margin.

The league returns Tuesday with a series of fixtures that pit some of the top ranked teams against each other. All games start at 6:30 p.m.

The Wiz travel to Jamsil in southern Seoul to take on the Twins, the Bears head to Daegu to face the Lions, the Giants and the Dinos face off in Changwon, the Eagles take on the Tigers in Gwangju, and the Wiz and Heroes play each other at Gocheok Sky Dome in western Seoul.