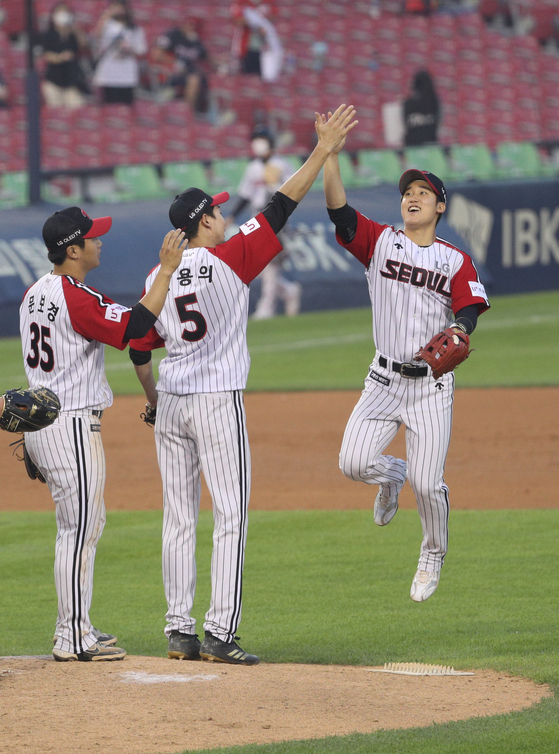 The LG Twins celebrate their 6-0 victory over the Kia Tigers at Jamsil Baseball Stadium in southern Seoul on Sunday. [NEWS1]


Breaking out the brooms is becoming increasingly important in the KBO, with the top teams packed so closely together that a sweep a week often decides who takes the top spot.

This week it was the LG Twins turn, winning all three games against the Kia Tigers to take a narrow lead in the league, with just two games separating the top four teams.

The Tigers headed to Jamsil in southern Seoul to take on the Twins, dropping all three games: 5-0, 7-2, 6-0. The sweep allowed the Twins to knock the KT Wiz off the top spot.

The Wiz played four against the Doosan Bears over the weekend with one postponed game added to the three-game series for a double header on Saturday.

The two teams split the series, with the Bears taking the first two games and the Wiz the last two. The two losses were enough to see the Wiz slip 1.5 games behind the Twins.

The SSG Landers are tied with the Wiz at second, having won their series two games to one against the Hanwha Eagles over the weekend. The Eagles took an early 4-3 win at home on Friday, before slipping over the weekend to allow the Landers to take the next two games: 7-5, 4-3.

The final team rounding off the top four is the Samsung Lions, who actually lost their weekend series against the ninth-place Lotte Giants. The Lions dropped the first game in Busan 7-4, before coming back to win the next game 9-1 and then taking a narrow 8-7 loss on Sunday.

The Twins, Wiz, Landers and Lions are separated by just two games at the top of the table, with the fifth-place NC Dinos and sixth-place Bears slipping further behind.

The four teams have been trading the top spot amongst themselves since the middle of April, when the Dinos started to tumble. The Wiz last held the top spot on June 17, the Landers on June 8 and the Lions on May 21.

The Dinos' fall from grace comes as a surprise — the Changwon club won both the pennant and the championship last season and, along with the Bears, has been one of the two teams to beat in the KBO in recent years.

This year's scorecard is looking a lot less decisive. The Dinos dropped their weekend series to the seventh-place Kiwoom Heroes at home, winning the opening game 5-0 before losing two in a row: 12-7, 8-4.

The Kiwoom Heroes are two games behind the Dinos and Bears, straddling the growing gap between the top six and final three teams: The Hanwha Eagles, Lotte Giants and Kia Tigers, who slipped to last place after dropping four in a row.

Starting Tuesday, the Twins will take on the Landers in Incheon, a potentially interesting matchup that pits two of the top teams against each other. Elsewhere in the league, the Heroes take on the Bears at Jamsil, the Dinos will head to Busan to take on the Giants, the Eagles face the Lions in Daegu, and the Tigers and the Wiz face off in Suwon.