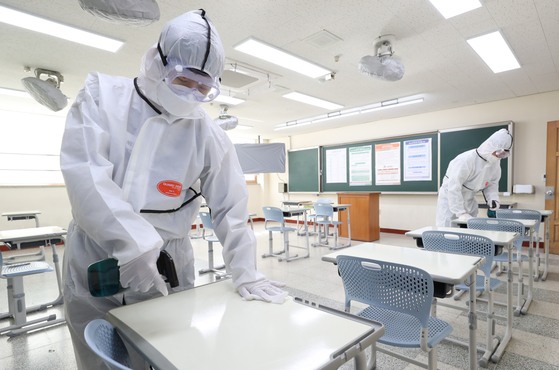 Quarantine workers disinfect a classroom for the state-administrated college entrance test in Dongtan High School in Hwaseong, Gyeonggi, on Tuesday, two days before the test will be taken by 509,821 students nationwide. [NEWS1]

According to the Korea Disease Control and Prevention Agency (KDCA), the number of Covid-19 patients in critical condition was 495 as of Monday midnight, up by 10 from the previous day. This is the largest figure Korea has reported since the start of the pandemic, breaking the previous record of last Saturday’s 485 critical cases.

Although it came close to the 500-case threshold that the government has warned about, authorities said the situation does not warrant an emergency plan to halt the “With Corona” policies and reintroduce stricter social distancing measures.

“The current situation is not so dangerous as to require drastic action,” Son Young-rae, senior epidemiological strategist at the Central Disaster Management Headquarters, told reporters on Tuesday.

“In countries overseas like in Europe, the return to normalcy triggered a large-scale virus wave, but [the outbreak] in Korea hasn’t grown large enough to be evaluated as a large-scale wave,” Son said.

Virus transmissions in Europe have picked up, as shown in the weekly epidemiological update on Covid-19 by the World Health Organization (WHO), which found that Europe accounted for 63 percent of 3.1 million newly diagnosed Covid patients reported around the world from Nov. 1 to 7.

In Korea, new cases centered on people aged 60 and older and in certain types of facilities, leading to an increase in critically ill patients, the government said.

“Cluster infections have been increasing in high-risk facilities such as nursing hospitals that were eligible for vaccination early this year,” Son said. “Currently we are putting efforts into reducing critically ill patients by swiftly giving booster shots, restricting visits to nursing hospitals and strengthening health measures of the employees.”

Along with the rise in severe cases, the intensive care unit (ICU) bed occupancy rate nationwide stood at 61.7 percent as of 5 p.m. Monday, with 695 out of 1,127 beds full.

In the greater Seoul area, where more than 75 percent of virus infections are being reported, the rate shot up to 76.1 percent, or 523 out of 687 intensive care beds occupied. By region, Seoul had 78.8 percent of its ICU beds full, followed by Gyeonggi with 73.8 percent and Incheon with 72.2 percent.

With the capacity of ICUs worsening in the capital region, the government on Tuesday called an emergency meeting of 22 directors of large general hospitals in the greater Seoul area to discuss ways to find additional sick beds.

On Tuesday, Korea reported 2,125 new Covid-19 cases, of which all but 15 were locally transmitted, raising the accumulated caseload to 399,591. Usually figures from early weekdays are lower due to fewer tests conducted on weekends, but they continued to stay above 2,000 for seven days in a row, and recorded the largest Tuesday figure in seven weeks, according to the agency.

Twenty-two more people died from the virus, bringing the death toll to 3,137.

Seeing increases in breakthrough infections and critical cases, the government is considering shortening the period between administering booster shots and the initial jab or jabs.

“As the immunity of the elderly is waning faster than expected, there were opinions that the booster shot interval should be reduced,” health official Son said.

Currently, the government recommends booster shots six months after the primary vaccine series, while employees and patients at nursing facilities and medical institutions can get boosters after five-months, and Janssen recipients and those with reduced immunity can get a booster from two months after their final jab.

“We believed the vaccine immunity effect will last until six months, but cases of those who caught the virus after four to five months have been increasing,” he said. Whether to push forward booster shots for all ages or only for the elderly is under discussion.

Korea is set to announce its final decision on the booster shot interval on Wednesday.

It will also announce new criteria to evaluate the virus situation, including specific guidelines on when to initiate a so-called circuit breaker, or reintroduce tighter social distancing measures.

That announcement was originally planned to be made last Tuesday but was postponed twice.

It is likely that the government will make its weekly virus risk assessment based on severe cases and deaths, rather than daily infection counts.

Despite efforts to speed up the distribution of boosters, Korea reported its first breakthrough infections after a booster inoculation on Tuesday.