ACC hopes to prove folk music is a universal language

ACC hopes to prove folk music is a universal language 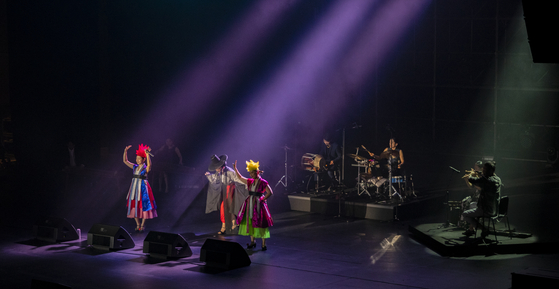 
It’s a universally shared idea that music transcends language, uniting people from different parts of the world. But the Asia Culture Center (ACC) in Gwangju has been hoping to go a step further, not just bringing people together, but allowing them to communicate as well.

Ranging from Korea’s gugak to fado from Portugal and tango from Argentina, the state-run culture center has been introducing various genres of music that originate from different parts of the world for more than a decade through its annual World Music Festival, "hoping to not only unite people through music but allow people to really communicate with the world through music."

Amid the coronavirus pandemic, the ACC said it will hold this year’s festival, which runs from Aug. 20 to 22, both online and offline.

One of the highlights of the festival, according to the ACC, is the unprecedented collaboration concerts by local artists that will be presented during the festival.

On Aug. 20, pansori singer Kim Jun-su, a true rock star of the pansori world, will collaborate with singer and songwriter Choi Go-eun, who has been more active in the European music scene.

On Aug. 22, bass player Seo Young-do will also collaborate on stage with Kim Yul-hee, a pansori singer who has been garnering attention for experimenting with combining pansori and new genres.

As none of the foreign artists will be able to visit Korea in person, the ACC decided to stream pre-recorded performances during the festival.

Mariza, a popular fado singer from Portugal, will introduce the less familiar genre of music to Koreans, as well as those who will be watching online from other parts of the world.

Taiwanese artist Sauljaljui, an indigenous musician who is part of the Paiwan Tribe, will present an online performance by collaborating with Korean gayageum (12-string zither) trio Hey String on Aug. 21.

According to the ACC, the online performances of the foreign artists that will be played during the festival are all newly produced videos for the ACC World Music Festival.

Another unique program for the upcoming festival is the “Telematic Concert,” in which performers from the U.S. and Korea exchange sound and video in real-time via the internet. The show can be enjoyed offline at the ACC or online at 3 p.m. on Aug. 20.

Other local artists performing at the festival include both popular music artists like Daybreak, SWJA, Jeong Mil-a, OBSG and Silica Gel, and traditional music singers like pansori masters Ahn Sook-sun and Kim Il-gu.

“Due to Covid-19, foreign musicians could not participate in person but other positive opportunities were created such as innovative collaboration projects between Korean musicians and performances produced by the ACC World Music Festival," said Huh Yoon-jeong, artistic director of the festival. "I hope that this festival will bring vitality to the lives of the people who have been exhausted by the prolonged Covid-19 situation.”

More information is available on the ACC website, www.acc.go.kr