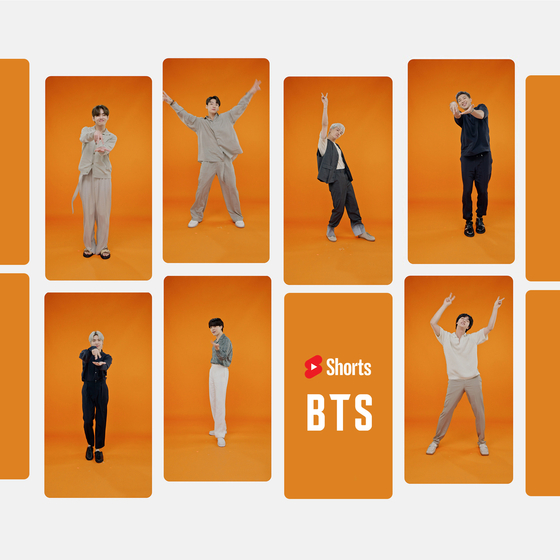 
BTS wasn’t kidding when it sang "we don’t need permission to dance."

After releasing its Billboard-topping single “Permission to Dance” in July, BTS invited the world to dance along to the song on YouTube Shorts, a feature similar to TikTok that lets users shoot 15-second videos using their mobile phones.

Called the “Permission to Dance Challenge,” the event kicked off on July 23 and ran through Aug. 14. The challenge was simple: Dance to the song by showing off the International Sign gestures that mean “joy,” “dance” and “peace.” Entrants were also in with a chance of having their videos featured in a compilation that will be released at a later date.

BTS had previously launched dance challenges for tracks “Life Goes On” (2020), “On” (2020) and band member J-Hope’s solo song “Chicken Noodle Soup” (2019) on TikTok. For the “Life Goes On” dance challenge, more than 463,000 videos were uploaded on the platform which garnered a total of over 2.2 billion views in just fifteen days.

These types of challenges, which are aimed at attracting social media users into the band's already-overflowing fanbase, can explain why BTS has won the Billboard Music Awards’ Top Social Artist category for five years straight since 2017. The category was first established in 2011 and is well-known as a “popularity award.”

But how did BTS, who once won only in fan-voted categories, come to conquer the American music industry and take home awards in categories like Top Duo/Group, Top Song Sales Artist and Top Selling Song? The answer lies in social media.

The Korean music industry continues to grow at a sharp rate. According to a 2020 survey on people's music preferences released by the Korea Creative Content Agency, people who listen to music through video platforms like YouTube increased from 46.8 percent in 2019 to 60.3 percent in 2020. Only 28.7 percent and 11.5 percent of respondents said that they listen to the radio or physical albums, respectively. As video platforms are here to stay, music has fused with social media content, expanding the music industry. 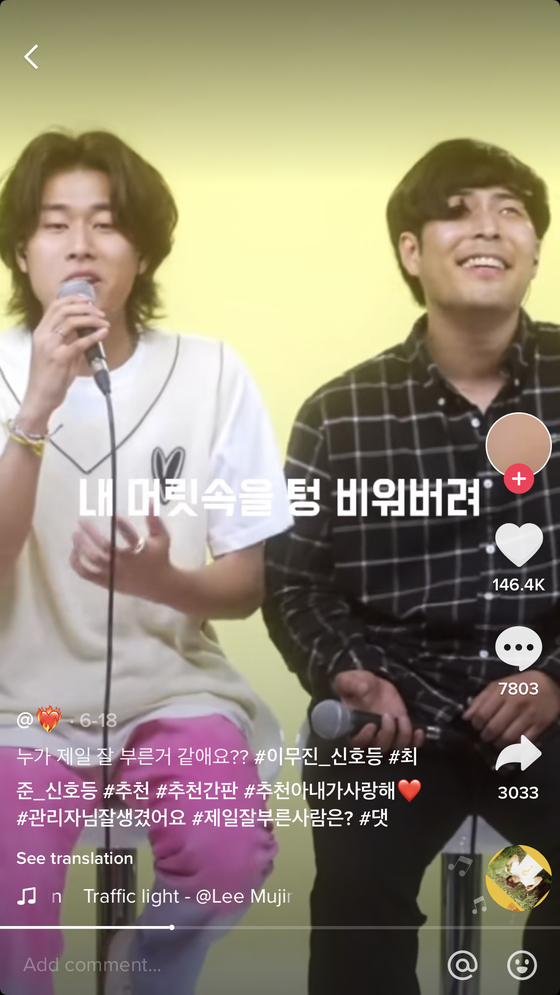 
Singer Lee Mu-jin’s hit song “Traffic Light” (2021) is an example of the huge role social media can play in making a song popular. The song disappeared from local music charts directly after its release in May, but returned in June after it was featured in a TikTok challenge. More than 36,000 videos appeared on the platform and the song shot up to No. 4 on the Gaon Chart, No. 3 on Melon and No. 2 on Genie Music.

Nowadays, K-pop artists are pre-releasing new music through social media. TikTok has over 600 million daily active users, which played a role in rapper Zico’s “Any Song” dance challenge becoming a viral hit in early 2020. Since then, other K-pop stars like Seventeen, Sunmi and Blackpink have also used the platform to promote new music. BTS teased 30 seconds of “On” 12 hours before its official release on streaming platforms in February 2020. 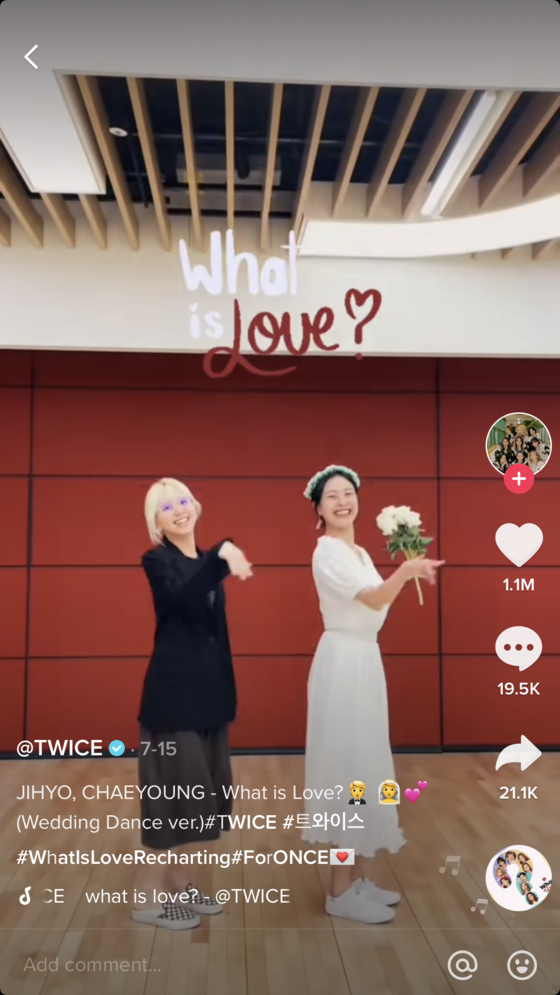 Twice recently started a TikTok dance challenge for its 2018 hit song ″What is Love.″ [SCREEN CAPTURE]


Hosting dance challenges can lead to a rise in music sales, since users will listen to the full version of music they hear on TikTok on streaming sites, influencing chart rankings.

One example is girl group Twice’s “What is Love,” released in 2018. The track has become even more popular on TikTok than the group’s most-recent hit “Alcohol-Free” (2021). According to K-pop Radar, a site that analyzes K-pop-related data, more than 140,000 clips of the “What is Love” dance challenge on TikTok accumulated 750 million views. The “What is Love” music video on YouTube saw about 890,000 views in one day on Aug. 27 thanks to the challenge while the music video for “Alcohol-Free” only gained 690,000, despite it being released in June. K-pop Radar analyzed this to be influenced by the TikTok challenge, saying “the fans’ active participation [in the challenge] has unintentionally resulted in heightened publicity.”

Promoting music through social media is based on “two-way communication.” While in the past the methods of radio play and album sales were unilateral, nowadays fans are able to participate in and share music content. Rapper D-Hack, who rose to No. 19 on the Gaon Digital Chart as of Aug. 17 with his song “Ohayo My Night,” became popular after TikTok user Hyeda uploaded a cover of the song in July. Almost 23,000 covers were subsequently uploaded. D-Hack thanked Hyeda by replying via a TikTok video with the duet feature.

“My song got more recognition recently thanks to TikTokers who covered my song, even though it was released last year,” said D-Hack. “I love every piece of content because they are unique in their own way. Social media gives anyone the opportunity to become a creator, because music is shared with one another without any bias.”

It isn’t just artists that benefit from social media. Social media has opened the door to people who aspire to be musicians. Singer-songwriter Stella Jang became known to the world after actor Jessica Alba uploaded a video last year of Jang’s “Colors” (2016). The track was then featured in over 1.3 million TikTok videos. 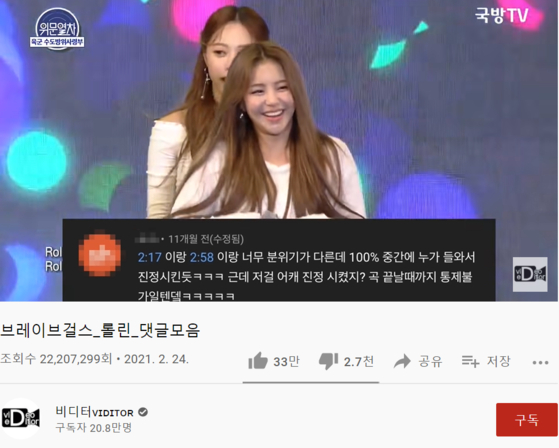 This YouTube video by Viditor, with over 22 million views, can be credited with making Brave Girls' ″Rollin'″ a nationwide hit. [SCREEN CAPTURE]


Among experts, social media is considered the driving force behind the growth of K-pop.

“K-pop has gotten much more influential with cover dances and addictive melodies being utilized on short-form video platforms,” said Choi Kwang-ho, Secretary General of the Korea Music Content Association. “These platforms have provided a new way for consumers to listen to music. Music isn’t just something you buy and listen to anymore — you can produce secondary content with it and enjoy music on a whole new level. This helps unknown musicians and their music to gain the recognition they were unable to get before. Social media is increasing the scale of the music industry by promoting diversity.”

As the boundary between creators and consumers has become blurred, the prior label-centered and agency-centered music industry has shifted to a consumer-centered strategy.

“Now the industry is unable to make content without communicating with the consumers during the process first,” said Choi. “Agencies and labels know that the key to success lies in consumers taking part in the process from beginning to end through various channels. This is why agencies are signing with platform businesses. This strategy of producing music content by communicating with the consumers will continue to be reinforced.”