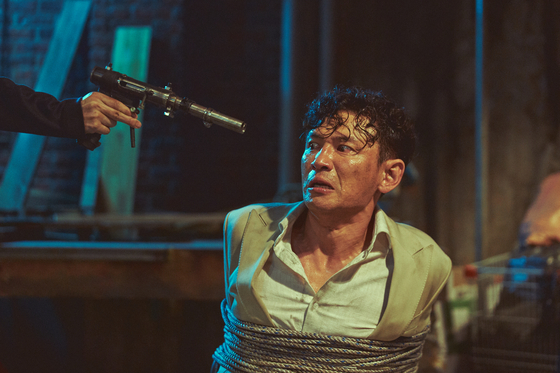 Actor Hwang Jung-min portrays himself as a movie star abducted in the streets of Seoul in "Hostage: Missing Celebrity." [NEXT ENTERTAINMENT WORLD]


A famous movie star is abducted on the streets of Seoul in the middle of the night.

To residents of Seoul or anyone who has lived in Korea, the premise sounds preposterous, but in director Pil Gam-sung’s debut feature film “Hostage: Missing Celebrity,” released in local theaters on Wednesday, he compactly crams how this star is kidnapped, and escapes the wrath of the five assailants using his wit, acting skills and the fighting techniques he picked up from action schools through the course of 92 minutes.

The film is a remake of a Chinese crime thriller “Saving Mr. Wu” (2015), which was based on a true story of which cast member Wu Ruofu was the victim. In the film, Ruofu portrays the police captain in charge of the abduction case.

In “Hostage,” Pil decides to ride the precariously thin line between reality and fiction by having actor Hwang Jung-min portray himself in the story. 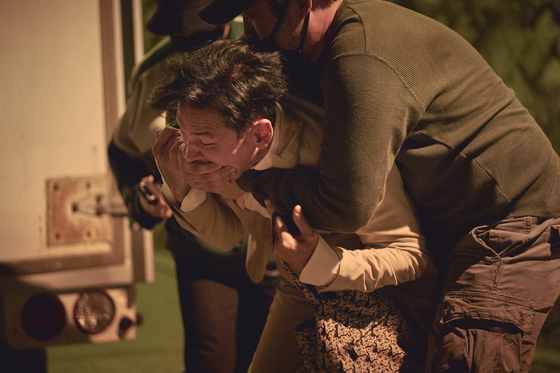 DIrector Pil Gam-sung wanted the kidnappers to be motivated solely by money. [NEXT ENTERTAINMENT WORLD]


“It was extremely difficult to portray myself as a victim of abduction because I’ve never been kidnapped before,” Hwang said after the press screening earlier this month. “I was totally oblivious about how I would have actually felt if I were to have actually been taken, so to act as myself in such situation was tricky. If it was a fictitious character, I could reshape him to feel whatever emotions he would feel, but since it’s me I’m portraying, it was very difficult figuring out whether my feelings were real or not.”

The director initially came across the story after watching a documentary about the actual abduction case which led him to see the film as well.

“I first saw the documentary about an actual event that took place in China. It was about an actor who was kidnapped but he managed to be rescued within a day,” Pil said in an online interview with the Korea JoongAng Daily on Thursday. “That tapped into my imagination and provoked my curiosity about what happened on that day, and how would an actor respond to this particular situation. Of course, there is only so much an actor could do if he was a victim, and he probably can’t cause a scene or say words that would provoke the kidnappers. But I think an actor still could use his acting to fool the kidnappers and escape.

“As I began to search for ideas to expand my story, I found out that it was already made into a film,” he continued. “But the focus of this Chinese film was different from what I wanted to do with my film. As the film title suggests, it was more about how the police save Mr. Wu, whereas I wanted to focus on the actor’s escape.”

Pil decided to cast an actor that played themselves to make a distinction from previous crime thrillers with similar plots. The film begins with prior interview clips that Hwang actually gave through media and award ceremonies, signaling to audiences that Hwang is actually playing himself. Throughout the film, numerous iconic lines said by Hwang which are still popular through memes and short video clips frequently pop up, such as those from films “Veteran” (2015) and “New World” (2013). 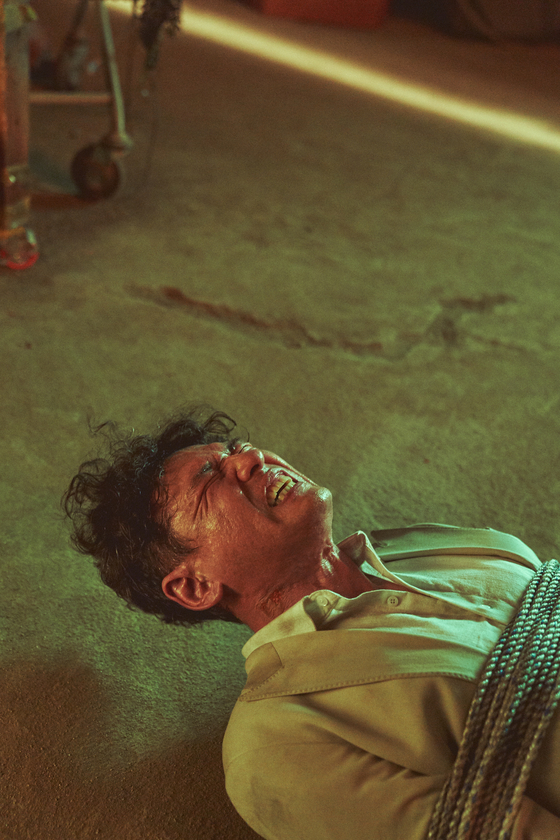 A scene from the film as Hwang attempts to escape from the kidnappers. [NEXT ENTERTAINMENT WORLD]


With the exception of Hwang, however, the rest of the actors who portray the police detectives, the kidnappers and all of the extras, were carefully handpicked. Casting directors made sure to choose either rookie actors or those unfamiliar to the masses to create a realistic element to the film.

“Having Hwang appear as himself was the catalyst for the decision to not cast any other well-known actors,” Pil said. “The audience might wonder, ‘hey, why is Hwang playing himself in the story but Cho Jin-woong isn’t?’ So one of our goals from the pre-production process was to find new faces — talented, but fresh.”

The leader of the crime ring Choi Ki-wan is portrayed by Kim. Although he may be unfamiliar to audiences on the silver screen, he’s a veteran stage actor who’s been active in numerous theaters and musicals since 2004. “Hostage” marks Kim's film debut and he beat out 1,000 other hopefuls to land the role.

“I was brimming with passion when I first heard that I had been cast,” Kim said during an online interview on Tuesday. “I was willing to show all I’ve got, but as I had more in-depth discussions with the director, I realized all the characters had a very distinctive role that they had to play, and what I needed to do was to strengthen my individuality as a character for all of us to stand out. I especially sought to differentiate myself from second-in-command, Yeom Dong-hoon. We were at the opposite ends of the spectrum on almost everything. If he’s like fire, I was ice. If he’s energetic, I was chillingly composed.” 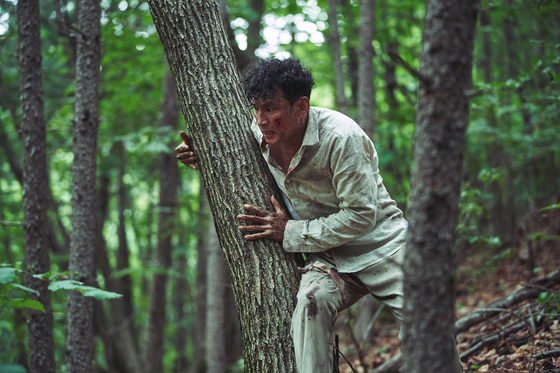 Hwang wanted his action scenes to portray a man desperate to survive. [NEXT ENTERTAINMENT WORLD]


In the film, the kidnappers'' only motivation to kidnap the actor is money. The plan is spontaneous, and the audience gets the feeling that they are making up what they're doing as they haphazardly attempt to get money from Hwang’s bank account.

“I wanted this group to be undefinable,” Pil said. “I didn’t want them to come off as merely thugs or criminals — they simply don’t fit together. Their combination was kind of like finding harmony within disharmony.

“And I didn’t give that much narrative behind the characters,” Pil added. “I thought that would only loosen the story’s pace. They just do it, without reason. I mean, there’s the basic motive of doing it for money, but from the perspective of a third person, it’s not that convincing. But I’ve done a lot of research — reading about victims’ interviews and asking questions to police who've dealt with abduction cases. There are actually a lot of scary events that take place without specific motivation. It’s totally random, which is what throws the police off course because they’re always looking for the ‘why.’” 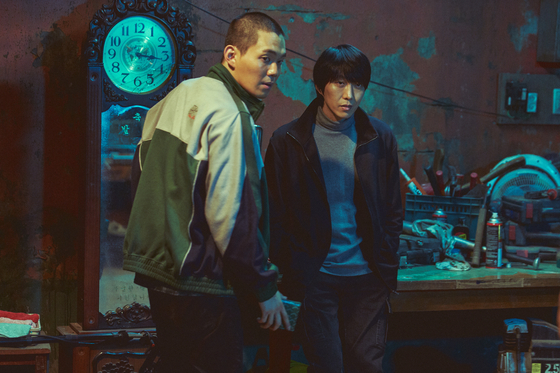 Right, Choi Ki-wan (played by Kim Jae-bum), the leader of the crime ring, and his second-in-command, Yeom Dong-hoon (played by Ryu Kyung-soo) in their safe house. [NEXT ENTERTAINMENT WORLD]


Hwang said that while he'd tried to envision how he would have acted if he was abducted, he thinks the current Hwang would have fought better than the Hwang in the film.

“I think I would have pulled off a better fight,” Hwang said ruefully. “But my priority was — and I talked about this with my martial arts director — that I wanted his actions and movements to come out of his desperation to break free. He’s a terrified victim who wants to live, and I wanted his movements to be uncoordinated.”

“It was all about balancing between my imagination and Hwang in real life,” Pil said. “Although the actor portrays himself, the Hwang in the film is the Hwang that I imagined. Hwang gave his own ideas and assumptions to give voice to the story, saying ‘this is what I would’ve done if I was in this situation.’ His input created synergy to give reality to the drama, but the actor never left the pretext of the story.” 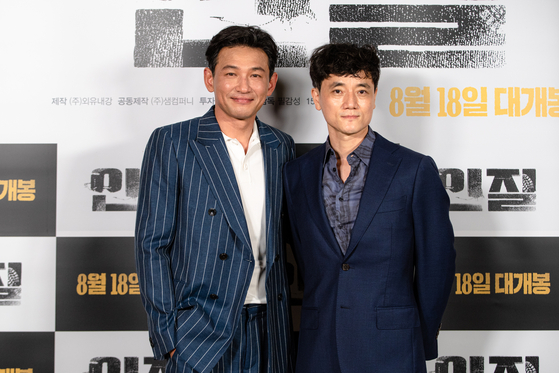 Hwang and director Pil pose for cameras after the press screening of their film earlier this month. [NEXT ENTERTAINMENT WORLD]


Perhaps the most surreal part of the story is the ending.

“I have given countless thoughts whether or not I could be like Hwang in the film,” Hwang said. “Would I be able to do what he did if I got abducted for real? [...] This is the conclusion director Pil and I reached together after thousands of discussions. I can confidently say that that’s what I would’ve done too. I can be as courageous as Hwang in the film.”