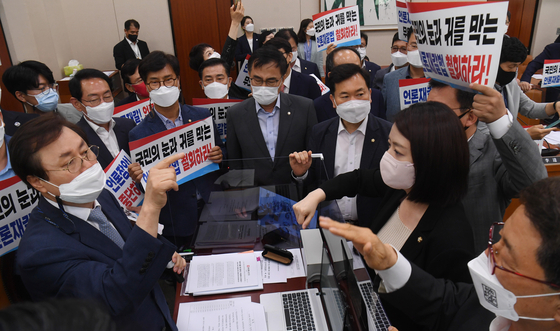 Opposition People Power Party lawmakers attempt to block the approval of an amendment to the Press Arbitration Act by Culture Committee Chairman Do Jong-hwan on Thursday. [YONHAP]


Ruling Democratic Party (DP) members on a parliamentary committee Thursday approved a bill that would impose a five-fold increase in penalties on media outlets that make false or fraudulent news reports, ignoring protests from opposition lawmakers and media associations.

The proposal – an amendment to the existing Press Arbitration Act – was passed at a plenary session of the National Assembly’s Culture, Sports and Tourism Committee by its DP lawmakers and after a boycott by protesting opposition lawmakers.

They attempted in vain to delay the bill’s passage by requesting it first go through an agenda coordination committee.

According to the National Assembly Act, when handling controversial bills, committee members should establish a coordination committee with equal numbers of members from ruling and opposition parties to narrow down the difference in opinion.

The opposition’s request was thwarted by the chairman of the culture committee, Do Jong-hwan, who nominated Kim Eui-kyeom, a member of the minor Open Democratic Party, as one of the six coordination committee members for the opposition.

Kim is outspoken in his support of the bill and is one of its original sponsors.

“While [the DP] has demolished proper legislative procedure and a fundamental pillar of the National Assembly to get the bill approved, this is the beginning [of the fight], not the end,” he said.

“This will become part of the DP’s shameful history in attempting to unconstitutionally weaken the media’s ability to criticize.”

The bill will now undergo a final review by the Legislation and Judiciary Committee ahead of a vote at a general meeting of the National Assembly.

The DP holds a majority of 60 percent of the 300 seats in the legislature, all but guaranteeing that it will become law.

The ruling party has pushed the bill doggedly in the name of reforming the country’s media against opposition from the PPP, whose members on the Culture Committee have boycotted its meetings, and media groups.

The revised Press Arbitration Act would increase legal liability for the release of “intentionally” or “grossly negligent” news reporting to up to five times the damages caused by the reporting.

Presidential candidate and Gyeonggi Governor Lee Jae-myung on Aug 2 called the five-fold increase in punitive penalties “insufficient,” saying that a media company “must be ruined if they intentionally and maliciously release fake news.”

The law would also mandate media outlets found culpable of violations to publish corrections or delete the erroneous information from their websites.

In response to criticism of what media groups and opposition lawmakers have called “toxic” clauses in the proposed bill, the DP revised it so that high-ranking government officials and executives of major companies cannot seek punitive damages.

Under the revised bill, disputed articles will also not be required to be marked with a notice saying they are under dispute, and damage claims against individual reporters will not be allowed.

Despite these revisions, the proposed law has come under heavy criticism from media groups, which in a joint statement called it an “unconstitutional press bill” whose “fundamental intent, which is to gag the press, has not been changed.”

Citing the World Association of Newspapers and News Publishers (WAN-IFRA) and the International Press Institute (IPI), a statement by the Korean News Editor’s Association, Korea Journalists Club, Seoul Foreign Correspondents’ Club and five other domestic media associations said, “In advanced countries, there is no such attempt to control the media by legislating a so-called “fake news” law. [WAN-IFRA and IPI] say the bill will infringe on press freedom. But the DP did not reflect on that criticism to any degree.”

The groups took additional issue with ambiguous language which replaced the damage estimation method prescribed in the original proposal, which now reads, “When estimating damages, social influence and total sales in the previous year of the media company will be taken into consideration.

The groups also decried the motive behind the DP’s push to pass the bill in the legislature.

“The biggest problem is that the bill regards the media as the source of ‘fake news.’ The ruling DP is defining the media as an enemy of the general public, instigating hatred of the media and trying to undermine its credibility,” they said.

Opposition lawmakers have referred to the law as a way for the DP to suppress or intimidate the media ahead of next year’s presidential election.

“The DP is running this country like a totalitarian state,” said Lee Dal-gon, a PPP member of the Culture Committee, during a meeting with reporters after the bill’s approval. “The PPP is seriously concerned that the DP will abuse this law in the lead-up to the election to break the media’s pen.”