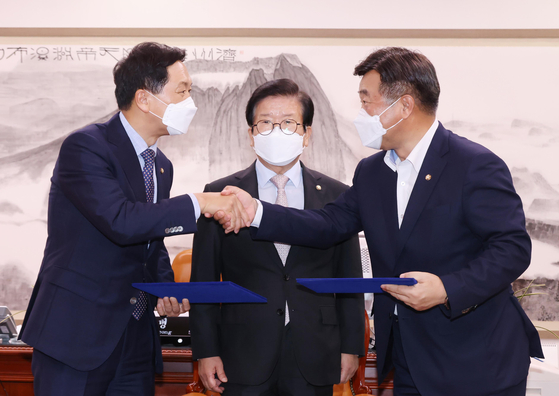 
The ruling Democratic Party (DP) and main opposition People Power Party (PPP) agreed Tuesday to create an eight-member consultative body of lawmakers and media experts to review the controversial media bill, which failed to be voted on Monday and Tuesday.

The parties, which have been at loggerheads since the bill’s introduction in the parliamentary Culture, Sports and Tourism Committee, also agreed to delay the introduction of the bill – which would impose a five-fold increase in penalties on media outlets that publish fake or fabricated reports – to a Sept. 27 National Assembly plenary session.

Parliamentary floor leaders Yun Ho-jung of the DP and Kim Gi-hyeon of the PPP reached the agreement at a Tuesday morning meeting convened by National Assembly Speaker Park Byeong-seug after talks all day Monday failed to produce an accord.

The PPP threatened to filibuster the bill’s passage into law after it was approved by the Legislation and Judiciary Committee last Thursday.

According to the floor leaders’ agreement, the eight-member consultative body will be composed of two lawmakers from the DP and two from the PPP, and each party will recommend two media experts. The body will examine the DP’s proposed amendment to the Press Arbitration Act.

The agreement marked a new twist for the controversial bill.

Before Tuesday, the DP had used its majority on both the Culture, Sports and Tourism Committee, where the bill originated, and the Legislation and Judiciary Committee, which acts as a gatekeeper for bills to be presented for a full parliamentary vote, to push the bill to the National Assembly floor, where it controls an absolute 60 percent majority in the 300-seat legislature.

However, the bill’s approval by the judiciary committee past midnight on Aug. 25 meant it could not be submitted for a full parliamentary vote that same day due to parliamentary regulations which precludes bills from being voted upon if they have passed committee review less than 24 hours before.

The legislature called its 390th extraordinary plenary session to vote on this bill. After initially being scheduled for Aug. 25, it was delayed to Monday, and then again to Tuesday due to the parties' conflict over the bill. Tuesday’s plenary session was held without the bill being introduced.

Opposition to the bill came not just from the PPP but also from minor parties such as the progressive Justice Party, civic groups and media industry associations.

The bill attracted harsh criticism from both domestic and international media organizations, including the Journalists Association of Korea, Seoul Foreign Correspondents' Club (SFCC), the World Association of Newspapers and News Publishers (WAN-IFRA) and Reporters Without Borders (RSF), all of whom have expressed concerns over the bill’s effect on freedom of expression.

President Moon Jae-in broke his silence on the bill on Tuesday with comments welcoming the parties’ decision to review the bill.

“Freedom of the press is a pillar of democracy and should be protected along with the people’s right to know. Therefore, relevant laws or systems should be closely reviewed to prevent any possible abuse,” said Moon, according to Blue House spokeswoman Park Kyung-mee.

However, the president appeared to double down on the need for the bill, echoing the ruling party’s arguments that “fake news” is a serious problem in Korea.

"On the other hand, the protection of victims of malicious false reports or fake news is also important. Special efforts by the media to rectify the situation are also needed.”