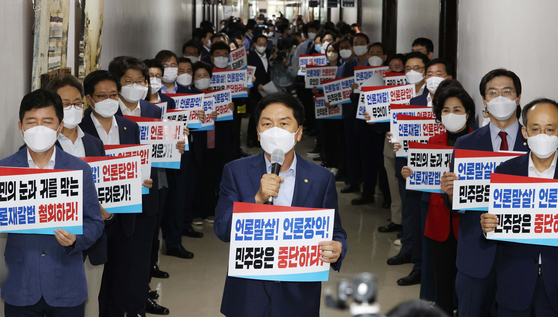 Kim Gi-hyeon, President of the People Power Party, leads a protest against the Press Arbitration Act outside the Legislation and Judiciary Committee's meeting room in the National Assembly on Tuesday. [NEWS1]


Media associations and the main opposition People Power Party (PPP) launched a final push Tuesday to stop the Democratic Party (DP) majority in the National Assembly from passing a law that would impose a five-fold increase in penalties on media outlets that make false or fraudulent news reports.

The Korean News Editor’s Association, Korea Journalists Club, Seoul Foreign Correspondents’ Club and five other domestic media associations submitted a petition to both the legislature and the Blue House on Tuesday, calling on them to reverse course on the proposed amendment to the Press Arbitration Act.

The revised Press Arbitration Act would increase legal liability for the release of “intentionally” or “grossly negligent” news reporting to up to five times the damages caused by the reporting.

The petition was begun on Aug. 9, after the media groups adopted a joint resolution calling for the bill to be scrapped while it was pending in the parliament's Culture, Sports and Tourism Committee. It accumulated 2,636 signatures from broadcasters, journalists, editors and others who work in the media industry.

Representatives from the seven domestic media associations that spearheaded the industry’s opposition to the law submitted the petition to the Blue House, National Assembly Speaker Park Byeong-seug as well as the chairmen of the PPP, DP and the Justice Party.

The representatives demanded that the National Assembly halt its consideration of the bill and return it to committee for further deliberation.

Meanwhile, the Korea Broadcast Journalist Association, National Union of Media Workers, Journalists Association of Korea and Korean Producers and Directors Association began a one-person serial protest in front of the National Assembly at 3 p.m. on Thursday, vowing to continue it until the conclusion of the legislature’s plenary session on Wednesday.

The bill is due for a vote by the National Assembly on Wednesday. It will almost certainly be approved considering the DP's super-majority of 60 percent of the 300 seats in the legislature.

Speaking first in the serial rally, Yoon Chang-hyun, chairman of the media workers’ union, lambasted the DP for characterizing the bill as a necessary tool against fraudulent news reports.

“The DP claims that [the bill] is a ‘law for claiming damages caused by fake news,’ but the standard of whether a report is ‘fake news’ varies depending on the stance of the reader,” Yoon said.

“If the bill, which aims to prevent damages from fake news, is not formed by social consensus, it will be recklessly abused to block unpleasant and uncomfortable criticism.”

Yoon also argued, “While the DP claims the bill will protect private citizens from damages caused by erroneous news reports, one cannot help but doubt who the victims are [in the DP’s eyes] and their political intentions.”

Yoon added that the bill still contains “clauses that can be ambiguous and interpreted arbitrarily,” despite revisions that excluded high-ranking government officials and executives of major companies from being able to seek punitive damages.

“Candidates in the Democratic Party's primary election now label unfavorable news reports as ‘fake news,’ but this can change depending on how they see it," Yoon continued.

“There has never been a case of a law that restricts freedom of expression among democracies in the world, and Korea will soon be the only country in the world,” Yoon warned. “If the DP hastily deals with important laws that change the direction of our democracy, the role and function of the media will be paralyzed.”