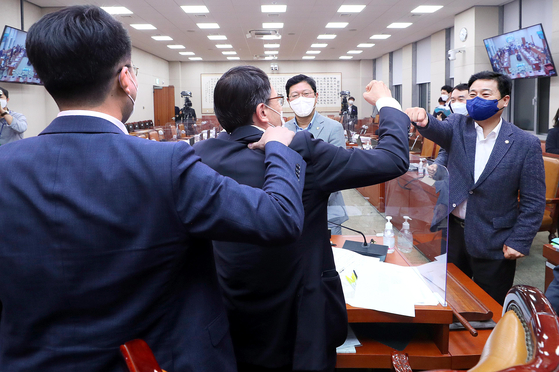 From left: Democratic Party lawmakers Kim Nam-kuk, Park Ju-min, Kim Seung-won and Kim Young-bae congratulate each other in the early hours of Wednesday after approving a controversial media bill at a Judiciary and Legislation Committee meeting at the National Assembly presided over by Park. [KIM KYUNG-ROK]


A National Assembly vote on the draconian media law being pushed by the ruling Democratic Party (DP) was delayed due to the bill's late approval by a parliamentary review committee early Wednesday morning.

The bill, which would amend the Press Arbitration Act by imposing a five-fold increase in penalties on media outlets that release false news reports, was approved by the National Assembly’s Judiciary and Legislation Committee past midnight after deliberations on Tuesday.

The judiciary committee reviews bills to check their wording and to ensure that they establish a consistent legislative framework.

The review process is intended to verify that the enactment or amendment of an act are in conformity with the legal system and purposes of lawmaking, and that it does not clash with existing laws.

Due to a walkout by five opposition People Power Party (PPP) members on the judiciary committee, the bill was unilaterally passed through the committee by the DP.

The boycott was triggered after committee Chairman Park Ju-min declared a change in the order of business as deliberations dragged on for hours after the meeting began on Tuesday afternoon.

“Continuing to discuss this bill only serves to help rush it through this committee, and it is impossible for us to further participate,” said PPP committee member Yoon Han-hong as the five members stormed out of the committee meeting at 1 a.m. on Wednesday.

In the opposition’s absence, the remaining members of the committee deliberated the bill from 2:20 a.m. for approximately an hour and 40 minutes, mainly lowering the standard for determining if “intentional” or “serious” damages resulted from an erroneous news report.

One of the conditions for levying increased penalties on a media outlet for a false report was if “damages were inflicted by repeated or vengeful reporting that is false or fabricated.”

At the suggestion of DP lawmaker and committee member So Byung-chul, who said that the clause could be interpreted to rule out penalties if damages could not be proven, the wording was changed so that penalties could be levied “in the case of repeated or vengeful reporting that is false or fabricated.”

As a result of the late committee approval, a plenary session of the National Assembly that was expected to pass it into law on Wednesday has been delayed to Monday.

Although the DP intended to vote on the bill on Wednesday’s original plenary session at 2 p.m., the PPP protested that the bill could not be submitted for a floor vote that same day, citing article 93 of the National Assembly Act, which forbids a parliamentary vote on a bill less than 24 hours after it has passed legislative review.

As a result of the delay, National Assembly Speaker Park Byeong-seug summoned the floor leaders of the major parties to set up another plenary parliamentary session to pass the bill.

Although the DP argued that an agreement was not necessary to proceed with a plenary meeting, the speaker reportedly told the floor leaders to follow the National Assembly Act.

The floor leaders agreed to delay the plenary session to 4 p.m. on Monday, Aug. 30, one day before the current 390th extraordinary session of the National Assembly expires.

While DP floor leader Yun Ho-jung expressed confidence that the bill would be passed on Aug. 30, PPP floor leader Kim Gi-hyeon said his party would “seek out every method to block the passage of the media law.”