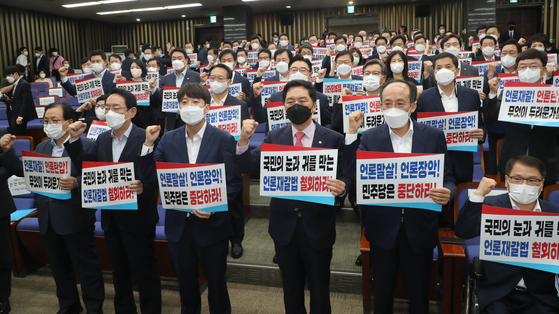 
Ruling and opposition party floor leaders in the National Assembly were unable to reach agreement as of Monday evening on a vote on a draconian media bill and started another round of negotiations at 7.p.m., leaving the bill's fate uncertain on the last day of the National Assembly's current legislative session.

While the ruling Democratic Party (DP), which holds a parliamentary majority of 60 percent in the 300-seat legislature, planned to pass a controversial amendment to the Press Arbitration Act at a plenary session scheduled for 5 p.m., the opposition People Power Party (PPP) has threatened to filibuster the bill since Thursday.

The floor leaders of the DP and PPP met ahead of the plenary session, but failed to reach agreement on procedures for a vote.

Supported by a broad coalition of domestic media associations who oppose the bill, the PPP has made clear its intent to employ all parliamentary procedural methods to stymie the bill's passage.

The bill would impose a harsh five-fold increase in penalties on media outlets that release false or fraudulent news reports, leading to accusations from the media industry that the law is intended to suppress criticism of the ruling party ahead of next year's presidential election.

The ruling party argues that because the bill – if passed – would not take effect until April 2022, it would not affect media coverage of the election.

Continuing their protests against the bill, the Korea Broadcast Journalist Association, National Union of Media Workers, Korea Broadcasting Engineers and Technicians Association, Journalists Association of Korea and Korean Producers and Directors Association released a joint statement in front of the National Assembly on Monday, urging the bill be scrapped and that “only a vote against [the bill] represented a true start to media reform.”

In the statement, the groups demanded that the ruling party and government “reach a consensus with civic society and current media workers,” calling such an effort “the DP’s last chance to exercise its legislative power in a democratic manner.

“If they reject even this proposal, the government will go down in history as having come to power through democratic means -- and passing a most un-democratic law.”

Meanwhile, the government and ruling party have delivered different answers about the applicability of the new law to foreign news organizations.

Responding to a request for clarification from the Seoul Foreign Correspondents' Club (SFCC), the Culture Ministry said Thursday that the Press Arbitration Act will not apply to international media outlets.

The SFCC board filed the request last week, adding the group’s opinion that the bill could seriously restrict the freedom of the press.

However, ruling party officials at a Monday press conference at the National Assembly said that “registered foreign media outlets” would be subject to the law, adding to confusion.

“If they are a registered media outlet in Korea, even foreign media are subject to the Press Arbitration Act,” said DP lawmaker Kim Yong-min, who chairs the party’s special committee for media reform. “However, in the case where an unregistered foreign correspondent has been posted to Korea, the law will not apply.”

Kim claimed there was “no confusion” about the law’s applicability to foreign media, and that the Culture Ministry had merely “given a different explanation” to the SFCC.