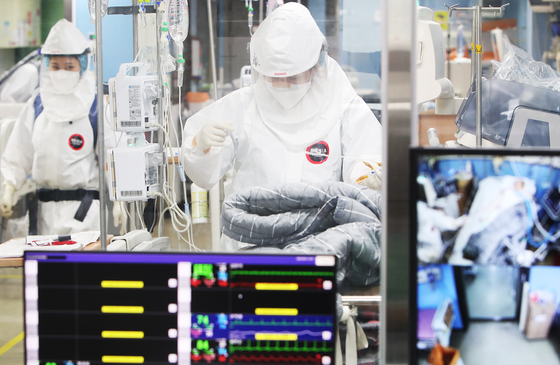 Medical staff at Bagae Hospital, a Covid-19 designated hospital in Pyeongtaek, Gyeonggi, treat Covid-19 patients while in their protective gear on Thursday. [YONHAP]

According to the Korea Disease Control and Prevention Agency (KDCA), a total of 1,379 foreign residents living in Korea tested positive over the past week — from Aug. 8 to 14 — taking up 11.1 percent of the week's total new infections.

This is disproportionally larger than the number of foreigners living in the country, which comes to 3.8 percent of the total registered population, authorities said.

The portion of foreigners getting infected has been steadily rising over the past eight weeks, up 7.6 times in number from 180 infected foreign residents, or 5.8 percent of that week's total infected, eight weeks ago.

Of last week's total, 959 cases were from the Seoul metropolitan area, accounting for 69.5 percent of the total.

By nationality, most of the foreigners who tested positive were from Asian countries, including Vietnam, China, Uzbekistan and Thailand —mostly in their 20s and 30s.

The number of clusters linked to foreign residents also sharply increased from just two in June to 42 in July and 22 in August, the KDCA said.

Covid-19 clusters tied to workers have been continuing all across the country, with a recent virus outbreak of foreign workers at a manufacturing company in Bukpyeong National Industrial Complex in Donghae, Gangwon, rising to 31 patients in total as of Thursday.

In response, some local governments issued an administrative order that everyone in businesses with foreign workers get tested for Covid-19, and also included foreign workers in the vaccine priority group.

“Some foreigners may be more vulnerable to the coronavirus than Koreans, as they may not be aware of distancing rules or may be in closed and crowded environments for a long time such as in small businesses or poor living conditions,” Bae Kyung-taek, the general situation team director of the Central Disease Control Headquarters, said during a briefing on Thursday.

Foreign migrant workers in blue-collar sectors such as agriculture, fishing, manufacturing and construction are often required to work long hours for as much as six days a week, making it difficult for them to visit a vaccination center, which usually only open on weekdays.

They may also face more difficulties when trying to book a vaccine online, as Korea’s vaccine reservation website is only provided in Korean. Similar difficulties are encountered when going through the mandatory self-verification process, which requires a cellphone that is registered under the same name.

Illegal immigrants, on the other hand, are often reluctant to sign up for a vaccine or get a Covid-19 test due to concerns over identity exposure and any possible crackdown.

The government vowed to establish a system to support vaccinations for foreigners, including establishing customized distancing rules and expanding pre-emptive Covid-19 testing. 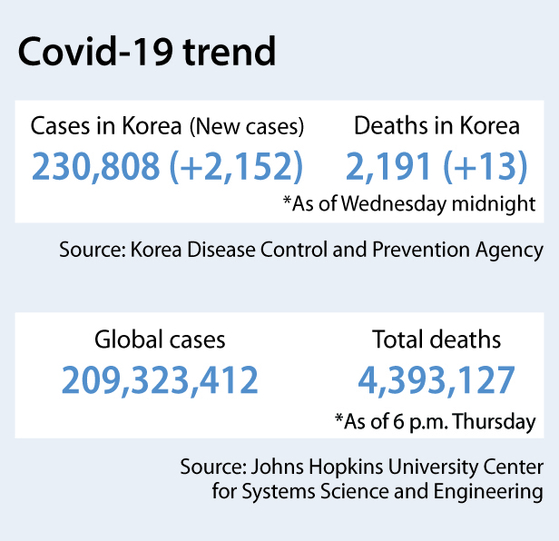 This is the second time daily cases surpassed 2,000 since the outbreak of the pandemic in the country, after the daily tally topped 2,200 last week.

Of the new cases, 2,114 were locally transmitted and 38 came from overseas.

By region, the greater Seoul area took 64.5 percent of the day's domestic total with 1,364 cases, while infections outside the capital region accounted for the remaining 35.5 percent with 750 new patients.

“New infections had been on the rise in the greater Seoul area, then emerged outside the capital region in line with the holiday season, and they are now increasing again in the Seoul metropolitan area as people return from vacations,” Sohn Young-rae, a senior epidemiological strategist at the government’s Central Disaster Management Headquarters, told reporters on Thursday.

Regarding the more transmissible Delta variant, which accounted for 85.3 percent of new infections over the past week, Sohn said, “We are having trouble curbing the virus spread as the [Delta] variant became a completely dominant strain.”

Covid-19 fatalities are also increasing along with the prolonged fourth wave of the pandemic.

There were 13 more deaths, the highest daily figure since the start of the fourth wave of the pandemic, bringing the death toll to 2,191.

“Fatalities tend to increase three weeks after an increase of the absolute number of confirmed patients […] and the number of deaths is now gradually on the rise following an increase in patients,” Sohn said.

Health authorities said they are focusing on preventing the spread among the elderly, especially the unvaccinated who are at high risk of developing severe symptoms or dying.

“The number of deaths will inevitably rise if the number of senior patients increases,” Sohn said.

“We are trying to minimize infections among the elderly by banning visits to nursing hospitals and nursing facilities,” he added.

While the current level of social distancing is scheduled to end Sunday, new distancing rules will be announced on Friday, and are likely to be extended.