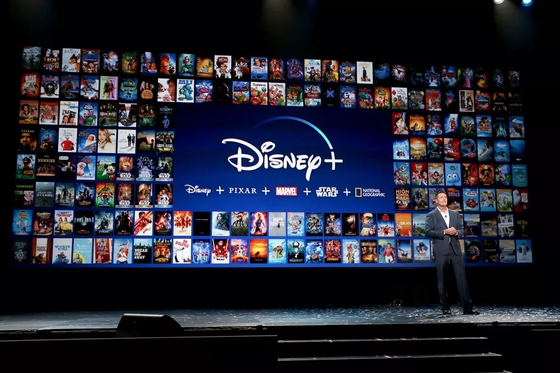 On April 11, 2019, The Walt Disney Company presented an extensive overview of its comprehensive direct-to-consumer strategy, including presentations on Hulu, Hotstar, ESPN+, and the upcoming Disney+ service at its highly-anticipated Investor Day, which took place on the Company’s studio lot. [WALT DISNEY]


Disney Plus will be available in Korea in November, presenting a challenge to both Netflix and the fragmented local market.

The arrival of the Mouse House's streaming service has been much talked about for some time, but this is the first time Walt Disney has committed to a specific month for the rollout.

CEO Bob Chapek said on Aug. 13 that it will be available in eight more markets including Korea, adding to the list of 61 countries where Disney Plus is already streaming.

The company is in talks with LG U+ to be carried on its IPTV service. According to local press reports, it may also be in discussions with KT.

If Disney Plus partners up with LG U+, users of LG U+'s IPTV will be able to watch Disney Plus on television without having to pay monthly subscriptions for the Disney service. LG U+ could benefit from the arrangement in terms of subscriber numbers. It signed an exclusive partnership in 2018 with Netflix, and its IPTV subscription rose by 20 percent within two years.

But for other over-the-top (OTT) video services, Disney Plus may spell disaster. Competition between local services is already quite fierce, and they are struggling to scale their businesses due to limited financial resources and lack of original programming. 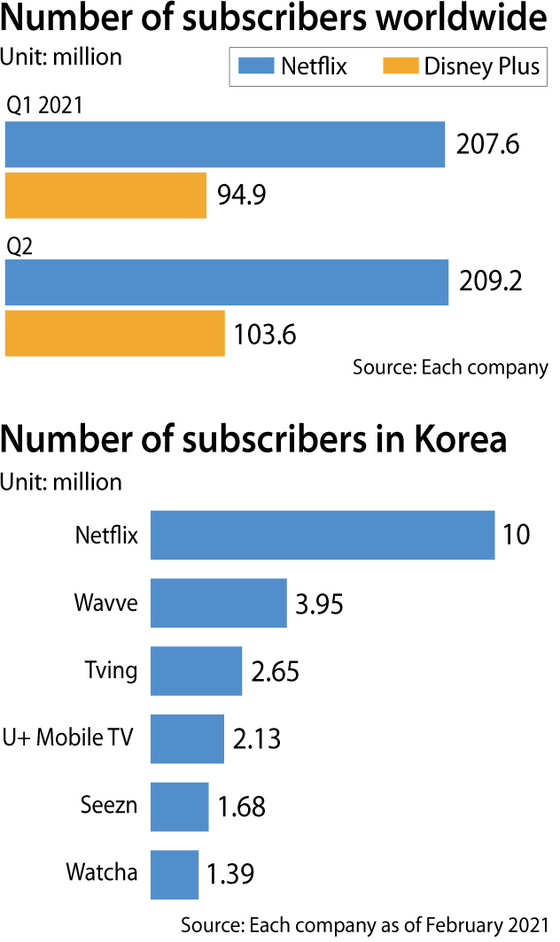 According to a report by Mobile Index, the number of monthly active users of Netflix was 10 million as of February this year in Korea, the highest among any OTT services. That was 2.5 times Wavve's, which had 3.95 million, and more than triple the number for Tving's, which had 2.65 million. U+ Mobile TV followed with 2.13 million, Seezn with 1.68 million and Watcha with 1.39 million.

Netflix may also have some worrying to do. Its subscriber growth has slowed, and Disney Plus is very competitive in terms of pricing and offerings.

A monthly membership costs $13.99 for Netflix and $7.99 for Disney Plus, which gives Disney Plus the upper hand in price competition but also a disadvantage in generating revenue.

The two differ in target audiences and production strategies, but it could still lead to a subscriber exodus for Netflix, experts say. Disney Plus mainly targets families with children, while Netflix goes for older audiences. Disney Plus also relies on its own original content, while Netflix relies heavily on original locally-produced content.

"People overly flocked to Netflix when it first came to Korea, because back then, local OTT services weren't as competitive as they are now," said pop culture critic Jeong Deok-hyun. "Local OTTs are growing, and Disney Plus could increase the size of the pie as a whole for the market. If Disney Plus manages to produce something for older audiences as well, then it's possible that Netflix users will move along to a new platform." 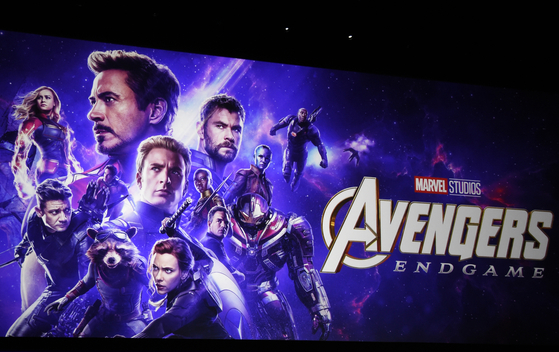 Artwork for the Marvel film ″Avengers: Endgame″ appears on stage during the Walt Disney Studios Motion Pictures presentation at CinemaCon, the official convention of the National Association of Theatre Owners (NATO) on April 3, 2019, in Las Vegas. [AP/YONHAP]

The key to success for an OTT service is in providing content worth paying for — which is exactly what Disney does best and why local contenders are distressed. Taking advantage of owning a wide array of mega hits, Disney started by removing its intellectual property from competitors.

It pulled out from Netflix in 2019 when it first started Disney Plus. In Korea, it recently stopped providing its content to local IPTV services and OTT platforms. KT announced on Aug. 3 that it will stop providing Disney content on its IPTV and OTT service Seezn from Aug. 31. SK Broadband and LG U+ will also take down Disney content.

Disney left Wavve and Watcha in April, depriving them of "Avengers" and "Star Wars" as well as 100 animations and movies.

Another strategy the company used was premiering popular films on Disney Plus simultaneously with the cinema releases. "Black Widow" and "Jungle Cruise" were debuted on Disney Plus.

"The rate of increase of Disney Plus subscription numbers has been slowing due to heavy competition," according to a report by NH Investment & Securities, explaining why Disney Plus is expanding overseas. The Covid-19 pandemic hit Disney's theme parks and film business hard, making Disney Plus the company's new breadwinner.

"Disney Plus is in its early stage and is achieving significant results through its global business expansion. The company's business model is based on the synergy between its various businesses and unique content, and can be seen as powerful," the report said. 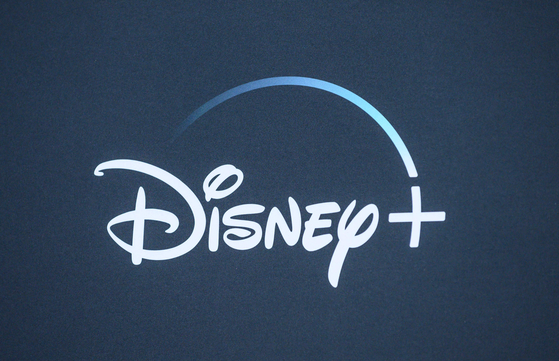 In this file photo, the Disney logo is seen on the backdrop for the World Premiere of ″The Mandalorian″ at El Capitan theatre in Hollywood on November 13, 2019. [AFP/YONHAP]


The time for solidarity

The arrival of Disney Plus means immediate competition for local OTT services, but it may also be a chance for them to consolidate.

Experts have called on local service providers to combine with each other through mergers and acquisitions in order to better compete with dominant players like Netflix.

Due to competition and other internal reasons that had not been happening so far.

"The local OTT services will definitely be feeling threatened, which means it may actually be the time that they find ways to cooperate with each other, whether that be merging or commercial partnerships," said Sung Dong-kyu, a professor at the School of Media and Communication at Chung-Ang University.

Netflix may be the biggest online video platform now, but audiences are already looking for different services, which gives local OTTs a chance for growth should they take the opportunity to fortify themselves, according to Sung.

"Disney's power comes from its list of mega-hit content, spanning animations, dramas and films," Sung said. "It managed to compete with Netflix by pulling its content off of Netflix and attracting viewers to its own platform. That's already happening in Korea, and so local platforms will have to work together to compete. But whichever way, they will need to come up with new strategies fast."

Local OTTs have been preparing themselves for the race through aggressive investment.

Producing high-quality original content is the healthiest way to go but costs a lot, said Rho Chang-hee, a researcher at the Media & Future Institute.

"Local OTT Watcha usually goes for exclusive content, meaning it purchases the right to exclusively release popular content, and that could be one method," said Rho. "Whichever way, the future isn't so bleak for local services. The OTT market is a growing one, so the advent of new competition could actually lead to the growth of the whole pie and new opportunities." 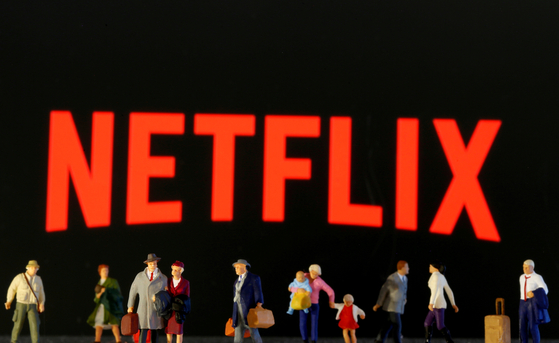 There are obstacles that Disney Plus will have to face, but it can prepare itself by taking a lesson from Netflix, especially regarding its conflict with local companies.

Netflix is currently in a lawsuit with SK Broadband over the payment of network usage fees. In 2019, SK Broadband complained that traffic created by Netflix resulted in higher costs for network maintenance and asked the video service to share the costs.

It asked the Korea Communications Commission (KCC), the media regulator, to mediate the disagreement between the two. Netflix filed a lawsuit in April 2020 before the KCC came up with an arbitration plan. Netflix asked the court to confirm that it has no obligation to pay network usage fees to SK Broadband.

The court dismissed Netflix's request, saying the issue should be resolved between the two private companies, forcing Netflix to come to the bargaining table with SK Broadband.

"An OTT service doesn't have to have a telecom partner, but having one does make it a lot easier," said an industry insider who wished to remain anonymous. "But it's intended more for IPTV services than mobile video services. Content providers need as much exposure as possible, and that means they want to get their content transmitted on television as well."

Disney Plus may indirectly pay telecom companies through Content Delivery Network (CDN) providers, as it does now in the United States and Europe. CDN companies, such as Akamai and Fastly, provide proxy servers and data centers that are geographically distant from the central network provider.

"It's a move to preemptively avoid risk about network usage fees," said an insider who wished not to be identified.