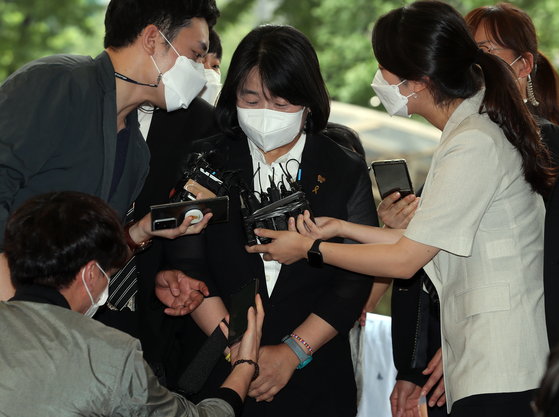 Rep. Yoon Mee-hyang, center, enters the Seoul Southern District Court on Aug. 11 to attend her trial. She was indicted on charges of exploiting survivors of Japan's wartime sexual slavery and misappropriating donations made to her civic group. [YONHAP]


The ruling party has withdrawn a controversial bill that strongly punishes any acts defaming victims of Japan’s wartime sexual slavery and civic groups that support them, following fierce protest over the bill from the aged victims.

On Aug. 13, Rep. In Jae-keun of the Democratic Party (DP) submitted a bill to revise the Act on Protection, Support and Commemorative Projects for Sexual Slavery Victims for the Japanese Imperial Army. The revision bill was designed to punish defamation of the victims, often referred to as “comfort women,” the euphemism Japan used.

According to the bill, a new clause was to be added to prohibit the defamation of sexual slavery victims, their families and groups concerning the victims by stating facts or spreading false information with an intent to criticize victims and their families.

The bill also said anyone who has spread false information about issues concerning the former comfort women through newspapers, magazines, broadcasters, publications, the internet, exhibitions, performances, debates, press conferences or speeches were to be punished by up to five years of imprisonment or a fine of up to 50 million won ($42,700).

The bill was drafted primarily by Rep. In, but was cosponsored by eight other lawmakers of the DP and an independent proportional representative, Yoon Mee-hyang, former leader of a civic group advocating comfort women issues.

Yoon became a proportional lawmaker for the DP based on her career of supporting survivors of Japan’s wartime sexual slavery, but the party suspended her membership in September 2020 after she was indicted on charges of exploiting at least one of the victims. In June this year, the party expelled her over alleged corruption after the state anti-corruption commission announced that she had been involved in making illegal real estate purchases.

Former comfort women and opposition parties fiercely criticized the bill, calling it an attempt to protect Yoon. Among the protesters was Lee Yong-soo, a 92-year-old survivor who held a press conference in May last year to question the financial transparency and integrity of Yoon’s civic group dedicated to resolving the “comfort women” issue, the Korean Council for Justice and Remembrance for the Issues of Military Sexual Slavery by Japan. 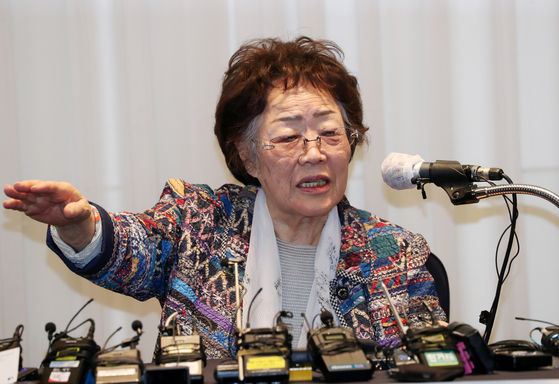 In this file photo from May 25, 2020, Lee Yong-soo, a former comfort women, speaks at a press conference in Daegu. [YONHAP]


Lee, a longtime activist for the cause of the young girls and women forced into sexual slavery during World War II, told the JoongAng Ilbo on Monday that the lawmakers once again ignored the survivors’ opinions.

“Why did they include civic groups in the bill when they said the bill is intended to protect the victims?” Lee said. “They never asked our opinions about this. They ignored us once again.”

Lee expressed furor that Yoon was a cosponsor of the bill. “This is crazy. She still does not know what her sin is,” Lee said. “She is trying to avoid responsibility and save herself. She is deceiving us again and again, as if what she had done to us was not enough. This is unacceptable.”

Lee also said it does not make sense to punish the people for defamation by stating truthful information. “How can it be defamation when you tell the truth?” Lee commented.

“Are they saying that I would be breaking the law by telling the truth about the Korean Council?” Lee continued. “This is ludicrous.”

The main opposition People Power Party (PPP) also criticized the bill and criticized Yoon for trying to protect herself.

After the bill stirred criticism, Rep. In withdrew the bill on Tuesday. According to her aide, the bill was pulled considering the survivors’ protest, although it was originally intended to protect them.