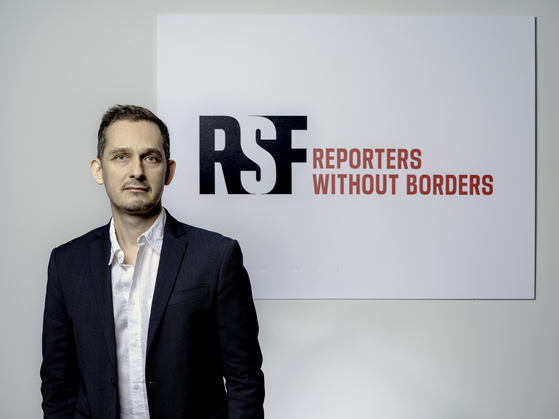 
An international media advocacy group called on Korean lawmakers to reject a controversial bill it said "could be instrumentalised against the media" and pushed back on claims by the ruling Democratic Party (DP) leader that it didn't know enough about domestic media to criticize the law.

In a statement posted to its website on Tuesday, Reporters Without Borders (also known as RSF, after its French name Reporters sans frontiers), voiced its support for domestic media groups’ opposition to the amendment to the Press Arbitration Act.

“The proposed amendment could open the door to any arbitrary interpretation and possibly be instrumentalised to put pressure on the media,” said RSF East Asia Bureau head, Cédric Alviani.

“No matter the legitimacy of the fight against disinformation, legislators should never create new legal tools without ensuring they include sufficient guarantees, as court decisions can be very subjective on those sensitive issues.”

RSF’s statement was immediately subjected to ridicule by DP leader Song Young-gil, who called it an organization “that doesn’t know what it’s talking about.”

Responding to reporters’ questions about the RSF statement after a party supreme council meeting on Wednesday, Song said, “They would believe anything if our domestic media associations said so. How could they know our [domestic] situation?”

Song’s comments came in for harsh criticism from the opposition People Power Party (PPP) and the minor progressive Justice Party, both of which oppose the media bill.

“In their greed to bulldoze the media gag bill into law in order to put a leash on the press, [the ruling party] now blatantly mocks the concerns of the international community,” said PPP spokesman Lim Seung-ho.

Lim also criticized the DP’s changed attitude to the RSF since President Moon Jae-in met with a delegation from the group in 2019. “It is truly shocking that when it was to the ruling party’s advantage, the president met with RSF representatives.

“Now that the RSF’s stance is to their disadvantage, [the ruling party] calls them a group that doesn’t know what it’s talking about.”

“Reporters Without Borders is an organization that pursues and advocates for freedom of the press throughout the world. It is not a group that doesn’t know what it’s talking about.”

Responding to Song’s characterization of his group, Alviani told the Korea Joongang Daily it was “not true that RSF doesn’t know anything about Korea.”

"RSF has three correspondents in Korea who conduct research, collect factual information and translate documents, but they do not direct the group’s opinion or position," he said. "We are totally independent of any government organization, and we support the doctrine of press freedom everywhere."

He also pushed back on claims that RSF simply repeats what Korean domestic media associations argue.

“RSF is an international non-governmental organization. As such, we do not coordinate our opinions or statements with domestic Korean media groups. We rely on our correspondents and local partners only to collect information."

Alviani added, "South Korea is ranked 42nd in the world for press freedom and first in Asia. It is a very important country for us - we are not trying to fight the government or engage in politics. We support the fight against misinformation, but not at the cost of rule of law and democratic principles."

In its Tuesday statement, RSF said a significant issue with the current media bill is the fact that it increases legal liability for the release of false news written with “intention” or “gross negligence,” with a penalty of up to five times the alleged damage caused by reporting, greatly increasing the risk of criminal prosecution for media outlets.

The group also pointed out that the bill neither includes a detailed definition of the offense nor defines a system to prove the falsehood of the reporting and evidence of the perpetrator's intention.

Meanwhile, the PPP vowed to filibuster the bill during the plenary session of the National Assembly, which has been delayed to Aug. 30 following the bill’s late approval by the Judiciary and Legislation Committee.

“We will demand an unlimited debate on this law to hinder the law’s passage as much as possible,” said the PPP floor leader Kim Gi-hyeon at a party leadership meeting on Thursday.

“It is a bill that violates freedom of speech, controls and censors the media, essentially infringing on the people's right to know,” Kim said.

Kim also drew parallels between the media bill and the anti-leaflet law which prohibits the dispatch of anti-Pyongyang propaganda across the inter-Korean border. The opposition has accused the government and the ruling party of caving into demands by Kim Yo-jong, the sister of North Korean leader Kim Jong-un, to end the propaganda campaigns.

“Just as the ‘Kim Yo-jong Act’ bans leaflets, the [media] law will bring disgrace to [us] as a country set against human rights,” he said.

The PPP floor leader also said that the PPP’s right to participate in the legislative process was violated by the DP pushing the bill without the opposition’s consent or scrutiny during the judiciary committee’s review of the bill.

The party has said it will launch an appeal to the Constitutional Court if the law passes.