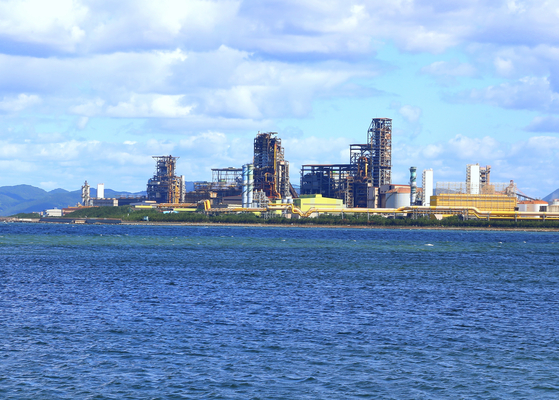 Posco’s Finex-based factory at Pohang Works, which is essential in the hydrogen-based reduction ironmaking process. [POSCO]

Posco’s plan to achieve carbon neutrality by 2050 is noteworthy as a positive example in the worldwide steel industry, a group of global institutional investors said.

According to the report, Posco declared to go carbon neutral by 2050, dividing the ambitious goal into several clear and specific steps in both medium- and long-term plans. The report also mentioned that Posco’s climate action report, which was released last December, outlines its plan on low-carbon steel technology and products.

Moreover, Climate Action 100+ and IIGCC explained that Posco is the only major steelmaker committed to building a green hydrogen production facility at a large scale, adding that Posco is planning to establish a hydrogen value chain.

Climate Action 100+ also released a benchmark last March, evaluating the commitment and action plan of 159 companies accounting for 80 percent of industrial carbon emissions worldwide. On the list, Posco got the highest marks among steel producers in terms of decarbonization practices.

“Posco’s constant and active effort to communicate with global players based on its climate action report seems to have paid off, as Posco is acknowledged to have set a positive example in both the benchmark and the report on decarbonization practice,” an official from Posco said.

“It is especially meaningful as Posco’s effort to carry out environmental, social and governance management on the basis of corporate citizenship has been recognized.”