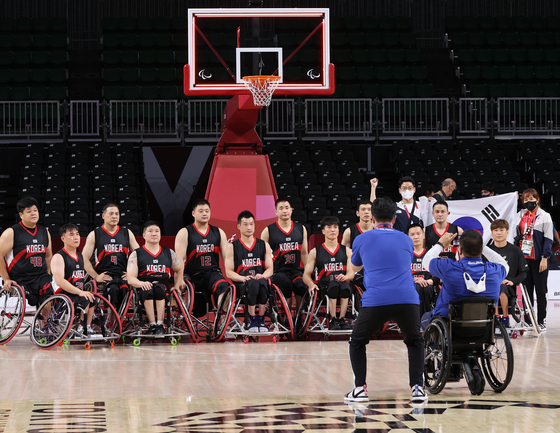 The Korean wheelchair basketball team pose for a group photo after their loss against Spain at the 2020 Tokyo Paralympics, on Aug. 25. [YONHAP]


With Canada's 63-52 victory over Colombia on Monday morning, the Korean wheelchair basketball team have missed out on a chance to advance past the group stage at the 2020 Tokyo Paralympics.

As only the top four teams from each group move to the knockout stage, Korea, with its record of one win and four losses with a -27 point differential, needed Colombia to win by a margin of between 11 and 52 points; a win for Canada by any point margin would knock Korea down to fifth place, as it would be Canada's second win of the tournament. The latter scenario occurred.

While the team will be disappointed to have missed out on advancing, they can still be proud at having written history this year by qualifying for the Paralympics for the first time since Sydney 2000. On Saturday against Colombia, they brought Korea its first Paralympic wheelchair basketball win in 21 years.