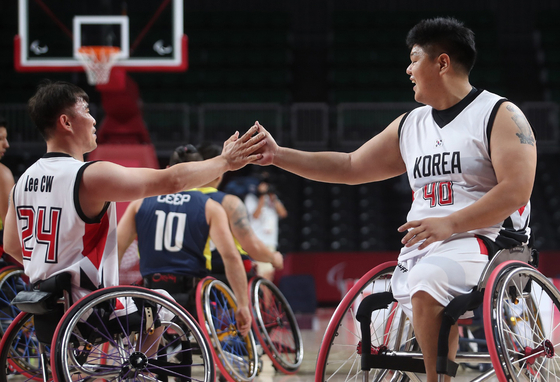 Korean wheelchair basketball players celebrate after scoring in the fourth quarter of a game against Colombia at the 2020 Tokyo Paralympics. [NEWS1]

Korea took an early 19-10 lead in the first quarter and held on to that for the rest of the game. Colombia narrowed the gap in the second and final quarters, but Korea kept the momentum up to hold on to a comfortable lead for the entire game, finishing with a nice 12 point cushion.

Saturday's game was Korea's first victory in Tokyo and its first victory since the 2000 Sydney Paralympic Games. The team has already lost to Spain, Turkey and Japan to sit at fourth place in Group A. Colombia are in fifth and Canada in sixth.

The top four teams from each group will advance to the knockout stage of the tournament. Korea currently edges out Colombia and Canada with one with and three losses, but it also has a game in hand. If Korea beats Canada when they face off on Sunday and Colombia loses to Turkey, Korea will be guaranteed a space in the quarterfinals.

Korea will face Canada at 5 p.m. on Sunday.