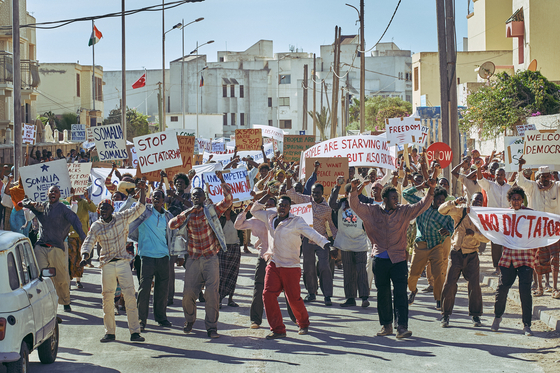 A scene from the film "Escape From Mogadishu," portraying Somali civilians protesting against the central government. [LOTTE ENTERTAINMENT]


Filmmaker Ryoo Seung-wan’s action blockbuster “Escape from Mogadishu” surpassed 3 million in ticket sales on Sunday 33 days after its release on July 28, casting aside the record set by Marvel’s "Black Widow” of 2.96 million admissions to become the most-watched film at the local box office this year.

Since the Covid-19 pandemic hit the country in February last year, “Mogadishu” is the third highest-selling local film after “Deliver Us From Evil” and “Peninsula,” which recorded 4.35 million and 3.81 million in box office sales, respectively. Of the three, “Mogadishu” had the biggest production budget with 25.5 billion won ($22 million). Despite the heightened social distancing measures, positive reviews drew audiences to the theaters.

“Since the pandemic hit, the main moviegoers who are visiting theaters are those in their 20s and 30s,” said Jung Kyung-jae, the head of the film department in Lotte Cultureworks. “The biggest outcome from this film was that we could, once more, captivate the audience’s interest toward films.”

The JoongAng Ilbo, an affiliate of the Korea JoongAng Daily, learned from the film’s distributor and production studio Filmmaker R&K the backstory of the film’s success.

“We did not anticipate that Level 4 social distancing would drag on this long,” Filmmaker R&K’s CEO Kang Hye-jung said. Kang runs the studio with her husband and filmmaker Ryoo. “If we had forecasted this situation, we wouldn’t have released the film in local theaters. It’s as if we were suddenly placed in the ring of a boxing fight, but it’s the UFC (Ultimate Fighting Championship).” 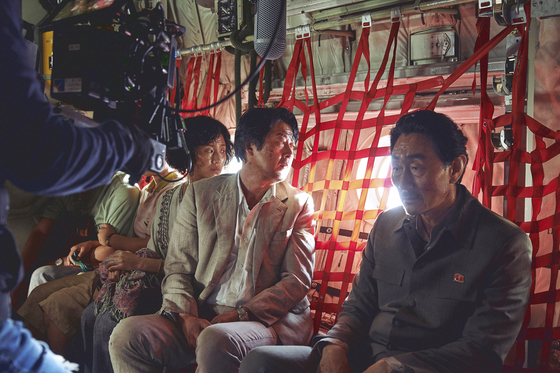 
Not only did theaters have to close at 10 p.m. because of the regulations under Level 4, the film also had to compete with the live broadcast of the 2020 Tokyo Olympics.

“Escape from Mogadishu” is based on a true story which took place in Mogadishu, the capital of Somalia in 1991. North and South Korean embassy workers had to band together to escape the civil war. A star cast including Kim Yoon-seok and Zo In-sung portray the South Korean embassy workers while Huh Joon-ho and Koo Kyo-hwan portray those from the North. The film was shot entirely in Morocco, marking the first time a local movie has been completely filmed overseas.

“We thought the film contained a narrative which would appeal to a wider range of audiences and give them a good reason to want to see it on the big screen [due to gun-action and car-action scenes],” Jung said. “We were confident about our film from the beginning. We strategized to secure plenty of time for the film to screen in theaters so that people can gradually get to see it after hearing word-of-mouth reviews. We also planned out screenings in theaters with special effects such as IMAX, Dolby Atmos, 4D and Screen X formats.”

It helped that the theater industry agreed to fully support the distributors of the two big-budget films for the summer —“Mogadishu” and “Sinkhole” — by not taking any of the revenue from ticket sales until the distributors had recovered 50 percent of the production costs. They came to this agreement under the condition that the films would be released during the summer. Prior to the pandemic, the norm has been that theaters and film distributors divide ticket sales in half.

The screenplay for “Mogadishu” was originally created by another production company Dexter Studio in 2013 and was set to be directed by filmmaker Kim Yong-hwa. (Kim broke away from Dexter Studio last year to establish his own production company Blaad Studio.) As he became immersed in another film, “Along with the Gods” series (2017-18), he offered the script to Ryoo.

“Ryoo has plenty of directing experience on various kinds of topics in commercial films, and I thought he was the best man for the job as he already has experience telling the narrative of North and South Koreans through his prior film ‘The Berlin File’ [2013],” said Dexter Studio’s CEO Kang Jong-ik.

“I knew that the actual event was very dramatic, and as I dug deeper into my research I found out that Dexter Studio was already working on a screenplay and dropped it,” Kang said. “By coincidence, filmmaker Kim gave us the screenplay [...] The original screenplay was more steered toward humanism, and Ryoo asked Kim if he could bring the focus to his area of expertise, spectacles. Kim gave his consent, and so we immediately started on this project.” 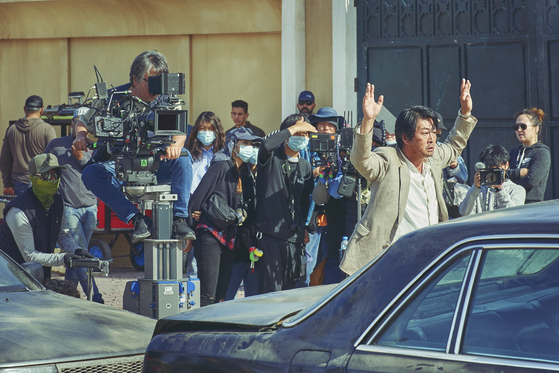 The film was entirely shot overseas, with the Korean staff collaborating closely with local staff in Morocco. [LOTTE ENTERTAINMENT]


Somalia still remains off-limits to travelers due to the ongoing war. Kang told the press that it wasn’t easy to recreate a city from 30 years ago that her staff have never been to. The preparation to shoot overseas was meticulously pre-planned by the local production team and location manager Mohamed Benhmammane who was behind Hollywood films such as “Mission: Impossible – Rogue Nation” (2015) and “The Bourne Ultimatum” (2007).

“The critical factor behind our success lies in our Korean staff,” Kang said. “Every day was a battle between the mentality of ‘Can we do this? Or can we not?’ The art team especially put effort into recreating the architecture and even the geography of Somalia back then only relying on past records.”

According to Kang, the advance party of staff was dispatched three times earlier than that of “The Berlin File,” which was six months ahead of the shooting. As there is no direct flight to Morocco, it took them some 30 hours. The volume of cargo was three to five times larger than the average film, too. From the food to special props, Korean furniture placed inside the embassy, guns, gun powder and detonators exported from Hong Kong and the U.S., every prop was transported to Morocco and set up the city. Since the staff in Morocco and foreign actors were all from culturally diverse backgrounds, the set was always buzzing with people speaking diverse languages such as Korean, Arabic, French, Spanish and Italian.

“In the back of my mind, I, too, had doubts [about the set]. Could this really work?” Kang said. “There was only 10 days left for shooting when Morocco heard about the coronavirus. There were some unfriendly stares or people calling out menacingly, ‘Asia go home.’ Two of our staff who stayed behind to wrap up the set were trapped in the airport for 30 hours and had to take a detour to get home due to a shutdown.” 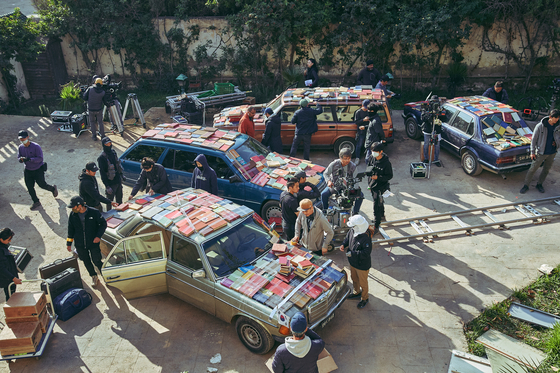 A car chase scene in the film as embassy workers and their families attempt to escape to the embassy of Italy is one of the most dramatic in the film. [LOTTE ENTERTAINMENT]


The success of the film is not limited to within Korea. Earlier this month, Lotte Entertainment reported that the film’s distribution rights have been sold to 50 countries, a considerable feat as the global film market is still reeling from the pandemic.

“I think people are much more conservative when it comes to stories about North and South Korea,” Kang said, when asked how she was feeling about the response in local theaters. “There were many of those who saw the film politically [...] We also saw positive reviews such as that we did not overly dramatize the narrative, making it more realistic [for the audience].

“When we showed our edits to a producer in Hollywood, he asked us how we were able to shoot all of this in 76 days. In Hollywood, it would have cost them at least 100 billion won but when we told him that the total production cost was 25 billion including the cost for promoting the film, he said, ‘I cannot believe it.’ ‘Mogadishu’ showed the world the exceptional ability and talent of our Korean staff.”