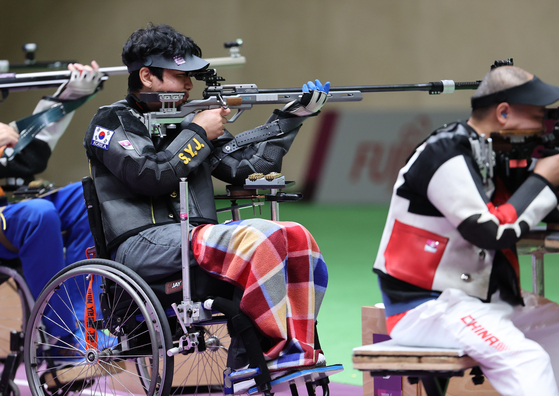 Shim Young-jip shoots during the men's 50-meter rifle three positions sport class one finals on Friday at the Asaka Shooting Range in Tokyo. He won the bronze medal at the event. [YONHAP]

However, the three different positions are adjusted for those competing in a seated position. They remain in wheelchairs for all three but in the prone position, they are given larger tables than the kneeling position for more stability. In the last standing position, athletes in wheelchairs detach their tables and those standing may use a stand for support.

Going into the elimination round, Ju was third with 305.3 points, Park was fourth with 305.2 points and Shim was sixth with 302 points.

But in the elimination stage, everything changed as Ju dropped out of contention after his fourth shot, finishing the final in sixth place. En route to the finals, Ju had set a Paralympic record in the qualifications. Park dropped out next, shooting a surprising 9.0 in the elimination round to drop out at fifth. Then, with only three left on the range, Shim shot a 9.2 to win bronze, his first Paralympic medal.

The bronze medal comes as a shot at redemption for Shim. At the 2012 London Games, he narrowly missed out on the podium twice, finishing fourth in two events.

Park and Shim have one more shot at earning some more silverware at the Tokyo Games as they will compete in the mixed 50-meter prone on Sunday.