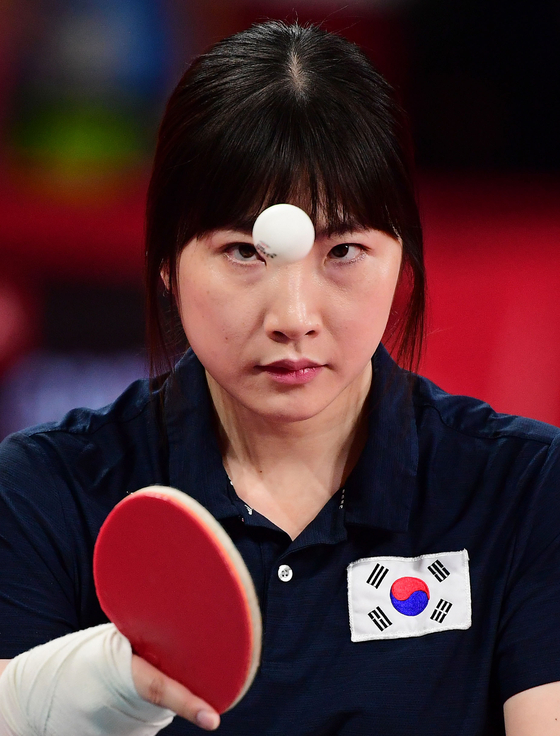 Seo Su-yeon plays the ball against Nadezhda Pushpasheva of Russia on Thursday at the Tokyo Metropolitan Gymnasium. [JOINT PRESS CORPS]


Korean table tennis players had a good day three of the 2020 Tokyo Paralympics, with Jung Young-a and Seo Su-yeon lined up to medal in the event after advancing to the semifinals.

The Tokyo Games offers two bronze medals, so all four athletes that reach the semifinals are guaranteed to medal. What medal Jung and Seo will take home will be decided on Saturday.

Jung won her first women's singles class 5 match against Tamara Leonelli of Chile in straight sets to advance to the quarterfinals.

In class 5, athletes compete in a wheelchair. They have normal sitting balance, arm and hand function. With good trunk function, they can stretch out to the sides to hit the ball. The sport class includes athletes with lower spinal cord injuries.

Later in the day Jung defeated Panwas Sringam of Thailand 3-1 after 30 minutes. Jung will play her semifinal match on Saturday at 1:40 p.m. The gold medal match will follow the next day at 4 p.m.

Alongside Jung, Seo also advances to the semifinal stage of the women's singles class 1-2 after defeating Ana Prvulovic of Serbia in straight sets.

Athletes competing in class 1 to 2 compete in a wheelchair but have no sitting balance and impaired playing arm. Parts of Seo's upper body and lower body were paralyzed in 2004 due to a spinal cord injury from medical malpractice.

For Seo, reaching the quarterfinal was half the battle. On Thursday, Seo defeated 61-year-old veteran Nadezhda Pushpasheva of Russia after a big comeback to top Group C and advance to the quarters.

Win or lose, the two showed great respect for each other. After the match, Seo was seen handing over a small present to the Russian to express her respect.