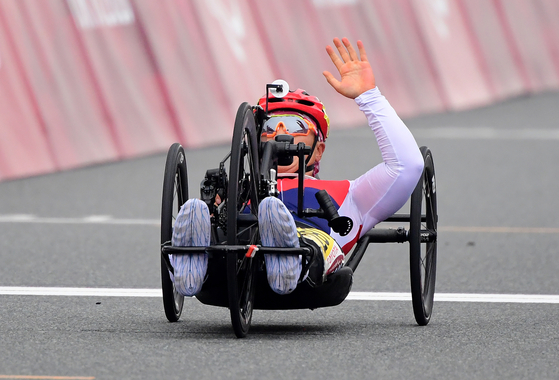 Lee Do-yeon waves as she crosses the finish line of the women's class one to four road race at the Fuji International Speedway in Shizuoka, Japan. [JOINT PRESS CORPS/YONHAP]


Three Koreans completed the grueling cycling road races on a hot day at the Tokyo Games on Wednesday.

Lee Do-yeon came in 10th in the women's road race class one to four, completing the 26.4 kilometers in 1:00:34, four minutes and 19 seconds behind gold medalist Jennette Jansen of the Netherlands and Lee Gyeong-hwa finished 14th with 1:15:23, 19 minutes and 13 seconds behind the leader.

Later in the day, Yoon Yeo-keun finished 10th in the 79.2-kilometer-long men’s class four road race. Though the results may have been disappointing to the veteran athlete, it is an achievement alone to have completed the grueling road race, also called the marathon of cycling, with some athletes dropping out during the race.

The three Korean athletes have one more chance to reach the podium on Thursday where they will team up for the mixed team relay.