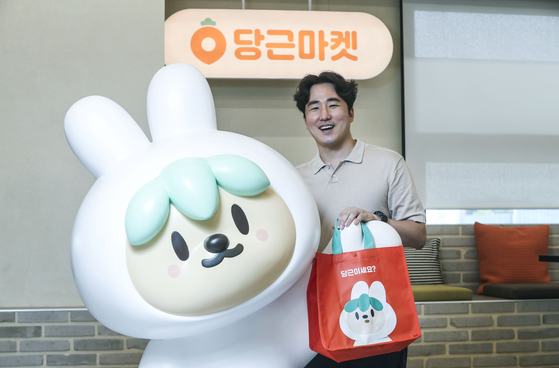 Gary Kim, co-founder and co-CEO of Danggeun Market, poses for a photo during an interview with the JoongAng Ilbo at the company’s office in Seocho District, southern Seoul on Aug. 13. [KIM SEONG-RYONG]


Danggeun Market, in which secondhand goods can be traded via an app called Karrot, said it recently joined the unicorn club, which refers to start-ups that have such promise they are valued at $1 billion or more.

The company, which is commonly known as Karrot Market internationally, recently raised 178.9 billion won ($153 million), which the company claims gives it a 3-trillion-won valuation, up 10-fold in two years. The accomplishment comes less than six years since the app was first established.

The number of Danggeun Market registered users reached 21 million in July. It has 15 million monthly active users (MAU), a 30-fold increase compared to January 2018. It only took about two years and eight months to reach 10 million MAU, compared to Coupang's three years, and the five years and five months for Baedal Minjok.

Danggeun Market focuses on going “hyperlocal,” a new buzzword for digital life in Korea as people whittle down the geography of their daily existences. Its main concept is listing products and services offered for sale within a six-kilometer (3.7 mile) radius.

“Neighborhood markets are huge, but no Korean company is using them properly,” said Gary Kim, co-founder and co-CEO of Danggeun Market. “Danggeun Market will achieve local commerce that connects online and offline.”

Kim recently sat down with the JoongAng Ilbo to talk about his journey with the app and future plans.


Q. Danggeun Market is now valued at around 3 trillion won.

A. The outlook of global investors about the Korean market has changed. They consider Korea as one of the top 5 markets in the world. They certainty think that an app could be valued up to 100 trillion won if it becomes very popular locally, like Kakao or Coupang. Danggeun Market’s expandability as a local business and potential to grow as a super app have been recognized globally.


Do you mean the investments were made due to their outlook on the Korean market, not the app’s potential for growth globally?

It was not easy to evaluate the app because no foreign companies run such a service like Danggeun Market. Global investors analyzed that Danggeun Market could grow as an app that is valued at some trillions of won even only in Korea. Of course, its potential for growth globally was also considered.


I heard DST Global, a global investment firm that previously made investments in Facebook, Twitter and Groupon, invested in Danggeun Market.

Shortly after the Series C funding that took place in 2019, DST Global came to visit us to our office. The company said it has “never seen a commerce app that users visit so frequently and spend lots of time on the app like Danggeun Market.” Then, we have had many meetings with the company online.

During a meeting via Zoom, Yuri Milner, CEO of DST Global, said he wants no explanation but asked to see the app first. He said Danggeun Market is unique in that it is a commerce-based and community-based app at the same time, and it was the reason why the global company decided to invest in our company.

How the funds will be used?

We plan to use the new funding to hire talent, invest in artificial intelligence [AI] and machine learning to develop technologies and enter the global market.


Some users even say they are addicted to Danggeun Market. How did the app attract so many people?

I sometimes meet Danggeun Market users on buses and find that they frequently visit the app while using KakaoTalk or watching videos via YouTube. For them, Danggeun Market is not just an app to buy or sell products but a type of social media. I think people enjoy not only buying products on Danggeun Market but also knowing more about their neighborhoods.


The number of registered users is already above 20 million. Do you think it could gather more?

The number of monthly users of Kakao and Naver are over 40 million. I believe Danggeun Market could grow like that. It will be possible if it could become an app that is closely connected to people’s daily lives, rather than just a platform that trades secondhand products.


Any specific plans for that?

First of all, we will become a platform that offers users some services that are deeply connected to their daily lives. Currently in Korea, there are thousands of O2O [online-to-offline] apps that provide services like cleaning, laundry, car washing, interior and delivery. But it’s not easy for them to garner new users.

Those start-ups can use traffic from Danggeun Market. And Danggeun Market users can easily access to those comfortable daily life services through our app.

Can you explain that more specifically?

In the Nearby section of the app, there is already a service that connects users to various apps that offer laundry and cleaning services. A service that offers people discounts in GS25 convenience stores was recently added to the list as well.

We aim to offer more services like those in the future, so that Danggeun Market users can access to them without registering with the apps. Transaction will be available with Danggeun Pay, a payment service that we’re preparing to introduce.


When will Danggeun Pay be released?

It’s ready. We’ve been waiting for an approval from the Financial Supervisory Service. It will allow users to make payments for stores near their home through the app, so that they can just pick up the products later. Danggeun Pay will play a key role in expanding our business portfolio that aims to offer users many daily life services.


Danggeun Market limits transaction with sellers within six kilometers of buyers. What’s the reason for that?

The value of “restoring community” can go in line with business. If a service is based in community, it would be able to gather people. With the people, we can seek for new business opportunities. For now, Danggeun Market's traffic comes from the service that allows trading secondhand products, but in the future, the community in the app will play the key role.


Why does Danggeun Market emphasize hyperlocal so importantly?

It’s our attempt to focus on neighborhoods that people can go to with just flip flops. In people’s neighborhoods, there are many stores and cafes that only some residents know. We aim to make a community-based service that helps people discover those markets near them. If it succeeds, commerce will follow. That's hyperlocal.

Neighborhood markets are huge, but no Korean company is using them properly. Danggeun Market will achieve local commerce that connects online and offline. 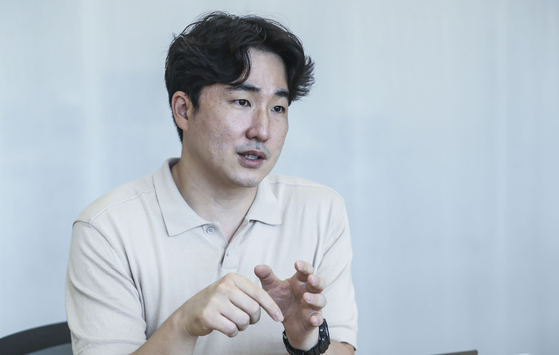 Kim speaks about the app’s future during an interview with the JoongAng Ilbo on Aug. 13. [KIM SEONG-RYONG]

Domestically, Naver. Lots of Koreans use Naver to find locations of places and look at reviews when searching for stores. Naver Café, which was just an online community, recently added a service selling used goods in a neighborhood. Naver knows the importance of hyperlocal very well.

But in terms of community, Danggeun Market is the leader and Naver is chasing us.


Danggeun Market is currently available in the United States, Canada, Britain and Japan. Any results?

We’re just testing the model so far. We’ve been improving the app with some feedback we got over the last two years. We aim to formally roll out apps in many countries all over the world by the first half of next year.


Cultures and environment vary by countries. How are you going to handle that?

The differences are very big. Unlike Seoul that almost everything can be done within four-kilometer radius, it has to be at least 30 to 40 kilometers in the United States and Canada. Administration systems in overseas countries are not clear as well. We’ve been working to localize the service but will maintain the format that makes users register their location.


Any plans for going public?

No plans yet. Listing means suggesting the public buy our company’s shares, so I want to do it when the company could achieve better profitability. We will continue to raise investments from professional investors and firms for a while.


What do you want people to recall if they hear about Danggeun Market?

My neighborhood and local. I want people to trade secondhand products, meet neighbors and talk with them and discover stores and buy products there through Danggeun Market. When people could think of Danggeun Market when they recall “our neighborhood,” that is the time we could finally become a local super app.