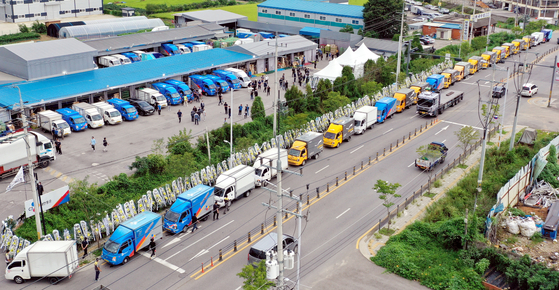 Dozens of delivery trucks line the streets next to a logistics terminal in Gimpo, Gyeonggi, on Thursday, in remembrance of the late logistics agency manager, Lee. Leaving behind a two-page suicide note detailing harassment by his deliverymen in the Parcel Delivery Workers’ Solidarity Union, Lee committed suicide on Aug. 30. [YONHAP]


A 40-year-old manager of a logistics agency in Gimpo, Gyeonggi, committed suicide last week after claiming severe harassment by his deliverymen.

The deliverymen were a part of a labor union affiliated with one of Korea's two major umbrella labor unions — the Korean Confederation of Trade Unions.

"I could not bear the tormenting, deliberate slacking and unilateral strikes by the delivery workers in the Parcel Delivery Workers' Solidarity Union," read the two-page suicide note by the man, surnamed Lee. Lee was a logistics agency manager contracted by CJ Logistics. "Every day was like hell for me."

On Aug. 30, Lee took his own life by jumping off an apartment building in Gimpo, Gyeonggi. His body was found in the apartment's garden by a resident in the area.

In his suicide note, Lee put down the names of the 12 union members and wrote "I hope you don't forget that there was a person who chose to die because of you."

Lee had worked at a logistics agency in Gimpo, Gyeonggi, for 12 years, since 2013.

Starting off as a deliveryman himself, Lee was later became manager, which put him in charge of the consignment of parcels in the agency's designated area, the managing of the 18 delivery workers in his agency and dealing with civil complaints.

Lee joined the Cooperative Association of CJ Logistics Courier Agencies, an association for the protection of rights and interests of logistics agencies, in May this year when his agency's delivery workers demanded an increase of commission fees from 9 percent to 9.5 percent.

When Lee refused, 12 of his deliverymen joined the Parcel Delivery Workers' Solidarity Union. They went on strikes and allegedly verbally abused Lee.

When the workers went on their strikes, Lee's family filled in to sort and deliver over 100 packages, according to the Cooperative Association of CJ Logistics Courier Agencies.

Lee's allegations of harassment were evidenced by messages he had received on his phone from the couriers, filled with comments such as "I want to kill you," and "You should be asking us to save your life."

The Cooperative Association of CJ Logistics Courier Agencies and Gimpo Police Station concluded Lee's cause of death as suicide on Aug. 31.

Also a father of three, Lee's death sparked national outrage against the harassers as well as the labor union.

Some workers in the industry say that problems between agencies and its couriers have been aggravated ever since the labor union for delivery workers was formed in 2017.

"The union views the managers of logistics agencies as the enemy," said one logistics agency worker. "It is time to end this vicious cycle. We must be able to negotiate issues without the union unilaterally going on strike."

The Parcel Delivery Workers' Solidarity Union averted the responsibility to Korean conglomerate and also the logistic agency's contractor, CJ Logistics, in a statement on Thursday.

"Lee's struggle with the union members arose amid issues with commission fees, which has been a problem for a few years now," read the statement. "When we requested fairer commission fees to our contractor [CJ Logistics], they averted the responsibility to the agencies, and have set up a stage for conflict between the agencies and delivery workers."

As for the 12 couriers mentioned in Lee's suicide note, the union said that it will refer the individuals to the union's disciplinary committee and hold them accountable for their misbehaviors.

The Parcel Delivery Workers' Solidarity Union was brought to the public's attention when couriers on Jun. 9 went on an eight-day general strike against large logistics firms such as Hanjin Transportation and CJ Logistics, calling for improved labor conditions.

All workers resumed work by Jun. 17 after an agreement was reached, but Lee's suicide brought to attention the union members who have continued strikes at the agency level.

Lee's family is planning to press charges against the 12 delivery workers as well, according to the Cooperative Association of CJ Logistics Courier Agencies.

Over 400 funeral wreathes lined the halls of the funeral home and around 100 delivery trucks followed the hearse on Thursday.


If you or someone you know is feeling emotionally distressed or struggling with thoughts of suicide, LifeLine Korea can be contacted at 1588-9191 or the Crisis Counseling Center at 1577-0199. The Seoul Global Center offers English-language counseling, contact 02-2075-4180 (+1) to arrange a session. Other international helplines can be found at www.befrienders.org.