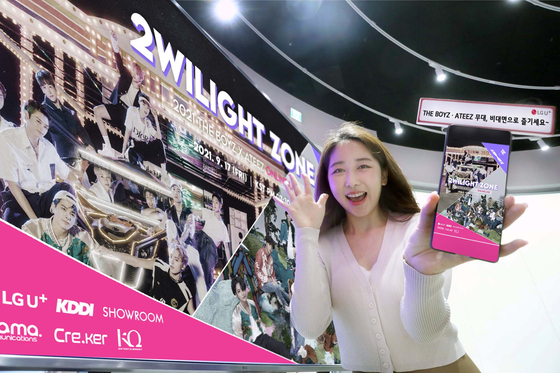 LG U+ will co-organize an online K-pop concert featuring boy bands The Boyz and Ateez with Japanese telecom company KDDI, to take place on Sept. 17. [LG U+]


The concert, dubbed “2021 The Boyz & Ateez Online Live: ‘2wilight Zone’” will take place on Sept. 17 at 7:30 p.m. and will be livestreamed through the three online video platforms run by LG U and KDDI.

The Boyz recently released its sixth EP “Thrill-ing” on Aug. 9 and Ateez will drop its seventh EP “Zero: Fever Part. 3” on Sept. 13.

In Korea, the concert will be streamed on LG’s U+ Idol Live, an online video streaming service specializing in K-pop related content. In Japan, it will be streamed on KDDI’s online video platform au Smart Pass Premium as well as smash., an online video platform run by KDDI’s affiliate Showroom.
Tickets can be bought through the U+ Idol Live app, Interpark or MyMusicTaste. People signed onto SK Telecom and KT for their phone subscriptions can also watch the concert.

“As the global awareness of K-pop rises around the world, we have come to co-organize an event with an overseas telecom company, KDDI,” LG U+ said in a statement.

“We hope that global K-pop fans’ thirst for concerts is quenched even partially through our online concert.”