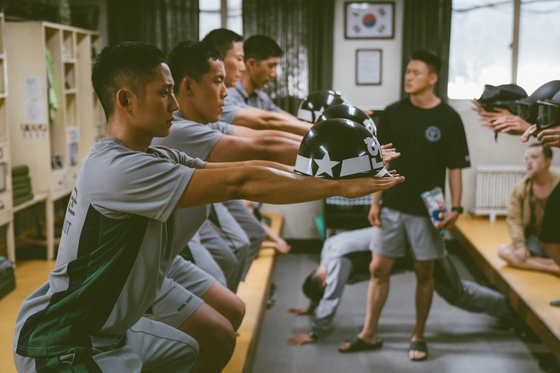 A scene from the Netflix series "D.P." where lower ranking soldiers are punished as a group. [NETFLIX]

This article, Article 3 of the Military Service Act, appears in front of every episode of Netflix original series “D.P.,” one of the hottest shows today which almost immediately shot to No. 1 on Netflix Korea’s Top 10 list after its release on Aug. 27.

The series begins with a young man named An Jun-ho (played by Jung Hae-in) entering military camp to fulfill his mandatory service. A fast-thinker with a keen eye, Jun-ho is soon spotted by his superior and recruited to a unit called Deserter Pursuit, or D.P. for short. The D.P. unit is tasked with missions to catch and arrest soldiers who go AWOL.

The six episodes for the first season center on the stories of five different escapees as Private An Jun-ho and Corporal Han Ho-yeol dig for clues about their whereabouts. During the process, the series does not hesitate to shed light on the dark and violent bullying that frequently takes behind the closed doors of enclosed military camps, which becomes the ultimate reason behind the deserters’ escapes.

Although the story is about a distinctly local aspect of Korean culture, the series has managed to appeal to audiences around the globe. According to global market research company FlixPatrol, "D.P." made it to the Top 10 list in countries such as Hong Kong, Indonesia, Japan, Malaysia, the Philippines, Singapore, Taiwan and Thailand.

“It’s about the military, but it’s also a miniature of the society we live in today,” director Han Jun-hee said at an online interview last week when asked about the series’ global success. “It’s essentially about relationships, events that can happen anywhere in any society. I think viewers may unconsciously look back on themselves as they watch the series and think about what kind of a person they are.” 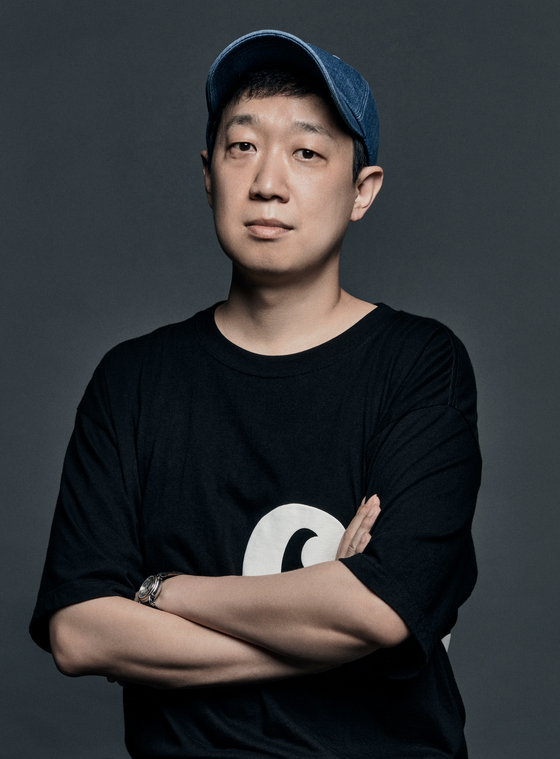 
The series is adapted from a webtoon “D.P. Dog’s Day” published on Lezhin Comics from 2015 to 2016. Written and drawn by cartoonist Kim Bo-tong, the stories of the escapees are based on true event that Kim witnessed when he was active as a member of Deserter Pursuit.

In the webtoon, Kim compares the chaos of the military to a “detention camp for chimpanzees.”

“It becomes easier to manage a cluster of people within an enclosed space when the hierarchy is unquestionable. So violence within the organization is accepted due to the distinctness of the situation,” Kim describes.

Kim co-wrote the series with director Han. Although there were few changes from the original webtoon, the core message remains the same and is even strengthened due to the vivid depiction of the atrocious violence on screen. Soldiers of lower rank, including the escapees, are bullied and punished for absurd reasons, and some for no reason at all.

From the level of violence down to the minute details of how the weak are bullied, the portrayed scenes are so close to reality that many of the reviews online comment that merely watching them was triggering post-traumatic stress disorder (PTSD), or giving them nightmares. 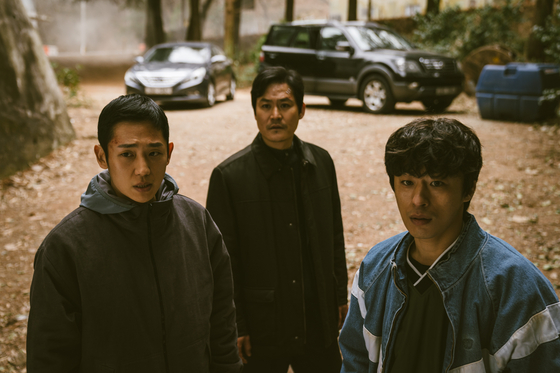 
The series has also raised the question about whether such harsh treatment is still happening today.

"D.P." is set in 2014, but the stories are adapted from Kim’s own experience in the early 2000s and an incident that occurred in 2005 dubbed the “Private Kim case.” At a guard post in the Demilitarized Zone in Yeoncheon County, Gyeonggi, a private named Kim Dong-min shot and killed eight soldiers and wounded four others. The Ministry of National Defense (MND) later reported that Kim said committed the crime due to persistent bullying from his superiors.

In 2014, inhumane treatment in the military made headlines after a soldier was beaten to death by his superiors and another soldier shot and killed five soldiers and wounded five others due to bullying.

“I believe 2014 to 2015 was the transition period of military culture,” Han said as he explained the reason behind the setting of the series. “I believe it has gotten better now, and it should. But there still are incidents, cases, happenings that we remain oblivious to, but that doesn’t mean that they didn’t happen. I hoped to throw the question to the viewers what could we do to resolve these practices or were we turning a blind eye to them."

The description of unjust treatment in the series became such a topic of interest that the MND issued a statement on the issue. 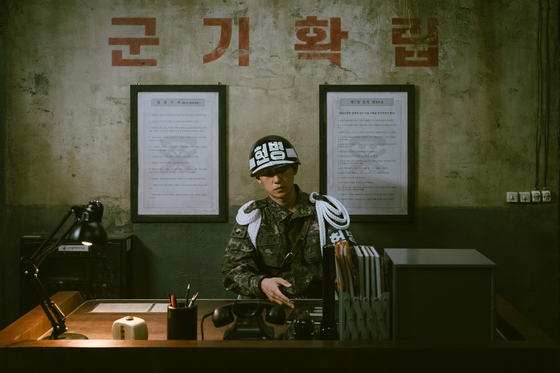 Private An Jun-ho on nighttime duty in the Netflix series "D.P." Since its release last month, the series has shone a light on the violent practices in the military. [NETFLIX]


“The ministry and respective units have consistently been making efforts to eradicate unfair treatment in the military such as violence,” vice spokesperson Moon Hong-shik commented during a briefing Monday. “As the public is very well aware, the environment is changing as soldiers are now allowed to use smartphones after hours and such incidents can no longer remain concealed.”

“D.P. was created to end the delusion that things are better now,” cartoonist Kim wrote in an Instagram post on Aug. 31. 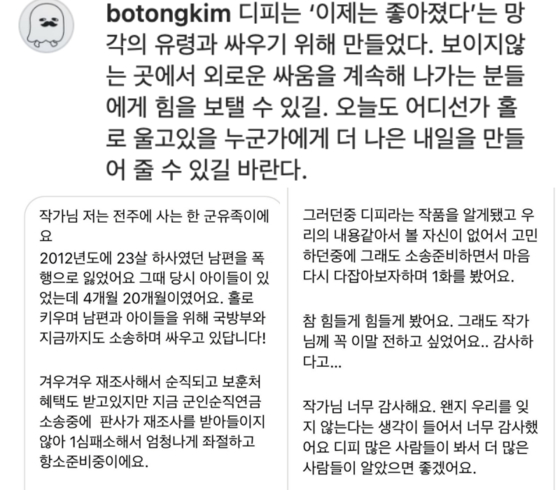 Creator Kim Bo-tong continues to speak out against inhumane treatment in the military and those suffering from it on his social media. [INSTAGRAM CAPTURE]


In the post, Kim shared an Instagram message he received from a bereaved family member of a soldier.

The sender identified herself as a widow who lost her husband in 2012 due to internal violence within the military.

“I want to say thank you,” she wrote, “I feel as though we haven’t been forgotten, and I hope more people will watch the series and become aware [of the military culture].”

“I hope [the series] can give strength to those continuing on this lonely battle,” Kim wrote in the post. “I hope the story can provide a better tomorrow to those still weeping alone.”

In the original webtoon, the story ends with a scene of a man glaring at the readers saying, “You’re now a witness too,” encouraging people to take more active stances on the matter. 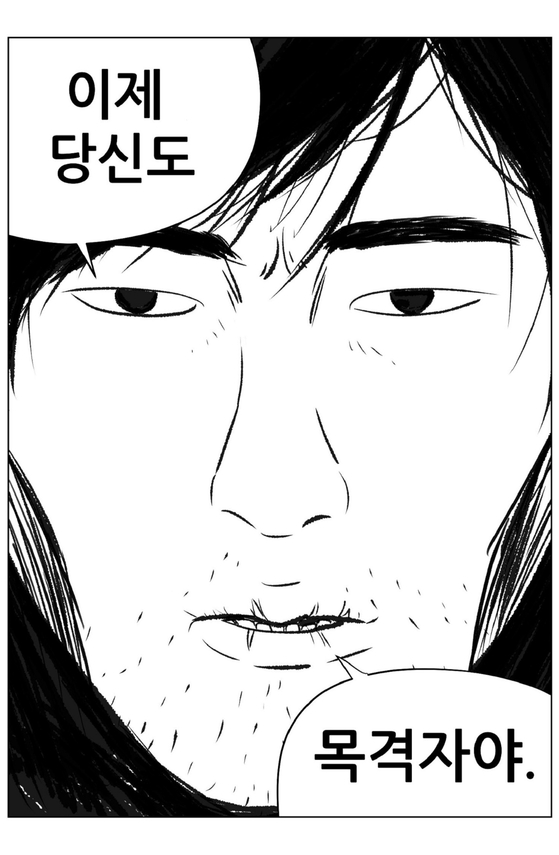 The last scene from the original webtoon "D.P. Dog's Day," where a man appears to gaze at the readers and says, "You're now a witness too" to the brutality of the military culture. [LEZHIN COMICS]


Kim, however, is still not satisfied with the awareness he's already raised. At a press interview last week, actor Jung Hae-in hinted that Kim and Han has already started working on a script for the second season.

“I still have so much left to talk about, so please stream the series more so that the second season can come out,” Kim wrote on Facebook on the day "D.P." was released.

“I hope more people can get the chance to watch ‘D.P.,’ so they can be aware of how many people have died in the military and how many are still dying today.”

Fighting the ghost of oblivion (KOR)