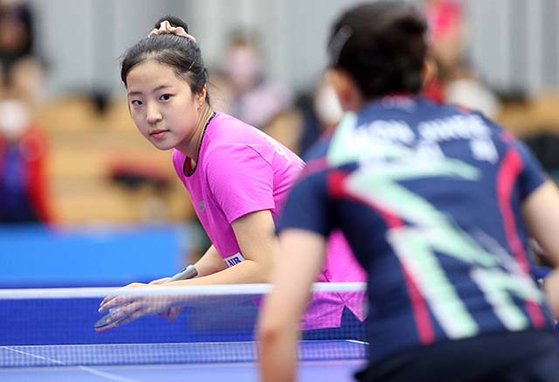 Shin Yu-bin faces Jeon Ji-hee in the round of eight at the 2021 Corporate Fall Presidential Cup on Thursday morning at Inje Stadium in Inje, Gangwon.


Shin Yu-bin lost to Jeon Ji-hee 3-1 in the round of eight match at the 2021 Corporate Fall Presidential Cup on Thursday morning at Inje Stadium in Inje, Gangwon.

Just last month, the two competed at the Tokyo Olympics as a team, reaching the round of eight but falling to Germany on Aug. 3. This time, they competed against each other in different teams: Shin as a Korean Air corporate player and Jeon as part of the Posco Energy table tennis team.

This is Shin's first time competing as a corporate player since she joined the Korean Air table tennis team last February. With matches canceled due to the pandemic, Shin headed right to the 2020 Tokyo Olympics without being able to play a single corporate match.

Shin is a table tennis prodigy having made the national team at only 14. She competed in her very first Olympic Games in Tokyo, becoming the youngest-ever table tennis player to represent Korea on the big stage.

But on the corporate stage, Jeon’s experience outplayed Shin. Jeon is ranked at world No. 14, the highest rank in Korea, and Shin is No. 82. Jeon also tops the Korean women corporate players’ table with 3130 points, whereas Shin has zero.

Jeon defeated Shin quickly in the first set 11-4. Shin was unable to find a way against the veteran player and conceded the second set as well. Shin seemed to have found her pace in the third set, as she bounced back with a big 11-2 win. She continued her good form into the last set and pushed the set into a deuce, but Jeon took the last two points and the match.